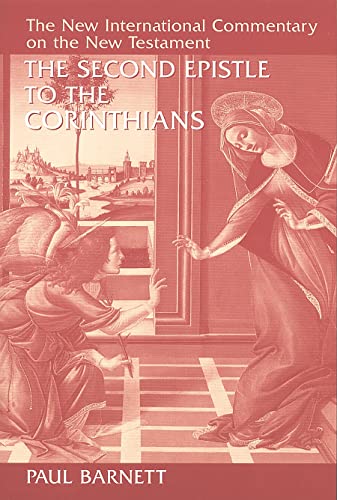 The Second Epistle to the Corinthians (NICNT)

The Second Epistle to the Corinthians by Paul Barnett (Bishop of North Sydney, Australia) is part of an endeavour by Eerdmans Publishing Company to rework volumes in the New International Commentary series in the light of the advances made in the field of NT scholarship over the last 20–30 years. The commentary on 2 Corinthians, originally done by Philip E. Hughes, has the distinction (along with Romans, 1 Corinthians, Galatians, Philippians, James, 1 Peter and 1–3 John) of being a completely new work by a different author -rather than a revisionary effort by the original author (as with John, Acts, Ephesians-Colossians-Philemon, 1-2 Thessalonians, Hebrews). Welcome changes include the fact that each pericope is introduced by the NIV (instead of the stiff cadences of the American Revised Version). Those without copious knowledge of Greek will find this commentary tough going. Page footnotes add 154 pages to the overall length (although about 50% are a mere referencing of the underlying Greek text).

Some of the Greek is transliterated and kept in the text (see, for example, 448 ‘gift [dorea]’ and ‘grace [charis]’) but most of the Greek is found in the footnotes in untransliterated form. Additionally, there is not always good co-ordination between the English translation in the text and the corresponding Greek in the footnotes. On page 43, for example, seven English words are italicised but only two corresponding Greek terms are underlined (footnotes 161–62). Also, English and Greek word order do not always correspond and the matching of terms is not always correct (see. for example, 42, ‘convinced … persuades … (being)’, while footnote 160 has peiqomen … sunecei … krinantes).

At points the volume is not terribly user-friendly. The language is not always gender accurate (e.g. 220 (4:4) = ‘he’ (the hearer) now ‘sees’). Cross-references are too few, and it is not always easy to find where something is treated. For example, text critical matters are dealt with in the footnotes at the beginning of each pericope. rather than under the specific verse in question. This would be all right if they were cross-referenced, but they are not. One also wishes that the critical issues surrounding the unity of the letter were given more attention. The author argues for the unity of the letter but only a scant paragraph is given to 2:14–7:4, 6:14–7:2, and chapters 8–9 in the ‘Introduction’ (with no cross-references to the commentary). A bit more attention is given to chapters 10–13, but not enough to explain the shift to biting sarcasm at 10:1ff. and the blunt warning, ‘I will not spare those who sinned earlier’ at 13:2—hardly what one would call anticipation of a ‘joyful reunion’ (386). The argument for unity would have been strengthened by observing that Paul’s expressions of confidence in chapter 7 fall in line with the typical arm-twisting formulae used in the body closing section of the Hellenistic letter.

The current series editor, Gordon Fee. identifies a single goal for the commentary, namely, ‘to bring the busy pastor and student up to date on the interpretation and theology of 2 Corinthians (9). The strength of this commentary is the latter; its weakness is the former. The volume is more of a biblical theology than it is a systematic exegesis of the text. In one respect the book fills a much needed vacuum today. Very little has been done in commentary format with the theology of Paul’s letters and the author takes great pains to tie together the theological threads of 2 Corinthians. His theological handling of 4:6–18 (which avoids Greek dualistic pitfalls) and 6:3–10 (the nature of the gospel ministry) are particularly good. His identification of Paul’s major challenge as that of Corinthian triumphalism is on target and the major theme as ‘power-in-weakness’ based on the motif of the resurrection of the crucified one is certainly correct. Another strength is the author’s first-hand acquaintance with a wide range of primary sources which help in setting forth the first-century religious and theological milieu. Also, the theologically focused introductions to each pericope are themselves worth the price of the volume.

However, if one is looking for the exegetical fine points of the text, this volume will surely disappoint. For one, there is little exegesis in the body of the commentary. Points of original text, grammar, word meaning, translation, cultural background and interpretative options (where they occur) by and large are relegated to the footnotes. Add to this the fact that often no rationale is given for the exegetical decisions that are reached. At times textual variants are preferred without carefully weighing the evidence (e.g. 159 n. 1 ‘our hearts’; 255 n. 2 ‘put on’, without mention of transcriptional probabilities). Scholarly alternatives are rejected without a specified reason (e.g. 258 n. 15 ‘Views to be rejected are …’). Conclusions are reached without adequate justification: e.g. 1:3: ‘Blessed be the God even the Father of our Lord Jesus Christ’ lacks a grammatical rationale and skirts the theological issue; in 3:14 the subject katargeitai means ‘the veil’, but in verses 7, 11 and 13 ‘the glory’; o de in 5:5 is actually transitional ‘Now he who’, following grammars and translations), not contrastive (“But he who”). Theology overrides context at points, e.g. in 3:12–13: ‘We are bold and not like Moses’ is a contrast between Paul and Moses, not between unveiled believers and veiled Israelites. Decisions quite often are theologically, not exegetically, driven (e.g. ‘freedom’ in 3:14–17 is from spiritual ignorance, not from an inability to keep the Law; in 6:14 ‘at the present time’ refers to the mundane ‘now’, not to ‘the day of salvation’).

If one is looking for interaction with the range of scholarly interpretation, this is also not the commentary to choose. There is little engagement with interpretive issues in the commentary proper. Even in the footnotes interaction with scholarly opinion is often bypassed or summarily rejected with ‘contrary to so and so’ (e.g. 262 n. 39; 265 n. 56). Sometimes scholarly advances are dismissed outright. For example, the author translates apokrima in 1:9 as ‘a death sentence’—even though Colin Hemer has shown that the term is not used in this way in first century Greek usage (Tyndale Bulletin 23:103–107). Kaphieuontes is translated ‘those who adulterate the word’ in 2:17, despite Scott Hafemann’s demonstration that there is no extra-biblical evidence for this meaning (Suffering and Ministry in the Spirit, Eerdmans). O de /kurios in 3:17 is equated with ‘the Lord’ Jesus (189), although Gordon Fee and others have established that the article + de + noun is a standard Jewish formula for interpreting words from a text that has just been cited (God’s Empowering Presence, Hendrickson). Emerging scholarly consensuses are eschewed with little discussion. According to the author, Paul’s opponents are Palestinian Jewish legalists, not charismatic Hellenistic Jews. The primary challenge at Corinth is continuing immorality and idolatry, not spiritual arrogance and anti-authoritarianism. During his last visit Paul was opposed by the leader of a libertine faction, not by someone challenging in principle Paul’s apostolic authority.

One disappointment is the lack of practical application. Only three and a half pages of a fifty page introduction deal with the letter’s application to pastoral ministry, and even here the author argues against application. One also wishes for some practical explication of the promise of divine encouragement in time of trouble (1:3–11), the need to reaffirm love for an erring member who has repented (2:5–10), the importance of not being outwitted by Satan (2:11), death as a going home to be with Jesus (5:6–8), new creation in Christ (5:17), being ambassadors for Christ (5:17), and the guidelines and models for whole-life stewardship in chapters 8 and 9—to name just a few. There are also some knotty problems that need clarification. Is Paul’s reverse psychology in chapters 8 and 9 a model we should adopt today? What in practical terms does Paul mean by being unequally yoked with unbelievers (6:14ff.)? Is Paul arguing for an equality of finances in chapter 8? And if ‘to receive God’s grace’ means ‘to be saved’ (as Barnett believes, 6:1–2), is Paul then saying that believers can lose their salvation?

Finally, the author’s reading of 2 Corinthians is hardly an unbiased one. The first person plural ‘we’ of chapters 1–13 is read as Paul’s self-conscious identity with the Isaianic suffering servant of Isaiah 40–55 and the second person plural ‘you’ is understood of ‘captive Israel’ (140). So much is this the case that Paul’s citation of Isaiah 49:8 in 2 Corinthians 6:2 becomes the key verse of the entire letter. To reject God’s grace is to reject God’s Suffering Servant (Paul) and so to miss out on salvation. The point is a crucial one. There are no models for pastoral ministry. There are no principles for the work of evangelism either. By limiting the ‘we-you’ of the letter to Paul-Corinth, all the lessons about ministry become uniquely Paul’s, the Corinthian church’s and no one else’s. So, for example, the godly grief that produces repentance and salvation in 7:9 applies uniquely to the Paul-Corinth relationship (374–76). There are a few places where the author widens the ‘we’ to include what is referred to as ‘the new covenant people’ (1:18–19; 3:12–18; 4:14, 16–5:10, 18a, 21). But why this should be so is far from clear. They just are. Yet, Paul did not write theology for theology’s sake. While it is important not to trivialise Paul or his teaching, it is also important to recognise that he addressed local congregations at their points of need. Paul as ‘a revelator of the glory of God in a way’ that can’t be duplicated or imitated is at odds with the numerous calls that Paul makes to colleagues and churches alike to imitate his life and his teaching (1 Cor. 4:16: 11:1; Gal. 4:12; Phil 3:17; 4:9; 1 Thess 1:6, 7; 3:7–9: 2 Tim. 3:10–11, 14).