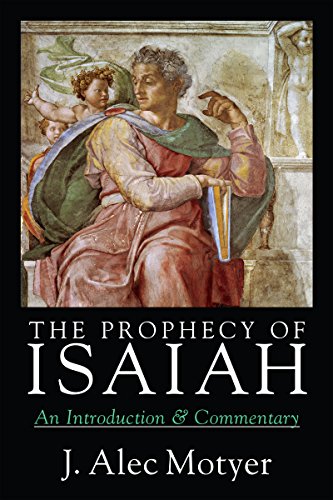 The Prophecy of Isaiah

Motyer’s book provides the fruit of many years of Evangelical research into the book of Isaiah. Motyer boldly challenges the approach which dates parts or all of the book to a period during and after the Exile. He emphasizes the unity of the book. The work can be divided into three parts, each of which presents a future Messianic figure as the king (chs. 1–37), the servant (chs. 38–55), and the anointed conqueror (chs. 56–66). Motyer’s reasons for a unity to the book stress the book’s style and theology. Stylistically, the unity of the work is suggested by the absence of many specific historical referents in chapters 40–55. For Motyer, these texts are stereotypical descriptions of deportation and of the fall of a city such as Babylon. They would not require any special prophetic insight. Therefore, the argument that these must be exilic texts because no one could have foreseen the events cannot be sustained. The exception to the conventional language, of course, is the mention of Cyrus. However, this must be a fundamental element of the prophecy. It demonstrates God’s superiority over all other deities as one who is able to foresee the coming of Cyrus long before the event.

Another argument from style is Motyer’s observation that Is. 39 includes a prophetic prediction of Babylon’s destruction of Jerusalem. This runs counter to a theme which is traced through the previous chapters, where Jerusalem and Judah are given promises of hope and blessing. For a prophetic text to end with this statement of judgment, with no means of resolving tire promised blessing, would be inconsistent with prophetic style. If chapters 40ff. did not exist, Motyer insists that it would have been necessary to invent them. This relationship also allows him to put the division between tire first and second parts of the work at the beginning of ch. 38 rather than at ch. 40.

Theologically, chapters 1–39 discuss six major concepts: Israel’s God as lord of history, Israel’s God as supreme over idols, the promise of a remnant, the reconciliation of God and the sinner, a restored Zion/Jerusalem, and the Davidic Messiah. These are also the emphasises of chapters 40–55. Thus Motyer argues that here is another indication of the unity of the text.

Motyer has provided important evidence for a unity to the work. Those who accept the authorship of most or all of the text as from Isaiah of Jerusalem in the eighth and early seventh centuries, will be encouraged by his arguments. Indeed, these are useful arguments for constructing a case. However, the case is not entirely made. It is still necessary to answer the questions regarding (1) the distinctive vocabulary and language in Is. 40–55, (2) the issue of religious monotheism and how it could have emerged before the period of Josiah, and (3) the mention of Cyrus. The first two are not insurmountable but are not addressed by Motyer. The third issue will probably remain the watershed between those who accept the possibility of predictive prophecy and those for whom such a phenomenon cannot occur in a naturalistic universe.

The strength of Motyer’s work lies in its careful study of the literary forms and of the arguments of the prophet. A prevailing trend in some recent studies to interpret the book’s organisation in terms of a chronological sequence of history or of tire life of the prophet (e.g. Watts and Hayes and Irvine) is rejected in favour of a conceptual structure and unity. Thus chs. 1–5 are not necessarily to be dated prior to ch. 6. Instead, they serve as an introduction to themes and problems which the ‘call’ of ch. 6 attempts to address. With such an emphasis, the rejection of Ahaz in ch. 7 becomes more than an example of unbelief. It provides the decisive turning point on which hangs the time and circumstances of the coming of Immanuel. Ahaz’s refusal to ask for a sign plunged Jerusalem into a century of domination and oppression followed by a complete loss of independence.

Scholars will not find many alternative views in the work. Several recent contributions to discussions of interpretation are conspicuously absent. However, this allows for an already lengthy commentary to carry forward its argument in a concise and direct manner. The work will find a welcome reception among preachers and teachers who seek assistance in understanding the argument of the whole book and the place of each specific text in it.