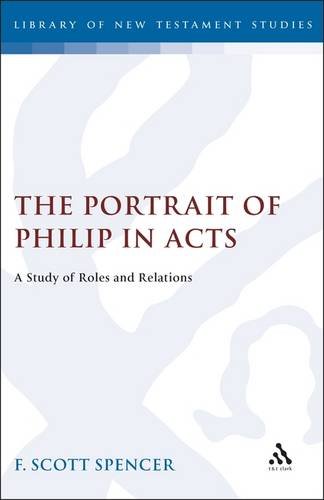 The Portrait of Philip in Acts. A Study of Roles and Relations (JSNTSS 67)

In line with contemporary trends in Acts research, Spencer has endeavoured to determine the literary Philippusbild of Acts. The book represents a substantially revised 1989 Durham University PhD dissertation, produced under the supervision of Professor J.D.G. Dunn.

Central to his research is the question what function the ‘character’ of Philip plays in the narrative of Acts. According to Spencer, Luke portrays Philip in a thoroughly positive fashion, notwithstanding Philip’s alleged failures (esp. the ‘apostasy’ of Simon Magnus and failing to impart the Spirit to his converts). The author distils three characteristic roles of Philip: (a) Philip as the ‘pioneering missionary’ (esp. Ch. 2, pp. 26–87; Ch. 4, pp. 128–187); (b) Philip as the ‘dynamic prophet’ (esp. Ch. 3, pp. 88–127); and (c) Philip as the ‘cooperative servant’ of Peter and Paul (esp. Chs 5 and 6, pp. 188–244, 245–270).

Regarding (a), Spencer attempts to show that Philip stands his ground against Peter and Paul, by not merely supporting their efforts but also by ‘trail blazing’ (p. 272) new frontiers of mission himself. Following the dispersion of Hellenistic Jewish Christians from the Jerusalem area, Philip emerges as the first itinerant preacher (cf. the first Samaritan mission, Acts 8:5–13, and the first Gentile mission, Acts 8:25–40), quasi as the forerunner of Peter (p. 273).

Besides his missionary endeavours, Philip stands (b) in the prophetic Moses- and Elijah/Elisha-tradition of a Spirit-filled preacher and miracle worker (cf. Acts 8:5–13). Together with Stephen, Peter and Paul he shares the fate of a ‘rejected prophet’. The reminiscence of an Elijah/Elisha model emerges in Philip’s encounter with the Ethiopian eunuch (who is never able to join fully the Jewish people!, p. 274). Much of these motif-historical and typological observations make interesting and partially convincing reading (cf. D.P. Moessner’s Lord of the Banquet, 1989, upon which Spencer builds). The danger lies, however, in overdrawing the parallels. Spencer claims, e.g.: ‘… Philip may be loosely regarded as a Moses-like leader spearheading the “exodus” of God’s people from oppressive territory (cf. 7:36)’ (p. 107). On that ‘oppressive territory’ (Jerusalem = Egypt?) later occurs the all-important first Christian council (Acts 15); what happened to Philip’s ‘exodus’?

Finally, Philip is (c) an integrative force in the early church (as narrated by Luke!) on account of his personal contacts with both Peter (Acts 8:5–25) and Paul (Acts 21:8; cf. Silas/Silvanus) as well as on account of ‘his various acts of Christian service’ (p. 275). We may ask in this context whether Philip is slightly overemphasized as a ‘partner’ of Peter (cf. pp. 211, 244; where does the egalitarian notion come from? From Luke or Spencer?).

Spencer comes to the following overall conclusion: ‘Philip is a multi-dimensional, “round” figure in Acts through whom socioreligious boundaries are crossed (pioneering missionary), scriptural links are established (dynamic prophet) and ministerial tensions are resolved (cooperative servant). The “Philip-factor” thus represents an integral component of the Lukan equation’ (pp. 275f.).

Spencer’s work appears to be a purely literary one in which tire obvious shortcomings of classical redaction-critical study are convincingly overcome (cf. his well-argued methodological criticism of redaction criticism, pp. 18–21). He thus stands in the tradition of Talbert, Minear, Tannehill (and I.H. Marshall, although the latter is equally aware of the historical dimension of Acts), while not completely participating in all the rules of either ‘composition criticism’ or ‘narrative criticism’ (pp. 21f.). From start to finish Spencer attempts to identify the ‘literary portrait of Philip’ through the eyes of Luke. The impression of a purely literary analysis is favoured by overly careful formulations such as the ‘Lukan Philip’ (p. 103; cf. the ‘Lukan Jesus’, p. 104) and the ‘Philip factor’ (p. 276).

Are we in the end dealing with a two-dimensional, literary figure dubbed ‘Philip’, which ‘acts’ on stages along the pursued plots of the author Luke, who in turn is not identifiable either as a person or history (cf.Spencer’s amply clouded reference to the author of Acts: ‘1 make no assumptions … regarding the historical identity of “Luke” other than that he (she?) was part of the “we”-group who travelled with Paul to Philip’s home’, p. 22 n. 2)? Are we analysing ancient novels and discourses called ‘Holy Scriptures’?

To avert this impression of a purely literary analysis, Spencer hints at the fact that he perceives his contribution as a necessary first step in identifying the historical person of Philip: ‘Ultimately, any sound assessment of Philip’s historical role within early Christianity must be coordinated with a thorough study of his literary role in Acts …’ (p. 16). The sequence of pursuing historical studies via literary analysis is convincing and acceptable so long as the literary analysis is not an end in itself: for example, the subject-matter related in Acts 8 begs to be taken beyond the level of literary analysis (especially in the light of Luke’s own stated purpose, Lk. 1:1–4). At least according to Luke, the dynamic message and sequence of narrated events surrounding Philip have their root and foundation in history.

Seen in this larger context, Spencer has contributed a clearly argued literary analysis which can be useful for further historical research on the topic, drawing attention to the fact that the prophetic ‘non-apostle’ Philip is portrayed as being highly instrumental in the early church’s expansion of the gospel beyond the limits of Palestinian Judaism.