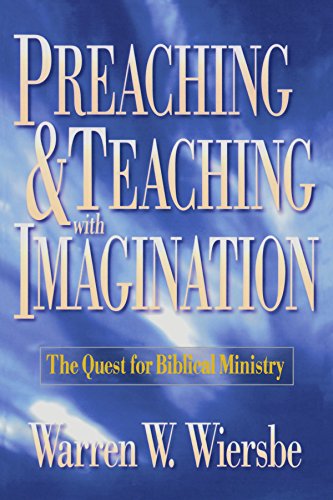 Preaching & Teaching With Imagination: The Quest for Biblical Ministry

In the last decade there has been a plethora of new books published on preaching, primarily by and for evangelicals. This book is a welcome addition to that recent corpus both because of the particular emphasis of the book and the fact that its author is a renowned pastor and homiletician. Wiersbe’s goal in writing the book is to help preachers communicate the Bible with power and vision so that people’s lives will be changed. For that to happen, in his view, the preaching and teaching of Scripture must be done with imagination.

Wiersbe argues that because people think in pictures and God has given us a universe full of pictures to draw upon, imaginative sermonizing is the art of using those various pictures to communicate biblical truth in a creative and relevant fashion. This approach, according to the author, is more than just using illustrations or anecdotes: it is employing metaphorical language to enable people to make the connection between themselves, Scripture and the world around them. His premise is that mere cognitive precepts make little impact on our lives. For real spiritual and moral change to take place, biblical truth must be taught through the use of images. This approach allows the listeners not only to learn the concepts of Scripture but, more importantly, to gain much-needed insight into how those concepts affect their lives individually and corporately.

Lest the reader fears that Wiersbe is on a slippery slope away from absolute truth with his emphasis upon imagination, it must be stated that he in no way sells short Scripture or the proper handling of it. He is faithfully committed to finding and then communicating the intent of the biblical author by using only the soundest of hermeneutical principles. There is no implication in this book of subjectivism, exaggeration, or an inappropriate use of the Bible. Instead, there is a constant plea by the author to allow the text to discipline the use of metaphors and images in preaching.

The book is neatly divided into three sections. In the first section, ‘Imagination and Life’, Wiersbe builds his case for the use of imaginative preaching by means of guiding metaphors in sermons. This portion of the book is very well argued, extremely insightful, and quite challenging. As both a pastor and a teacher of homiletics, I plan to implement many of his suggestions into my own preaching and teaching. The second section is an extended proof that tire entire Bible is an imaginatively written picture book. Wiersbe takes the reader on a survey of Scripture section by section, to illustrate the innumerable pictures, images and metaphors which the biblical authors used in order to communicate their theological concepts. While I appreciated Iris effort to demonstrate this point, I felt it was somewhat laboured. A shorter survey, focusing upon some of the more outstanding examples in both the OT and the NT, would have been more helpful. The last section, entitled ‘Imagination and Biblical Preaching’, is the most practically orientated of the three. In the nine chapters which compose this element of the book, Wiersbe focuses on a variety of aspects related to preaching and the pastoral ministry. Initially, he describes how to compose a sermon which is both textually based and composed in an imaginative, rather than in a merely precept-orientated, fashion. Then he moves on to the appropriate use of imagination in preaching on special occasions, at funerals, and in evangelism. This final section closes with a chapter exhorting the reader to preach the Bible biblically, that is, with imagination! Wiersbe’s long tenure as a knowledgeable pastor and preacher shines in this portion and will be of great benefit to anyone who reads his book.

This work has been thoroughly researched and very well thought out. In addition to a selected bibliography illustrating the spectrum of the author’s reading, the book contains three useful appendices related to various questions preachers ask, the history of the imagination and the relationship and difference between imagination and myth. While works on homiletics can sometimes bog down in the technicalities of sermon preparation and delivery, this one avoids those pitfalls. Although it does give attention to those aspects, it moves far beyond them to challenge pastors and preachers to become more creative in their pulpit ministries. It is a balanced and reasoned approach to the task of communicating God’s Word in a fresh way to the current generation. As such, it can be highly recommended as a very useful tool for students of preaching, pastors, and homiletics professors.