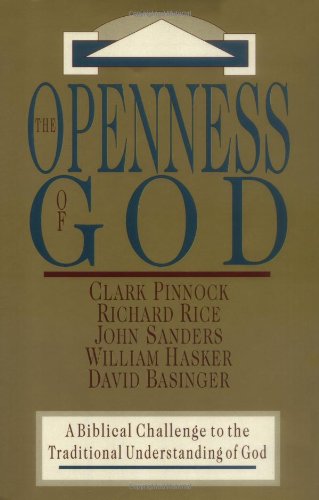 The Openness of God: A Biblical Challenge to the Traditional Understanding of God

The authors of this book, all Americans, come from across the sub-disciplines of theology, all broadly within the evangelical tradition and together amounting to an interesting and persuasive team. As the title suggests, the thesis of the book is that the traditional doctrine of God, espoused by all conservative theologians until very recently, is simply not biblical. Rather, the standard doctrine of God derives from Platonic thought, which fed into Christianity in the patristic era and established itself in the Middle Ages. The Reformation examined and corrected many aspects of medieval theology but failed to look at the doctrine of God, hence we are saddled with a theology which hardly does justice to the God of Abraham, Isaac and Jacob.

Moltmann and Pannenberg, among 20th-century theologians, have for some time been pressing this point. Moltmann’s The God of Hope rejected the God who hovers over history; Pannenberg likewise suggested that the God of the prophets was the God of the ‘open future’ rather than timeless. This work comes from a more evangelical stable and argues, similarly, that God must be redefined as the God whose being is engaged with history.

To argue this case the authors each take a chapter, presenting their thesis from biblical, historical, systematic, philosophical and practical perspectives. The work therefore seeks to overcome the danger of the fragmentation often found in collections of essays. The biblical angle, put by Richard Rice, is that while the Bible does indeed contain language indicating the radical transcendence and otherness of God as having complete control of the universe, the whole thrust of the Bible is that God relates to the world dynamically and in continuing and real covenant. ‘God interacts with his creatures. Not only does he influence them, but they also exert an influence on him. As a result, the course of history is not the product of divine action alone’ (p. 15). This puts the thesis in a nutshell. Rice argues that the life and death of Jesus supremely show this fact. Much hinges on one’s interpretation of divine ‘repentance’, which is interestingly discussed.

John Sanders takes us through a history of theology to argue that Greek metaphysics needs purging out of the biblical theology of God. In ways which warm the heart of Zizioulas, he argues that Cappadocian trinitarianism rejected ‘substance’ in favour of ‘relation’ as the primary Christian understanding of God, hence God is by nature relational, covenantal, responsive. It was the Western tradition, rooted in Augustine, that misled the Church by externalizing God from real relations with the world. Rejoice, King’s London! Modern process theology is attempting to tackle the problem, but has overcompensated by rendering God totally vulnerable to history. The systematic theologian Clark Pinnock takes his cue from this, seeking to show that a middle path is possible between classical theism and the process view, in that God is ‘open’ but also sovereign in a way which does confer genuine freedom on the world. ‘God is so transcendent that he creates room for others to exist and maintains a relationship with them,’ so powerful as to be able to stoop in humility, so secure as to risk suffering and change. God is so sovereign as to be an “ad hoc” God, able to rule by conferring freedom. God does genuinely enter into struggle in creation, yet there is no risk of his becoming degraded.

The philosopher William Hasker goes on to elaborate the logic of this approach in terms of divine everlastingness or divine timelessness, an issue much debated in British circles now; needless to say, real relations with time is the option taken, and argued forcefully with reference to the reality of human choice and knowledge—the practical outcome of this view of the God who is affected in a real way by our lives and decisions. Pastorally this is crucial.

The book puts an intellectually strong case. It is very American in its range of discussion: for example, Paul Fiddes’s important The Creative Suffering of God is not mentioned. The excellent Rutherford House symposium on this theme, The Power and Suffering of God, includes the response of Paul Helm, who defends the traditional view, to this revision of doctrine. Peter Vardy’s popular The Puzzle of God agrees that evangelical spirituality implies this ‘open’ God, and thinks that the less personalist Roman Catholic spirituality implies ‘timeless God’. The debate is excellent, why not join in by reading this?