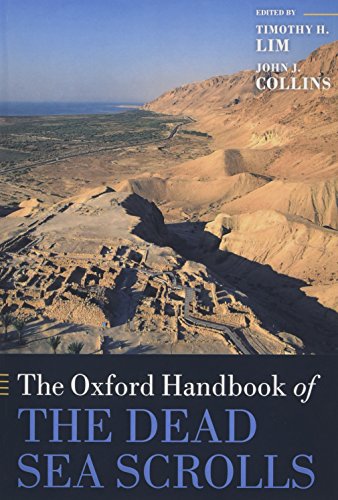 The Oxford Handbook of the Dead Sea Scrolls

This “handbook” requires both hands to handle its hefty size. But the strain will be rewarded by the careful reader. The editors begin with an introduction to “Current Issues in Dead Sea Scrolls Research” (pp. 1–20) in which they distinguish this book from other volumes, such as The Dead Sea Scrolls after Fifty Years (1998–99), Encyclopedia of the DSS (2000) and Dead Sea Scrolls Fifty Years after their Discovery (2000). This volume “seeks to probe the main disputed issues in the study of the scrolls” (p. 1). And they want to “reflect on diverse opinions and viewpoints, highlight the points of disagreement, and point to promising directions for the future” (p. 2). These center on a variety of topics, delineated in the eight parts of the book covering archaeology, Jewish history, sectarianism, biblical texts, interpretations and languages, religious themes, early Christianity, later Judaism, and new methodological approaches.

The first part of the book concerns archaeology of Qumran and the Judean Wilderness, with essays discussing the environs of Qumran (Eric C. Meyers) and reassessing the cemetery (Rachel Hachlili). Part two has three chapters that cover the broad subject of the scrolls and Jewish History: a construction of ancient Judaism from the Scrolls (Martin Goodman), the origins of the Teacher’s movement (Michael O. Wise), and women at Qumran (Tal Ilan). Five essays address “Sectarianism” and the Scrolls in part three. These works include discussions of Sectarian communities (John J. Collins) and the Essenes in classical sources and the Scrolls (Joan E. Taylor). Much of the Collins essay is expanded upon in his Beyond the Qumran Community: The Sectarian Movement of the Dead Sea Scrolls (Grand Rapids: Eerdmans, 2010). Other contributions consider sociological approaches to Qumran (Jutta Jokiranta), Qumran calendars (Sacha Sterm), and the Qumran Scrolls’ relationship to Enochic Judaism (James C. VanderKam). Part four assesses the subjects of biblical texts, interpretation, and languages with respect to the scrolls. This diverse group examines text-critical theories of the Hebrew Bible. For this subject, Ronald S. Hendel posits a model of textual development that is eclectic and multidimensional-stemmatic in nature, incorporating layers of editions, locales, social settings, and textual groupings. Also in part four Timothy Lim examines canon at Qumran, proposing a model based on Qumran’s actual citations in the pesharim and other sectarian texts rather than simply what is found in the collection as a whole. He finds the sectarians had a “bipartite” canon, including a fixed Torah and a somewhat fluid set of prophetical books. Molly M. Zahn’s article on “rewritten” scripture is also found here. She discusses the place of various Qumran texts in biblical trajectory, suggesting the so-called “rewritten” aspect is best charted as distinct points along a continuous sequence. Part four concludes with a comparison between Qumran and rabbinic biblical interpretation (Bilhah Nitzan) and the languages attested in the Scrolls (Jan Joosten).

A variety of religious themes are considered in part five, including purity (Jonathan Klawans), apocalypticism and messianism (Michael A. Knibb), and potential connections with Jewish mysticism (James R. Davila). Knibb’s article challenges the description of the movement as “apocalyptic,” due to the ambiguity of the term and the fact that the sect’s worldview was not shaped only, or even primarily, by concern about the eschaton. The ambiguity with respect to messianism in the Scrolls (one or two messiahs) suggests some of the documents’ eschatology exhibit means of coping with the fact that the sect’s interpretation of Torah was not accepted by other Jews. Other topics in this section are wisdom literature (Armin Lange), Iranian (Zoroastrian) connections with the Scrolls (Albert De Jong), and an assessment of identifying the Qumran sect as a “penitential movement” (David Lambert).

The three essays in part six concern the DSS and early Christianity. Here one finds discussion of critical issues pertaining to the Scrolls and the NT (Jörg Frey), monotheism and Christology (Larry W. Hurtado), and exegetical traditions (George J. Brooke). Frey’s analysis rehearses some of the more popular issues in the Scrolls in relation to the NT (John the Baptist, historical issues, messianism, etc.) to suggest that direct correlations are dubious but that comparative analysis does assist readers of the NT in gaining a wider perspective of its Judaic context. Hurtado’s work finds the dominance of a monotheism that allows for the existence of principal angels who were exalted agents of God, which serves as the context for binitarian Jesus devotion of early Christianity. Brooke’s contribution finds that the similarities in the interpretation of texts from the Hebrew Bible at Qumran and in the NT reflect some common exegetical tendencies of sectarians within the matrix of Second Temple Judaism.

The Scrolls and later Judaism is the topic for part seven, where questions of Halakhah (Aharon Shemesh), Jewish liturgy (Daniel K. Falk), and the Cairo Genizah (Stefan C. Reif) all receive attention. Finally, the eighth part of this book surveys recent approaches to the Scrolls, such as rhetorical criticism (Carol A. Newsom), the role of the reader in creating meaning (Maxine L. Grossman), and even some discussion of the legal definition of “authorship” with reference to the Qimron/Shanks legal proceedings (Hector L. MacQueen). A text index and a name index complete the book, and each essay is followed by its own bibliography.

Strangely, the editors’ summary of the essays in the introduction differs from the order of the chapters. The headings in the divisions of the book differ from the headings in the sub-divisions in the introduction as well. A number of important names in the field are not found here, such as James Charlesworth, Craig A. Evans, Jodi Magness, Gabrielle Boccacini, Peter Flint, Charlotte Hempel, Hannah Harrington, Lawrence Schiffman, Sidnie White Crawford, to name a few. Yet this is a stimulating volume, succeeding in its stated goal to expose readers to the diversity of views in the field. As such it is a welcome reference tool. Pride of place for an introduction to the entirety of the field still remains with James C. Vanderkam’s The Dead Sea Scrolls Today (2nd ed; Grand Rapids: Eerdmans, 2010).