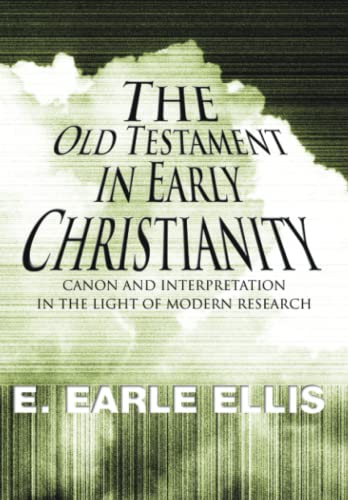 The Old Testament in Early Christianity: Canon and Interpretation in Light of Modern Research

This book is a collection of previously published essays by an internationally known evangelical scholar, E. Earle Ellis. The volume contains three lengthy essays and two appendices. They share a common concern for understanding the formation of the OT and its interpretation by the early church. In various ways, Ellis attempts to demonstrate in these essays a point made in the last paragraph of the book: ‘The New Testament’s use of the Old Testament lies at the heart of its theology.… It unfolds a hermeneutical perspective that will deepen one’s understanding of the biblical message …’ (p. 156).

The first essay, ‘The Old Testament Canon in the Early Church’, explores the historical development of the church’s Scripture, first in relationship to the canon of Judaism and then in delineating the rationale by which the church could use, yet distinguish, canonical and non-canonical writings. In the process, Ellis explores the canonical affirmations of a number of ancient sources. From his investigation, Ellis concludes: ‘In its conception of the Old Testament the messianic community of Jesus differed from the mainstream of Judaism not in the content of its Bible but in the interpretive key that it used to open the Bible’ (p. 36).

It is that interpretive key or hermeneutical process that Ellis takes up in the second half of this essay. Here Ellis challenges the popular and widespread three-stage canonization theory, namely that the Law was ‘canonized’ around 400 bc, the Prophets c. 200 bc, and the Hagiographa during the time of Jamnia (c. ad 90). Instead, he argues that the community of Jesus had the same OT canon as other groups in first-century Judaism. The difference was a hermeneutical one in which the OT was ‘contemporized’ for a new situation and in light of what God had done through his Son, Jesus Christ.

The second essay, ‘Old Testament Quotations in the New: A Brief History of the Research’, provides a valuable survey of how Christian writers have understood the appropriation of the OT by the NT from the early church until the present day. After briefly examining the second to the 19th centuries, Ellis explores the most popular theories of the 20th century regarding the relationship between the NT’s use of the OT, and among others, (1) the ‘testimony book’ and targumic translations, (2) typological exegesis, (3) midrash, and (4) exegesis at Qumran. The footnotes of the essay have been updated to include works published as late as 1990.

In the third chapter, ‘Biblical Interpretation in the New Testament Church’, Ellis advances his own theory: the NT writers employed a christological exposition of the OT heavily shaped by the exegetical method of Jewish midrash and underpinned by certain presuppositions regarding eschatology, typology, corporate personality, and the notion of Scripture as a hidden Word of God, all inherited from Judaism but given a distinct Christian spin. The two appendices address specific points mentioned in the earlier essays. The first is on ‘Jesus and his Bible’; the second is on ‘Typological Interpretation—and Its Rivals’.

Like any collection of previously published articles, this book has its weaknesses. It is odd in a book of only three chapters and 157 pages of text to have a total of nearly 20 pages included in two different appendices. Furthermore, a couple of topics are treated extensively in two or more of the essays, creating some unnecessary repetition. This problem is especially acute with the subject of typology, which Ellis treats on pp. 46–49, 61–63, 72–73, 105–109, and in Appendix II, with much redundancy. A similar point could be made with the repeated discussions of ‘midrash’, though it is unlikely that those who come to this book sceptical of the pervasive presence of explicit and implicit midrash in the NT will leave convinced, despite the repeated references to it.

A more pressing problem with this book is its failure to engage some of the more recent works which have appeared since the articles were first published. To be sure, Ellis refers to most of the recent studies in footnotes (especially in ch. 2), but he does not always take their positions into account in his text. To cite one example, Ellis argues that what set the early Christian community apart from Judaism was neither its canon nor its exegetical method, but rather the christological or messianic perspective with which the early Christians approached the OT. This view sounds very similar to the argument advanced recently by Donald Juel in Messianic Exegesis (1988). Students would have profited from a discussion by Ellis of points of similarity and difference between his work and Juel’s book.

Still, this is an important book and a helpful introduction to the issues surrounding the early church’s appropriation of its inherited Scriptures. Once again, Earle Ellis has proven an able guide through the maze, and once again has placed us all in his debt.