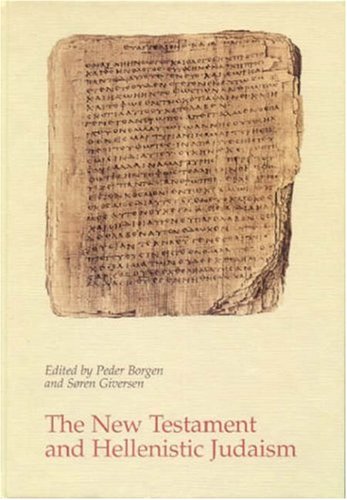 The New Testament and Hellenistic Judaism

Eight years ago a conference was convened in Aärhus to investigate to what extent the NT was influenced by the matrix of its Hellenistic Jewish environment. Given that a substantial part of the NT was written outside of Palestine (or for audiences outside of Palestine), the question of Hellenistic Judaism needs to be taken seriously. If, for instance, Hellenistic Jewish views of the covenant differed from those in Palestine this might have influenced the way the NT reflected on the relationship between Christ and the Jewish covenants. Needless to say, one would not want a return to the days when Palestinian Judaism and Hellenistic Judaism were regarded as two distinct Jewish phenomena. This volume does not favour such a dated position, but it recognises, quite rightly, that an in-depth understanding of the Diaspora helps significantly to understand major portions of the NT.

Giversen takes up this matter of covenant in the first essay and focuses on the Epistle of Barnabas. He sees the Epistle of Barnabas as a radical extension of the Pauline letters and Hebrews in that it challenges certain Jewish understandings of covenant. It differs from these other letters, however, by generally adopting a less positive view of the Jewish religion as such. Hartman demonstrates how the Jewish Bible was used in the Diaspora for shaping people’s worldviews. There are some useful hints here, but the problem of such whirlwind tours is a certain lack of depth and focus. He is followed by Walter’s look at interfaces between Hellenistic Judaism and the cradle of early Christianity. He concludes that Jewish views of the universal appeal of the Torah were determinative in the formation of early Christianity.

De Jonge picks up the question of the Jewishness (or otherwise) of some OT Pseudepigrapha and notes that not enough certainly about the backgrounds of these writings has been achieved to allow them to speak to us decisively about early Judaism or the origins of early Christianity. Charlesworth highlights various magical texts, which portray King David as an exorcist, and wonders if these texts ultimately go back to traditions about Jesus as exorcist. Here too the main conclusion is a rather general one, namely to emphasise the complexity of the Hellenistic world. A further essay with somewhat general ambitions is that by Yarbro Collins. She uses ancient texts on apotheosis and divine translation to throw light on some resurrection texts in the NT and claims to have detected different emphases, either on resurrection as revival or, sometimes, as translation. Pilgaard considers the merits of the theios aner thesis which some have applied to Mark’s Gospel. He rightly rejects such an approach to Mark on the ground that Mark’s use of the Son of Man motif owes more to Jewish creation/re-creation traditions than to Greco-Roman anthropology. Even more specific is Nissen’s contribution that seeks to relate the NT’s love command to Hellenistic Jewish parallels. The distinguishing features of the NT command include (of course) the christocentricity and the specific emphasis on the need to love one’s enemies.

Three articles turn to Philo with a view to improving our understanding of Galatians 4 (Hagar and Ishmael traditions—by Borgen), 1 Corinthians 10 (anti-sacramental? anti-idolatry? or anti-over-confidence?—by Sandelin) and Romans 10 (use of Deut. 30—by Bekken). Borgen ends with a note of highlighting the importance of Galatians 4 within Paul’s argumentation against Judaizers. Sandelin opts for interpreting 1 Corinthians 10 as being directed against idolatry and Bekken is confident that Paul’s use of Deuteronomy 30 in Romans 10 falls well within common Jewish exegetical techniques. Hyldahl’s and Willert’s contribution are also about Paul, but they proceed by surveying a more wide-ranging array of Hellenistic Jewish texts. In the Corinthian correspondence, according to Hyldahl, Paul reacts against an Alexandrian understanding of the gospel represented by Apollos. He prefers to subordinate philosophy to the gospel. This is despite the fact that Paul himself would have been exposed to Hellenistic Judaism both in Palestine and in the Diaspora. Willert agrees with this last point, but he too stresses that Paul the Christian came to a position where the earthly Jesus mattered a great deal more than is commonly assumed for Paul. This Willert argues especially with reference to NT hardship catalogues. Somewhat atypical is Davidsen’s closing essay, which applies semantic analysis to parts of Romans 5, the point being to clarify the precise logic of the Adam-Christ typology developed there. It is not entirely clear how this chapter fits into the framework of the volume as a whole.

This is a fairly substantial collection of essays. As one would expect, the quality of individual contributions varies, and so does the degree of precision and relevance of the conclusions reached. Apart from the overarching topic embodied in the title, there is no particular framework, which would have forced the contributors to interact with each other. Some essays are related by topic, others are decidedly not so. Some conclusions are specific and worthwhile, others (as could be seen above) are too general. Publications of conference contributions tend to be a mixed bag. To a degree this is also true here, but the book is useful to demonstrate to students what Hellenistic Judaism is about and how studying aspects of it can enhance one’s understanding of individual NT passages. It also functions quite well to give readers without first hand knowledge of these primary texts a feel for their contents and importance.