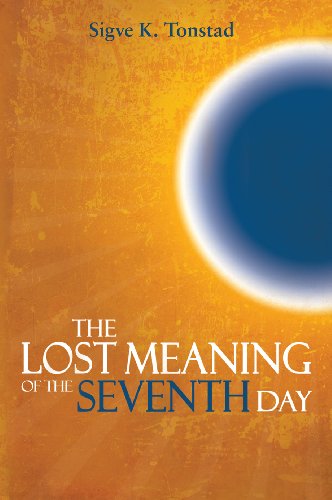 The Lost Meaning of the Seventh Day

This book is an apologetic for a Seventh Day Adventist reading of Scripture, but it is much more. The author shares a personal vignette from his childhood about the importance of the Sabbath while growing up in Norway (p. ix). The Sabbath was a special celebration of food and fellowship that helped to soften the rigors of the rest of the week. This story simply shows that Tonstad is doing more than defending an understanding of the Seventh Day that has fallen on hard times; he is celebrating something that has held a special charm for him since childhood.

First, the introduction shows that this study serves as a sweeping study of the Seventh Day, while also making a sweeping claim for the Seventh Day: it serves as a theological symbol for God’s faithfulness. In other words, the Seventh Day is a stirring reminder that God will set to rights all the wrongs of the world. The author admits that these claims seem “extravagant,” but he writes the rest of the book to show that they are not as “pretentious” as they sound (p. 2).

Second, the author’s study of the seventh day in the OT highlights the trajectory it sets for both creation and redemption. In chapter 2, Tonstad begins with creation (Gen 2:1–3), which stresses the “enchanting aura of distinction” that God gives the seventh day in blessing and hallowing it (pp. 20–21). The focus shifts in chapter 3 to discuss the entrance of the fall into the narrative, which further suggests that the seventh day is not merely a backward-looking memorial, but a promise that highlights God’s presence and his “commitment to make right what went wrong” (p. 59). Chapter 4 attempts to bridge a noticeable gap between Gen 2 and Exod 16. If it was so important, why did the Patriarchs not explicitly observe the Sabbath? Tonstad argues that though it is never explicit, we should assume that Gen 26:5 implicitly mentions Abraham’s Sabbath observance because he kept all of God’s laws and there is no need to say anything because he “already grasps the unspoken ideal” (p. 71).

Chapters 5–10 trace the meaning of the seventh day in the rest of the OT. The seventh day is a distinctive marker for Israel’s freedom and the ongoing promise of God’s presence (p. 90). God’s faithfulness is “the cornerstone” in the “reciprocal” relationship between God and Israel (p. 107). Furthermore, just like the American flag stands as a symbol to “cement and commemorate the birth of a new country,” the Sabbath serves as a symbol that “keeps alive the identity-shaping event of creation” and recalls “God’s gracious intervention in Israel’s deliverance from Egypt” (p. 116). The Israelites lack of social concern shows that they have not grasped the true meaning of the Sabbath (chapter 8), but God’s faithfulness once again emerges as a central theme for the prophets as they offer hope in the midst of judgment and despair. This hope extends even to foreigners through Sabbath observance as highlighted by Isa 56 (ch. 9), while the Sabbath passages in Nehemiah show the attempt to cultivate a spiritual rebirth that will recover Israel’s identity, even if it involves coercive attempts to preserve the Sabbath (ch. 10).

The third section of the book addresses the use of the seventh day in the NT. Chapters 11–12 highlight that the healings of Jesus on the Sabbath and his concern for human need demonstrate God’s faithfulness because the Sabbath is the “pledge of God’s healing, restoring presence” (p. 220).

Tonstad also includes extended discussions of Gal 4:10 (ch. 13) and Col 2:16 (ch. 14). The author makes much of the faithfulness of God as a theme in Galatians along with an interpretation of the “faithfulness of Christ” (p. 237) as an identity marker emphasizing inclusion over against the Judaizing efforts towards exclusion (pp. 242–43). He also follows Troy Martin in taking Gal 4:8–11 as a reference to the Galatians returning to paganism, not a turning to the practices of Judaism (p. 231).

Tonstad follows Troy Martin (again) so as to affirm “actual Sabbath-keeping in Colossians” (p. 265) because Col 2:16 means that the Colossians should not let the opponents judge them as they practice their festivals, new moons, and Sabbaths. Furthermore, Col 1:15–17 shows that Christ is the Creator as well as the Restorer, which “proves the faithfulness of God” (p. 274). Tonstad’s final NT chapter on Heb 4:9–10 (ch. 15) also sees Hebrews as a “sabbatarian message” centered on the faithfulness of God because even though the Sabbath rest is coming in the future with the return of Christ, Christians can enjoy it now through the Sabbath (p. 293).

Fourth, Tonstad claims that the loss of the significance of the Seventh Day has impoverished the relationship that humanity has with God and His creation. This loss of meaning has led to consequences that are nothing short of epic in terms of the alienation between Jews and Christians (especially the holocaust), and (2) the estrangement of Christianity from the material world.

This study shines with two primary strengths. First, Tonstad’s study brims with passion. Reading this type of work is a rewarding exercise (even if one disagrees with the author) because one is never left in doubt as to what the author believes and why he writes as if it is so vitally important. Second, I loved the author’s emphasis on the faithfulness of God because it is an element of the biblical texts that tends to be underdeveloped in discussions of the Sabbath. Tonstad is right to point out the stirring reminders found in these texts to center our thoughts on God’s unshakeable plan to set all things to rights.

In the end, though I found Tonstad’s study helpful on many levels, his overall position left me extremely unconvinced for several reasons. First, his argument from silence connecting Abraham to the Sabbath based on Gen 26:5 failed to convince. Second, Tonstad’s treatment of the move from the seventh day to Lord’s Day in the Early Church was consistently too one-sided. He invariably was too quick to chalk up this movement to Anti-Semitism and Platonic or Hellenistic (pagan) influence (pp. 308–14).

Third, I appreciate his emphasis on the faithfulness of God, but it is overused as an argument for the continuity between the Testaments, even when the textual evidence calls this continuity into question. His rough and ready argument is that since God is both Creator and Redeemer one should not expect major shifts in salvation history between creation and redemption. The NT texts, however, will simply not allow a one-sided approach to either continuity or discontinuity; an argument based on God’s faithfulness cannot resolve the tension simply by muting one half of it.

Fourth, Tonstad’s reading of Paul was the least persuasive and the most problematic. The author frequently appeals to the nature of God’s faithfulness and the polemical context of Paul’s writings. In fact, the author states that the narrative of the Gospel takes precedence over the situational nature of Paul’s letters, which means that we should be slow to affirm that the “Sabbath that we find in the Gospels will be disaffirmed by Paul in his letters” (p. 227).

Three problems abound in his treatment of Paul: (1) he does not orient the reader to Paul’s broader view of the Law; (2) he strangely ignored Rom 14:5; and (3) some of his exegesis seems strained and unpersuasive. He often speaks out of two sides of his mouth with regard to Paul. On the one hand, Tonstad adopts readings that make Paul a Sabbatarian, while on the other hand, he hedges his bets and reminds us that Paul is an unreliable guide because he is too polemical to contribute positive assertions about the Sabbath.

He surprisingly follows Troy Martin’s idiosyncratic readings of Gal 4:10 and Col 2:16, even though his reconstructions are highly speculative and uncertain at best, which renders as suspect any conclusion based upon them. Tonstad consistently wants to mute or muzzle anything that might be critical of Judaism. This concern shows up repeatedly in his treatment of the Pharisees (e.g., pp. 206–7), his allegiance to the New Perspective on Paul, and his omission of any mention of the obsolescence of the Mosaic Law in Hebrews.

In conclusion, I find Tonstad’s study fresh and stimulating in many ways. Unfortunately, Tonstad’s arguments outstrip the evidence too many times, which renders much of his book unreliable.