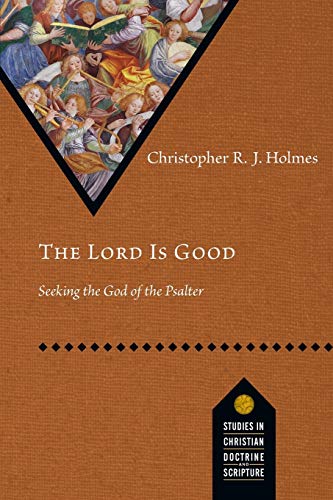 The Lord Is Good: Seeking the God of the Psalter

The “classical” tradition of Christian theological reflection is often accused of leaving God at arm’s length from his creation, eliding all meaningful discussion of human existence. If one desired to challenge such assessments, a good place to start would be Christopher Holmes’s The Lord is Good (dedicated to the late John Webster). Holmes discusses the divine attributes with attention to divine goodness, “the preeminent claim the Psalms make with respect to God” (p. 1). Unlike the christocentric approach to the attributes which has predominated since Karl Barth, Holmes prefers to “think theocentrically,” moving back from God’s outer works to contemplate “how God is ordered to himself apart from the world” (p. 3). In doing so, he joins up Katherine Sonderegger’s “compatibilist” account of the God/world relation with Thomas Aquinas’s effort to utilize the Psalter as a comprehensive resource for theology.

Throughout the study, Holmes pursues two goals. The first is “to follow Scripture’s lead in distinguishing between what is said [of God] in a substantial or essential sense and what is said in a relational sense” (p. 4). Accordingly, Holmes first concentrates on God in se. Chapter 1 discusses divine simplicity, which states, among other things, that God alone is one whose essence is to exist. Chapter 2 describes the “unceasingly active goodness” of God, using the language of pure act (p. 33). Here Holmes establishes that while goodness is predicated of God essentially, considered relatively it is the Spirit to whom are appropriated the works of life-giving and governance on account of which “goodness” is most properly predicated. Chapter 3 follows the Psalter in speaking of one goodness. The chapter’s most arresting claim is the idea that all the divine attributes, save the “omnis” and the persons’ relational designations, are transcendentals—attributes that “leap across categories,” and are thus “properties that all things possess by virtue of their participation in God’s perfection” (pp. 66–67). Chapter 4 shows that creaturely goodness is good only to the extent that it wills what God wills – namely, God himself. Goodness, then, is the God who delights in communicating himself to the created order.

Holmes’s second goal is “to think through how goodness functions as the principle of intelligibility for creation but also the explanation for God’s ongoing presence in and to created things” (p. 6). That work begins in earnest in Chapter 5, which discusses the difference in how goodness is predicated of God and of the world, establishing that “the Creator is not extrinsic to his creation but intimately present to it” (p. 98). Chapter 6 discusses evil as a desire for “being but only in relation to ourselves” (p. 117)—a desire which, on the supposition that God is his own relation to the world, can only result in the creature’s “frenetic … advance toward nothing” (p. 118). Chapter 7 argues that the law, in inciting the cry to be taught (p. 146), expresses God’s goodness according to its own mode. Chapter 8 shows that there is no diminution of divine goodness in the Son’s incarnation; the incarnation changed the assumed human nature, but in no sense altered the goodness of the Son. Chapter 9 focuses on “the renewal of the Creator/creature distinction.” Earlier in the book, Holmes asserted that it is the task of theology patiently to discern the “implications of divine aseity for faith and practice” (p. 88). The result of that task finds expression in a dense thesis about the creature’s telos: “The last end of every creature is for that creature, in all its fullness, to share in the Lord’s goodness, participant in a manner befitting its mode of being in what is common to the three” (p. 171).

Some readers may regard Holmes’s appropriation of the neo-Thomist tradition as ill-suited to what Michael Horton has called the “covenantal-ethical” dimensions of much Reformed theology, or as liable to collapsing the Creator/creature distinction (though Holmes’s final chapter argues the contrary). Others may find it off-putting for asserting a real distinction between God and creatures, emphasizing God’s transcendence at the cost of denigrating God’s good creation; something like this claim is involved in Veli-Matti Kärkkäinen’s “classical panentheism.” Still others might perceive Holmes as capitulating to Radical Orthodoxy’s criticism of the Reformation as ushering in secular modernity through its rejection of participatory metaphysics; though it is not clear that all Reformed Orthodox theologians did so, or that Radical Orthodoxy’s claim is incontestable. Courtesy might have encouraged a gentler lead for an evangelical readership, perhaps in dialogue with Chapter 4 of Kevin Vanhoozer’s Remythologizing Theology: Divine Action, Passion, and Authorship (Cambridge: Cambridge University Press, 2012). Nevertheless, The Lord is Good states its approach clearly and deals with such concerns throughout.

The Psalms “demand a kind of moral and spiritual fitness” (p. 7). So too does Holmes’s deeply theocentric ascetical theology. Holmes contemplates the goodness of God to rouse the affections to desire God. Knowing God requires the pilgrimage of discipleship, “the affective dimension [which] is essential to any treatment of the metaphysics of God’s life” (p. 47). Holmes exhorts the theologian to aspire to become the kind of person with the moral and spiritual fitness requisite for inhabiting the Psalter. For him, as for Augustine, it is in the end gastronomy – the belches and shouts of prayer and praise engendered in and by the Psalter—that provides the mode of theological discourse most befitting the goodness of the Lord.