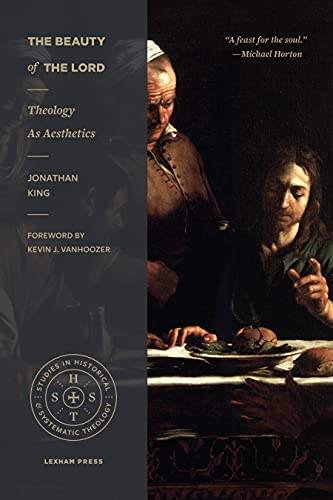 The Beauty of the Lord: Theology as Aesthetics

Eugene Peterson commented during his long years of ministry on the emptiness of great parts of the church. In one of his accounts of a pastoral call he describes a church in “soggy suburbia” where no one read books or discussed ideas. His people, whom he actually shepherded and loved, were characterized by a “stunted imagination” having abandoned the blazing glory of Christian vocation (Eugene Peterson, Under the Unpredictable Plant [Grand Rapids: Eerdmans, 1992], 156). In the face of such bankruptcy, plus the ugliness of our world, many evangelical Christians are turning to the beautiful for renewal. Though hardly altogether absent from theological discourse, Jonathan King argues that beauty has been seriously underplayed, particularly by Protestants.

The Beauty of the Lord contains many virtues. It is deeply learned. The author draws widely and deeply from all kinds of sources, as well as directly from Scripture. Although the writing is dense, his central thesis is easily stated. It is best to quote him directly: “My working hypothesis is twofold: first, beauty corresponds in some way to the attributes of God; second the theodrama of God’s eternal plan in creation, redemption, and consummation entails a consistent and fitting expression and outworking of this divine beauty” (p. 23). Because Jesus Christ is its perfect exhibition, King centers on the incarnation as the “critical lens for seeing God’s beauty” (p. 23).

For the author beauty is a divine attribute, mostly connected to the glory of God. Though a number of Old and New Testament words are translated into beauty, the one that most consistently is concomitant to beauty is glory. King argues that glory is both ad extra, expressing itself in God’s outward works, and ad intra, emanating from God’s own being.

But what is this glory specifically? King most often defines glory, and thus elucidates the nature of beauty, by fittingness. We encounter this theme particularly in the writings of Anselm of Canterbury. It is present as well in Thomas Aquinas, Jonathan Edwards, Hans Urs von Balthassar, Bavinck and Barth. More recently we meet the expression in Nicholas Wolterstorff’s book Art in Action: Toward a Christian Aesthetic (Grand Rapids: Eerdmans, 1987), which King mentions, among his hundreds of allusions and citations.

King notes the original creation as one of beautiful design, with human beings, the crown of God’s work, image-bearers with a royal status. Among the most elegant pages in this text are those describing the ways in which we, as image-bearers, conform to the divine original. Quoting Cornelius Van Til he affirms that we are God’s “analogs” (p. 120). This has important ethical implications, such as the complementarity of man and woman and the love of neighbor. It will also have implications for God’s judgments, which must in every way “fit” the crime they address.

With this in mind, when King describes the fall, it is mostly in terms of falling short. The image of God is marred. Man’s being is perverted (p. 131). Quoting Calvin he asserts we have not lost the image, but we have lost our beauty and dignity (Institutes, 3.7.6). We are marred by sin, or “malformed by sin” and thus can no longer properly image God (p. 79). The fall is described in aesthetic terms. Following Jonathan Edwards, he says those who are eternally lost will see all of Christ except his “beauty and his amiableness” (p. 302).

When it comes to the incarnation of Jesus Christ, who is at the center of these thoughts, we are confronted with “beauty condescending” (ch. 4). Christ altogether fittingly becomes man and interacts with us, and then leads us to the place Adam failed to go. King rightly (in my view) avoids the temptation to say his true beauty, that is the glory of his divinity, is somehow veiled by his humanity. King defends the traditional view, bolstered by Chalcedon, that differentiates between his states (humiliation followed by exaltation) from his nature (always God, then adding human nature to the one Person). The glory of his divine nature was never obscured by his humanity, even at the cross.

King’s understanding of beauty centers on “fittingness”: harmony, design, shapes, etc. There is a good deal to affirm about these notions, though at times I had the impression that they owe more to Plato than to Scripture. King commends the divine plan for its “symmetrical design” (p. 88). If one means by that the plan evidences a successful beginning and a desired end, there is no quarrel (Romans 11:33–36). Yet a great deal that deserves to be called aesthetic is not so lofty. How did the Book of Judges make it into the canon? Or Psalm 88? It will not do in my judgment simply to fold them into a larger design or look for a silver lining. Indeed there is a strong and well-crafted aesthetic to them, but little beauty.

Missing here is Martin Luther’s declaration that true theology is much less about glory than about the cross. I found no references to Luther at all. Nor were there any to Calvin Seerveld, the Reformed philosopher of aesthetics who has contributed so much to these kinds of discussions. Seerveld cautions against the trend to take refuge in “beauty” since although beauty does belong to God, there is so-called beauty which does not. He notes from the visual arts, for example, Mondrian’s highly symmetrical primary colors and right-angles which exhibit plenty of harmony, design, etc., but no humanity. There is also skillful but superficial academic beauty (such as William-Adolphe Bouguereau) and there is seductive lustful beauty (such as Francisco Goya’s Maja), neither of which communicate the realistic, morally pure, but earthy, sometimes messy, strategies of the Lord (see Calvin G. Seerveld, Bearing Fresh Olive Leaves (Carlisle: Piquant, 2000), 102–15; also Rainbows for the Fallen World (Toronto: Tuppence, 1980), pp. 116–25). Do we not tend to overload the term and lose its usefulness?

I sense here an imbalance in King’s elevation of beauty. Moral uprightness is more, though not less, than a return to glorious symmetry. The costly forgiveness of sins acquired at the cross, which was a shameful, bloody, cruel torture, is far more, though not less, than a “due proportionality between punishment and crime” (p. 231). And redemption is far more, though I suppose not less, than a “theodrama.” It is the stark, in-your-face, deadly serious reality of a God who so loved his people that he mixed it up with sinners, offering them healing and freedom from guilt. His incarnation, eternally human as well as divine, is not just fitting; it is mind-boggling.

Having said these things I do hope for the day when we do more justice to the aesthetic dimension of the Bible and of life itself. Jeremy Begbie has suggested that not only is the Bible our guide to aesthetics, but aesthetics can help us better understand the Bible. Can we practice that without falling into an excess? Perhaps we should simply separate the two words: beauty and aesthetics. Some of those believers described by Eugene Peterson are presently so reacting against the dryness and lack of imagination that they are in danger of over investing in beauty! Let’s put all these issues on the table and discuss them with iron sharpening iron. A word of thanks to Jonathan King for leading the way.