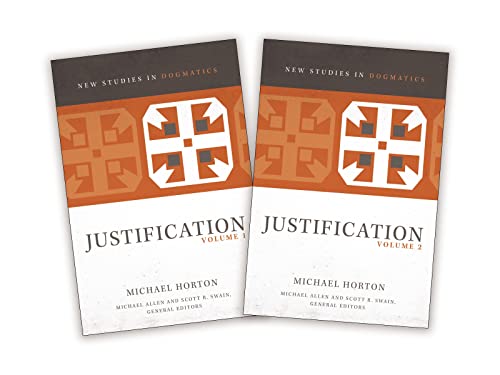 It is difficult to understate the importance of the doctrine of justification. Exegetically, it occupies considerable portions of the correspondence of the apostle Paul. Theologically, it touches upon a wide range of biblical doctrines—covenant theology, the atonement, and sanctification, for example. Historically, it has shaped the last half millennium of the Western church, defining the Protestant and Roman Catholic communions that formed in the wake of the Reformation.

Michael Horton’s two-volume Justification is an ambitious and panoramic effort to address the doctrine in its exegetical, biblical-theological, systematic, historical, and contemporary significance. The first volume concentrates upon the doctrine in its historical development. Horton argues that the patristic writers’ statements concerning justification stand in fundamental continuity with the later doctrine of the Protestant Reformers (1:75–84). It was the ambiguity within Augustine’s formulations, however, that both spawned medieval understandings of justification as a transformative grace, and provided the Reformers the resources to restate the biblical doctrine (1:84–91).

Horton tracks the development of the doctrine in the works of Scotus, Ockham, and Biel, arguing that late medieval understandings of justification were not only semi-Pelagian but also wedded to the sacrament of penance (1:162). It was against this doctrine that Luther and the other Reformers protested. In doing so, Horton contends, the Reformers did not capitulate to and extend the nominalism of the late medievals. On the contrary, the Reformers reflected their continuity with the Scripture and the Fathers in expressly setting the doctrine within the context of union with Christ and the law/gospel distinction. If anyone has been responsible for the perpetuation of nominalism, Horton counters, it is the Council of Trent and the post-Tridentine Roman Catholic theologians (1:332). Trent “represents the triumph of the nominalism represented by Ockham and Biel” by rendering the principle facere quod in se est (“do what you can”) an “all-controlling thesis” (1:350). Horton concludes his historical survey of justification by responding to the charge that the Reformation doctrine of justification bred antinomianism. While conceding that justification was not designed “to provide an ethic,” Horton insists that justification is the “basis” for sanctification (1:363–64). This state of affairs yields an “extrospective piety” with respect to God and human beings (1:373).

Volume Two addresses justification exegetically and theologically, particularly in response to developments within the last half-century of New Testament studies. Horton begins by perceptively observing that much of modern discussion regarding justification has been marred by false dichotomies—“historia salutis” or “ordo salutis”; “covenant” or “apocalyptic”; “forensic” or “participatory” (2:37–49). Horton’s discussion of justification then proceeds along four lines. The first attempts to set justification within its biblical context. The law/gospel distinction yields a bicovenantal framework, the covenant of creation (law) and the covenant of grace (gospel). Within redemptive history, the Abrahamic and Sinaitic covenants are two different covenants, corresponding to gospel and law, respectively. Sinai was a “temporary parenthesis” (2:81). For both Sinai and the Covenant of Creation, “personal fulfillment of the stipulations is the basis for the promised blessing” (2:76, emphasis original). The apostle Paul devotes his energies to correcting what Horton understands to be a confusion or conflation of the Abrahamic and Sinaitic covenants within the first-century church (2:117). The Judaizers taught that the blessings of the covenant of grace could be secured on the terms that God had set forth under the Sinaitic covenant (2:126). Paul counters by insisting that the blessing of justification could not be secured by “works of the law,” but through “faith.”

The second line of Horton’s analysis of justification concerns the “achievement of justification” (2:149). Horton argues that Paul shared a common Jewish conception of the human condition, namely, that people are in need of “personal salvation” (2:184). In particular, Paul understands humans to be under the divine wrath. To this plight corresponds justification, which is the “realization here and now of what happened objectively in Christ’s life, death, and resurrection” (2:195). Christ’s death is substitutionary, penal, and propitiatory, and Christ’s resurrection means that he is the “source of eschatological justification and life for all who will be united to him” (2:271).

Horton then turns to the “gift of righteousness” (2:281). Justification is both “declaratory” and “judicial” (2:293). Specifically, it is the “courtroom declaration that someone is deemed righteous before God … that the demands of the law have been fully met so that the person is reckoned to be righteous” (2:297, emphasis original). One must neither reduce justification to a mere declaration of membership, nor expand justification to include the grace of transformation (2:302, 299). Horton proceeds to argue that this declaration is based solely upon the “imputation of Christ’s meritorious righteousness” (2:325), laudably defending the doctrine of imputation from recent criticism. The verdict of justification is not based upon the good works of the justified person. Good works, rather, are “a consequence” of justification (2:394).

Finally, Horton addresses the way in which the grace of justification is to be received (2:395). “Faith alone” is the “instrumental cause” of justification (2:402, emphasis original). Reviewing the πίστις Χριστοῦ debate, Horton concludes that the “subjective view” (“the faithfulness of Christ”) “is to be faulted not in what it affirms but in what it rejects” (2:443). The objective genitive interpretation (“faith in Christ”), on the other hand, upholds the biblical doctrine of justification along with those legitimate insights of the subjective view. Horton concludes this section and the book by reflecting upon union with Christ. Union with Christ is not an “alternative paradigm” to justification, but its “proper habitat” (2:447). Union with Christ serves to integrate not only historia salutis and ordo salutis, but also justification and sanctification (2:460, 468). As such, it helps students of Scripture to avoid the distortions and false dichotomies that often attend reflection on justification.

Justification is a thorough and wide-ranging survey of the doctrine that commendably and self-consciously defends the formulations of justification that emerged from the Protestant Reformation. It helpfully and persuasively demonstrates not only that the Tridentine doctrine of justification is not a faithful expression of the theology of the patristic writers, but also that the Reformation stood in basic continuity with the church fathers. Horton also patiently shows that the Reformers did not construct the edifice of justification upon the foundation of late medieval nominalism, even as they recognized the deficiencies with Augustine’s particular formulation of the doctrine (1:222–23, cf. 311–32).

Horton, however, is not altogether clear in the way in which he relates justification to sanctification. Summarizing his reading of Calvin, Horton speaks of justification as the “foundation for sanctification,” its “basis,” or (quoting approvingly Herman Selderhuis) its “cause” without further elaboration (1:273, 470; cf. 2.471). Elsewhere in his discussion of Calvin, he speaks of a “logical dependence of sanctification on justification” (1:271). Presumably, Horton intends in each of these statements to communicate a strictly logical or psychological priority of justification to sanctification. If, as appears to be the case, the intent is to rule out an ontological priority or a relationship of efficient causality between the two graces, a clarifying statement to that effect would have helped the reader.

Horton commendably offers a defense of the traditional reading of Paul’s phrase “works of the law” as “something to be done in its entirety” (2:126; cf. 97–148). He constructively engages New Perspective readings of this phrase as denoting predominantly or merely “ethnic badges” (2:104). He does so, in part, by rightly questioning such proponents’ insistence that Paul and his Jewish contemporaries regarded first-century Judaism to be a “religion of grace” (2:107).

For Horton, Paul understands “works of Torah” to denote “an all-encompassing covenant that one indwells” (1:128). As such, Paul is said to target individuals who misguidedly sought the blessings of the age to come “on the terms of the Sinai Covenant,” not “according to the covenant of grace” (2:126). In reality, they, like other Jewish persons, were “transgressors” who found themselves in the “dangerous” position of being “in a covenant based on law” (2:137). In this respect, the Jew under Torah shares the plight of the gentile—each, in different respects, is under the covenant of works (2:136, 139). Therefore, “the only hope of Jews and gentiles alike is the Abrahamic/new covenant with Christ as Mediator” (2:136).

Horton’s proffered explanation of Paul’s phrase, “works of the law,” is internally consistent and mounts a stiff challenge to recent, revisionary interpretation. His developed exposition of the phrase, however, rests upon an understanding of the Mosaic covenant that is controverted even among conservative Reformed federal theologians. Many Reformed interpreters regard Paul’s opponents to have fundamentally distorted the Mosaic covenant, which was divinely promulgated as an evangelical administration of the covenant of grace. The “works of the law,” on this reading, reflect a failure to grasp the proper nature of the Mosaic covenant. As Horton’s argument stands, readers are not adequately apprised of this intramural difference. Were a reader to demur from Horton’s understanding of the Mosaic covenant, he might not know that there is an alternative way to account for the posture of Paul’s opponents towards Torah.

In summary, Horton’s Justification is a robust articulation of the doctrine that successfully manages to situate the doctrine historically, articulate its theological importance, reflect upon its biblical foundations, and to engage firmly but charitably its contemporary critics. It will be a valuable resource to students of the doctrine for years to come. To the reader who is willing to persevere to the end of this complex and challenging survey, a rich reward is in store.