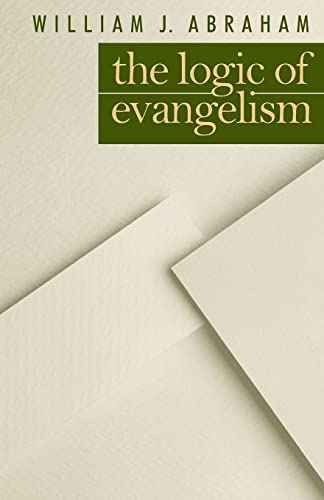 The Logic of Evangelism

James Denney once commented that if theologians were our evangelists and evangelists our theologians, we would have the ideal church. Although William Abraham is not an evangelist in the field, he is a professor of evangelism who teaches at Perkins School of Theology, Southern Methodist University. In addition to evangelism he also lectures in philosophy, which ensures a commitment to scholarly debate, a welcome feature of the title under review.

In his opening chapter Abraham laments the dearth of books which provide a firm theological foundation for the practice of evangelism. Whilst the cupboard shelves are not quite as bare as the author would have us believe—he fails to note James 1. Packer’s Evangelism and the Sovereignty of God, Robert Kolb’s Speaking the Gospel Today, and the two volumes edited by David Wells—it is true that there has been no comprehensive text on the topic of evangelism which endeavours to provide a theological framework to direct and critique the practice of evangelism in all its aspects. Such a framework Abraham endeavours to supply by utilizing the overarching motif of the kingdom of God. ‘We can best improve our thinking on evangelism by conceiving it as that set of intentional activities which is governed by the goal of initiating people into the kingdom of God for the first time’ (p. 95).

This is a serious theological text which, in this reviewer’s opinion, represents the most thoroughgoing treatment of evangelism from a theoretical perspective available to date. His purpose is twofold: first, to address the theological academy which has for too long relegated evangelism, church planting and mission to the sidelines by creating a false dichotomy of pure and applied theology; and second, to provide a penetrating critique of the many contemporary approaches to evangelism which lack both theological integrity and strategic effectiveness.

The task of evangelism stems from the message and dynamic of the gospel. Before engaging in evangelism, it is of crucial importance that the evangelist has an accurate understanding of the nature of the message s/he seeks to communicate. Good News is only possible because of a God who has chosen to reveal himself. ‘Whatever evangelism may be, it is at least intimately related to the gospel of the reign of God that was inaugurated in the life, death, and resurrection of Jesus of Nazareth. Any vision of evangelism that ignores the kingdom of God, or relates it to a position of secondary importance, or fails to wrestle thoroughly with its content is destined at the outset to fail’ (p. 17). Such is the author’s basic thesis which helpfully broadens the topic from the ultra-individualistic approaches which are so prevalent in evangelistic literature, and which heightens awareness of the divine dynamic at work without which there would be no present manifestation of the kingdom nor the possibility for its enhancement. Now, as with NT believers, evangelism has to be ‘rooted in a corporate experience of the rule of God that provided not only the psychological strength and support that was clearly needed in a hostile environment but that also signified the active presence of God in their midst’ (p. 38).

In his consideration of the place of proclamation, Abraham argues against a narrowing of the message to conform to the sharp distinction between preaching and teaching argued by C.H. Dodd; a restricting of the evangelistic task to those especially gifted and recognized as evangelists by the church; or a blinkered focusing of attention on the threshold decision, to the exclusion of the wider, ongoing implications of discipleship. Rather, the author regards the whole congregation as an evangelizing community embarking on the Great Commission focus of going into all the world to make disciples. Evangelistic strategies which are based outside of the structures of the local church—for example, television, city-wide crusades and lone-ranger approaches—all suffer severe limitations. Methods which have become commonplace in the twentieth century would appear strange to the eyes of NT believers for whom it was unthinkable to have evangelism without community and community without evangelism (p. 57).

Abraham agrees with the Church Growth school of thought to the extent that evangelism is seen as a vital activity which must be integral to the life of the local congregation; that the goal is not the registering of decisions but the growing of disciples, who are being nurtured in the community of faith; and that insights derived from the social sciences can legitimately be applied to the communication task. On the other hand, he expresses concern regarding Church Growth’s fiercely pragmatic spirit, and he scolds its advocates for neglecting to do their theological homework. He applauds Charles van Engen for his significant work in relating Church Growth to ecclesiology, but awaits a more thorough theological exposition of Church Growth in relation to missiology and the eschatological motif of the kingdom. John Wimber is commended for his efforts in this direction, but Abraham does not regard Wimber as a true representative of the Church Growth school; rather, ‘his work represents a profound challenge to the fundamental orientation of McGavran and his disciples’ (p. 90).

Abraham’s focus on the kingdom paradigm in relation to the practice of evangelism leads him to place a strong emphasis on initiation into a local body of believers as the locus of the rule of the King. Drawing on his Methodist heritage, the author holds forth the strategy of Wesley in eighteenth-century England, in which awakened sinners were brought into the class meetings in order to learn the implications of following Jesus Christ. Translating this concept to the contemporary setting, initiation must include the following elements: coming to experience in one’s inner life that kind of assurance which only the Holy Spirit can give; the reception and development of particular gifts and capacities; learning to give of oneself in the work of the kingdom; appropriation of certain basic spiritual disciplines that are absolutely essential for the exercise and sustenance of responsible obedience to the joys of the kingdom (p. 103).

Baptism needs to be seen as a radical break from the social context, signifying a new identity both in terms of personal regeneration and kingdom incorporation. Seen in this light, baptism can neither be set aside nor treated lightly. The reality of conversion and the imagery of new birth have to be liberated from subjectivism to be seen in this broader context. However, this reviewer would take issue with the statement that ‘the imagery of new birth is very marginal in the New Testament’ (p. 120), in the light of the exploration of this concept provided by Peter Toon in Born Again—a Biblical and Theological Study of Regeneration, and he would like further clarification of the relationship between ‘being’ and ‘doing’ in relation to conversion (p. 125); if ‘being’ does not precede ‘doing’, as José Miguez Bonino argues, are they to be seen as two sides of the same coin?

The last two chapters deal with the challenge presented by secularism and religious pluralism in the task of evangelization. In response to the former, Abraham rejects any attempt to accommodate the gospel to the secular mindset by downplaying the unique salvation events which find their climax in Christ’s crucifixion, resurrection and ascension. The great themes of the gospel are neither redundant nor optional (p. 197). On the other hand, ‘the mature evangelist needs to be deeply informed by the convictions and sensibilities of those he or she is seeking to address in the name of the gospel’ (p. 203). In regard to the pressure from pluralism to relativize the gospel, Abraham insists on the finality of God’s revelation in Jesus Christ, arguing that the ministry of the Cosmic Christ is wider than his embodiment in Jesus of Nazareth. From this standpoint he believes that ‘it is reasonable to infer that people outside the biblical tradition may also be saved and acquitted’ (p. 220).

By regarding other religions as preparations for the gospel he overlooks the fact that other religions often give very different answers to different sets of questions, and that, as Karl Barth has argued, there is the presence of the demonic, which makes all human religion an obstacle to hearing the authentic voice of Christ. One must seriously question the notion that other religions lead to the Christ revealed in the NT. While we may agree with other evangelical scholars (e.g. John Stott and Norman Anderson) that salvation may be available to those who have never had a valid opportunity of hearing the gospel and have thrown themselves on the mercy of God, we must ask whether the non-Christian religion in which they were nurtured has led them to this position? This is not to deny the possibility of dialogue, nor the recognition of genuine spiritual insight and moral rectitude in other religions.