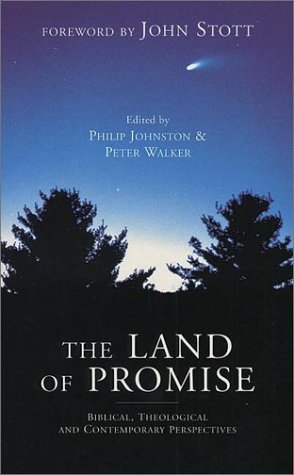 THE LAND OF PROMISE

Most of the papers that are published in The Land of Promise were read at a conference held by the Tyndale Fellowship Biblical Theology Study Group in 1999 on the theology of ‘the Land’. This is taken primarily in the sense of Palestine/Israel. There are six main sections. The first comprises two essays on ‘the Land in Israel’s Story’ (Genesis-Kings). Paul Williamson’s essay concentrates on the promise of the land to Abraham (Gen. 12 etc.) and its partial fulfilment in the ensuing history of Israel. Desmond Alexander’s contribution complements this by focussing on some of the theological themes that are associated with the land. The Prophets are covered by Deryck Sheriffs’ two essays. The first of them is a series of exegetical ‘snapshots’, while the second considers some of the hermeneutical issues involved in a Christian reading of the Prophets. The NT documents are ably covered in the third section by Peter Walker, who in his first essay looks at the apostolic witnesses, and, in his second at the question of the extent to which the apostolic view was derived from Jesus. He ends with some helpful pointers towards a biblical theology of the land.

The second half of the book looks at the issues from different perspectives and there are interesting articles in the fourth section on how the OT promises are fulfilled in the NT (O. Palmer Robinson); dispensational approaches to the land (Stephen Sizer); and ‘Ten Questions for a Theology of the Land’ (Colin Chapman). The fifth section is a pair of articles which look at the question of the land from Jewish Christian and Palestinian Christian viewpoints (Baruch Maoz and Naim Ateek respectively). The collection closes with an essay on Christian stewardship of the land (this time meant generally) by Carl Amerding and a personal response to the papers by the secretary of the group, Gordon Thomas.

Two important issues are raised by this book. First, there is an undercurrent of criticism of Dispensationalism, which breaks the surface in Sizer’s essay. Dispensationalism, ‘one of the most influential theological systems within the universal church today’ (142), keeps Israel and the church separate, and claims that the scriptural prophecies which refer to Israel (e.g. the return of Jews to the land of Israel/Palestine) must be ‘literally’ fulfilled in and by Israel (both land and people). If nothing else, Sizer’s essay should make the reader deeply uneasy about the concept of ‘literalness’. (The book is worth reading for this reason alone.) Second, we are confronted by one of the most important questions that Christian readers of the OT must face: what difference does the life, death and resurrection of God’s Messiah make to the way that we read the OT? One of the most telling criticisms against Dispensationalism is that, in that scheme, Jesus seems to have made little, if any, difference to the way that prophecy is read. Dispensationalists ‘seem to read the OT with the spectacles worn by the disciples before the resurrection and their encounters with the risen Christ’ (182). This is eerily analogous to the way that secular biblical studies teaches us to read the ‘Hebrew Bible’; Jesus makes no difference.

This book is worth reading for three reasons: it presents much of the biblical material relevant to ‘the land’ in a clear and helpful way; it offers a clear presentation of Dispensationalism to those that are unfamiliar with it and a challenging critique for those who are; finally, it raises some of the key hermeneutical issues that must be faced when interpretating the OT.