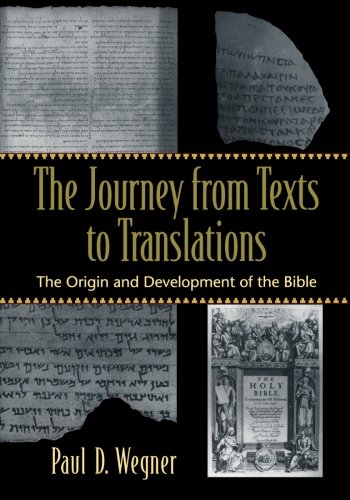 THE JOURNEY FROM TEXTS TO TRANSLATIONS: THE ORIGIN AND DEVELOPMENT OF THE BIBLE

This book has high ambitions, only partly conveyed by title and subtitle. According to the preface its purpose is ‘to provide a general survey of how the Bible we use came to be in its present form’ suitable for ‘undergraduate student or layperson’. It actually attempts even more by giving a description of, and apology for, the Bible, with an unashamedly conservative approach throughout. It is a large, attractively produced book, with some 430 double-column pages of text and notes, and numerous illustrations, tables and boxed summaries. Does it meet its aim?

Though formally in five parts, it has three roughly equal sections. The first section (parts 1 and 2) discusses content and canon. A brief assertion of the Bible as the Word of God precedes a basic description in Part 1 of OT and NT, in their various sections and traditions (Hebrew, LXX, Vulgate etc.). Part 2 discusses languages and writing, then the books within and outside OT and NT canons. Much of Part 1 is first level survey, and certainly useful at that level. But some material seems out of place here, for instance historical background of the NT, the synoptic problem, unity of the covenants. The sections on canon includes much good material, but sometimes matters of faith are asserted as fact, for instance that the law was authoritative ‘almost immediately’ (101, quoting Exod. 24:3–8). Also the section on NT evidence for the OT canon ignores Zechariah’s problematic lineage (Matt. 23:35) and quotes Jesus’ single tripartite description of the OT (Luke 24:44) while ignoring the many bipartite ones (‘law and prophets’, 109).

The middle section covers transmission and textual criticism of each testament in Part 3, and early versions and first printed Greek NTs (somewhat misplaced) in Part 4. These are good, workmanlike introductions, with clear descriptions and probably the right amount of detail at this level—except for ‘Dead Sea Scrolls’, which receives much less space than some later versions (Ethiopic, Arabic) but merits far more. Also, ‘Recent Hebrew Bible’ should at least have noted the revised BHS (BH Quinta) and the Hebrew University Bible.

The final section (Part 5) discusses English translations in four chapters (pre-1611; 1611 and revisions, pre-1950, post-1950) with a short conclusion on translation issues. Over thirty different translations are analysed in detail, usually covering history, features, reception and evaluation, and giving the Lord’s prayer as an example. Some twentieth century versions are not of only historic interest, and treatment could have been briefer (e.g. Weymouth, Moffat, Confraternity, Phillips, Berkeley). Generally the descriptions are good and comments measured and helpful. However, it is hardly appropriate to impose our interpretation of italicisation onto the AV (310), to repeat without comment F.F. Bruce’s fulsome evaluation of the RSV written in the pre-NIV era (324), or to critique the NRSV for one edition’s size of footnote letters (333). There is a rather brief discussion of ‘The King James Debate’, but sadly no acknowledgement, let alone discussion, of the much more important inclusive language debate. Also the crucial issue of translating idioms is simply mentioned (401), without showing how it is resolved in important current versions.

The numerous illustrations and tables are generally well-chosen and helpful. However, table summaries can be deceptive, for instance Table 3.5 (45) suggests a single LXX order of OT books, whereas the later text (47) and appendix (50) rightly notes the variety. The format leads to some repetition, for instance critique of the AV (314f., 339f.). More importantly, occasional mistakes betray insufficient expertise, for instance Hebrew script as Assyrian (82), a single Aramaic word (in Gen. 31:47) described as a passage (86). In fact, the book draws repeatedly on others: the names of Bruce, Beckwith, J.P. Lewis and Kubo-Sprecht abound. Unfortunately it was not checked well enough, not even in this ‘corrected edition’; for instance, about half the errors noted in the WTJ review (62.2, 2002, 306–309) were not picked up. The publishers should have waited to read it!

So does it succeed? Yes, largely, for conservative first level students. But it needs to be complemented with other works, both to engage more directly with critical scholarship and to correct occasional mistakes.