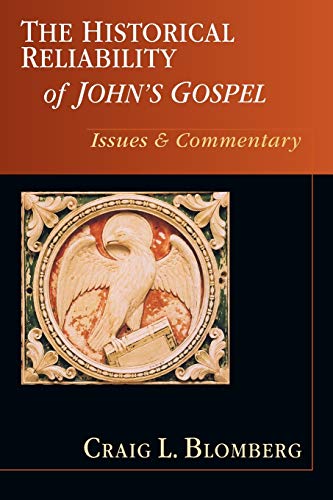 THE HISTORICAL RELIABILITY OF JOHN’S GOSPEL

Even in post-modern times, the historical reliability of the Bible is arguably a highly relevant issue for evangelicals. Because the reliability of no other NT book has been so disputed as that of John’s Gospel, this book-length study by a leading evangelical would seem to be very welcome. Blomberg himself claims that although many recent commentaries and articles defend ‘a substantial amount of historicity in the Fourth Gospel’, the last monograph on the issue (William Sanday) dates from 1872 (21–22)! He wants to show that the search for the historical Jesus cannot ignore John’s Gospel any longer. So this is a timely book, and yet my enthusiasm for it is qualified. It would seem that some of its strengths are at the same time weaknesses.

In Blomberg’s own words, his book is ‘a study that discusses many of the standard introductory and background considerations, but which goes on to examine in some detail every passage in John, in order, with a view to assessing historicity’ (22). A lengthy bibliography and very reliable indexes complete the volume. Most references are printed in the text, whereas footnotes contain extra information.

In the introductory essay Blomberg argues that almost the entire Gospel comes from the hand of John, the son of Zebedee, assuming only limited editorial activity (38, 283). As to John’s relationship with the Synoptics: he follows Bauckham in arguing that John can be read independently yet ‘is trying to allude to events in Mark for those who are familiar with them’ (48). In many places he suggests that John omits details of events because his readers already know them. Yet at the same time Blomberg argues that literary dependence is unlikely.

The author is aware of the fact that everything in the Gospel, including the very words of Jesus, bears the mark of John’s peculiar style, but he argues that underneath this there is historical veracity nonetheless: ‘I shall not infer inauthenticity merely from the presence of demonstrably Johannine style or thought’ (65). A conclusion which characterises this book is the following: ‘John has clearly written things up in his own idiom. But no reasons have emerged for doubting that the essence of the chapter reflects the deeds and words of the historical Jesus and those around him’ (157). Even chapters 14–17 are accepted as basically authentic; only with reference to John 12:44–50 we read: ‘If there is one cluster of sayings attributed to Jesus in the entire Fourth Gospel that could plausibly be attributed more to John than to Jesus, it would be verses 44–50’ (185).

Blomberg basically works with three criteria. The first one is N.T. Wright’s double similarity and dissimilarity criterion, the second one attestation in another source (viz. the Synoptics; on this see below), and the third a positive conclusion by a previous scholar, preferably not an Evangelical. All sayings which include the words ‘amen amen’ and ‘Son of man’ are by definition seen as very probably authentic.

So what are the strengths of the book?

As to weaknesses, I note the following:

Some things remain unclear, the most pressing of which I find to be John’s relation to the Synoptics. Blomberg holds that John ‘was familiar with many if not all of the contents of the Gospels that preceded him even if he did not borrow from them in a strict, literary fashion’ (49), and John throughout uses his very own style, even when rendering the very words of Jesus. Why then both make the case for literary independence of most passages and at the same time admit that it is possible that John has reworked the Synoptics (249)?

So? My heart probably was not warmed because the book’s conclusions are predictable. Yet they are correct! All those researching the historical Jesus should from now on deal with four rather than three gospels. This is no groundbreaking study, but a good compendium for students that deserves a wide readership. No essay in this field can be written without reference to it. The book will be enormously helpful for. those who want to be helped and convinced, although sceptics are not likely to be converted.