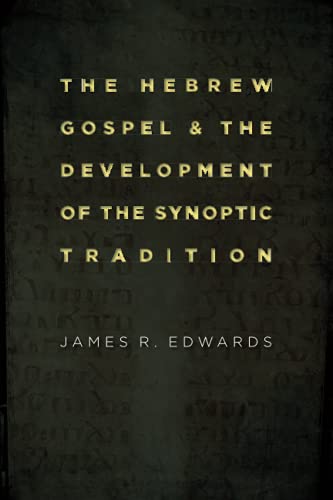 The Hebrew Gospel and the Development of the Synoptic Tradition

The transmission from the historical life of Jesus to the textuality of Gospel witness has been something of a holy grail within NT scholarship. Though each Gospel demonstrates peculiarities of interests, the Synoptics betray similarities that cause one to suspect a source (or sources) behind these commonalities. Varying theories stemming from the two-source hypothesis to Griesbach’s two-Gospel hypothesis have all been proposed to solve the riddle, but there are plenty who suspect the current consensus. What is more, with the rise of studies in oral cultures and the appropriation of various memory models, transmission theories within Gospel studies have seen recent revaluations.

Enmeshed within these debates is the question of Jesus’ mother tongue. Some suggest Greek (e.g., R. O. P. Taylor), others Aramaic (e.g., Fitzmyer), and still others Hebrew (e.g., Birkeland). Owing to the deportation and the influence of the Achaemenid era (c. 550–330 b.c.), there was a natural move from Hebrew to Aramaic within Palestine. What is more, the Hellenization programs of the Seleucid kings of Syria in the third and second centuries and the two Jewish wars in the first and second centuries a.d. together pressed spoken Aramaic to the margins in favor of Greek. Whatever the spoken language of the Galilean Jesus might have been, however, it must not be confused with the problem of the original language of the primitive forms of say, Matthew’s Gospel or the sources of Luke’s Semitisms. The Qumran community, for example, though writing in a time when both Hebrew and Aramaic were receding in favor of Greek, committed the majority of their texts to neoclassical Hebrew Script. In other words, Hebrew was alive and well in some pockets of first-century Palestine.

Enter James R. Edwards and his daring take on the complexities surrounding the Synoptic riddle. In his recent publication The Hebrew Gospel and the Development of the Synoptic Tradition, he argues, “the high concentration of Semitisms in Special Luke—those portions of Luke that are not shared in common with Matthew and/or Mark—can be accounted for on the assumption that they derive from the original Hebrew Gospel” (p. xxi). Several basic planks support this thesis. First, there is a near 400% increase in Semitisms in Special Luke over Semitisms that occur in Luke that also occur in Matthew/Mark. Because Luke was a Gentile, this increase, so the argument goes, suggests a Semitic source. Second, there are eighty-some quotations from twenty different patristic writers—ranging from Ignatius of Antioch to Jerome—of the Hebrew Gospel, which demonstrate a higher correspondence with Special Luke. According to these patristic sources, the Hebrew Gospel was the work of the apostle Matthew, an eyewitness source perhaps referred to in Luke’s prologue. What is more, reference to the Hebrew Gospel in varying sources such as the scholia in Sinaiticus and the Islamic Hadith suggest a pass on the test of multiple attestation. (Edwards counts at least seventy-five different attestations.)

The first three chapters of the book document and exegete the known references to the Hebrew Gospel through the first nine centuries of the Christian church. The fourth chapter deals with the nature of Semitisms in Luke’s Gospel. Chapter five tackles the contested question of Semitisms or Septuagintisms. The sixth chapter is something of a social history regarding the neglect of the Hebrew Gospel with respect to twentieth-century scholarship. The seventh chapter attempts to dispense with Q’s “continued viability as a hypothesis” (p. xxii). In this chapter, Edwards is careful not to dispense with Markan priority, however, simply the second prong of the two-source hypothesis. Some Q proponents will question his lack of discussion regarding the Lost Sheep parable (Luke 15:4–7) or of Mark/Q overlapping material. The final chapter analyzes the relation between the canonical Greek Matthew and the Hebrew Gospel. A helpful epilogue concludes with twenty-three conclusions (pp. 259–62), and three helpful appendixes round out the volume. On pages xxiii–xxxiv, he situates his project within a brief telling of the history of interpretation regarding the “quest for the Hebrew Gospel.”

Edwards offers no reconstruction of the Hebrew Gospel but instead is interested in the affirmation of it as a narrative “that included material extending from the baptism of Jesus through the resurrection” (p. xxxiv). As such, the second source informed the Synoptic tradition in lieu of Q. In one sense, of course, this is deeply problematic: there is no extant copy of the Hebrew Gospel. Moreover, many will question his methodological assumptions. For example, if, as he maintains, Luke added Semitisms to his Markan source, why not allow the possibility of him creating Semitisms in the material peculiar to his own Gospel?

In this sense, it is difficult to evaluate the work of Edwards. His demonstrable talents in diverse disciplines such as traditional Gospel studies, patristics, nineteenth- and twentieth-century German scholarship, and, of course, the use of Hebrew within antiquity are impressive. One surely walks away from his work impressed, but, at best, with a shrug of the shoulders and a pronounced “perhaps.” Edwards’s volume is surely not the last word to be spoken on the topic of the Hebrew Gospel, but anything said from here forth—either for, against, or indifferent—will have to reckon with it. It is must reading for those engaged in Synoptic studies.