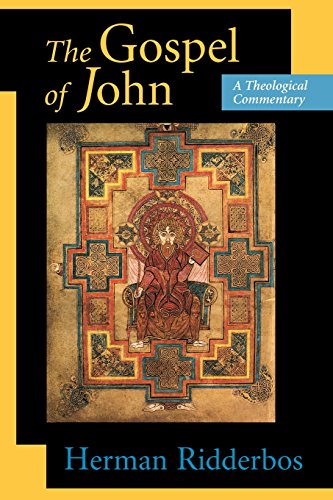 The Gospel of John: A Theological Commentary

Herman Ridderbos’ commentary on the Gospel of John demonstrates that mature theological reflection, conversant with the theological heritage of the church, and insightful exegesis, attentive to the biblical text, nurture each other in rich and fruitful ways. The subtitle of Ridderbos’ comprehensive work on John—‘a theological commentary’—aptly captures its dual purpose. It is a commentary, and thus aims to elucidate and explain the actual text before it, in this case the Gospel of John as we have it in its present canonical form. But as a theological commentary, the work offers far more than a description of the theology of the Fourth Gospel, although it does that as well. This commentary actually engages in theological reflection with and on the text. Although Ridderbos pursues his goal rather differently, his commentary is a major theological work, such as the classic older commentaries of Hoskyns and Bultmann offered in other guises.

Ridderbos dispenses with some of the traditional trappings of the commentary genre. He does not discuss in any detail vexing questions such as authorship, audience, date, and so on, nor does he engage in speculative theorizing on the possible origins of the Gospel. It is clear that Ridderbos is conversant with the issues and questions. But the task of the exegete, as he sees it. is to engage the text ‘as the Christian Church adopted it’ (xiii). Nevertheless, he does open the book with what he terms a theological introductionto the Gospel, and here one will immediately discover the deft hand of a sure exegete with critical, historical, and theological sensitivities all brought to bear on the discussion.

The proof of any commentary is in using it. Does the commentary helpfully open up difficult passages? Does it force us to think carefully about the text? Does it ultimately help the reader to engage the very subject matter of the Gospel itself? Time and time again, as one delves into Ridderbos’ commentary, the reader will find these questions answered affirmatively. In spite of the many commentaries on the Gospel. Ridderbos is able to offer fresh insight into it. He is no slave to recent fashion in interpretation of John, although clearly willing to avail himself of insights into the text which historical and critical methods can afford.

So, for example, as one reads his discussion of the prologue (Jn 1:1–18). one finds that Ridderbos can ably discuss such critical questions as the sources and historical background which may lie behind the prologue. But this discussion is added almost as an appendix, where Ridderbos treats and discusses the views of major commentators on this question. In the commentary itself, Ridderbos lays out his reading of the text. He typically does not address difficult texts by laying out all the possible options, and showing the arguments for and against each one. Rather, he allows his reading of the text, in dialogue with other views, to remain the main feature of the commentary, relegating more technical discussions to virtual excursuses and footnotes. Thus, for example, a rather detailed and lengthy discussion of ‘The History of Religions Approach’ to the prologue and of ‘The Logos and “Wisdom” ’ are included, but in smaller print, and in between the actual exposition of the text. The material is there: but Ridderbos does not burden his exegesis with too much focus on these technical matters. In reading the commentary one often has the distinct impression of reading theology more than exegesis. Ridderbos offers theological reflection on and elucidation of texts for which the actual preliminary exegetical study often lies buried beneath the surface of the commentary. Precisely here the commentary is refreshing and useful. In grappling with Ridderbos’ theological implications and conclusions one will be forced to rethink previous exegetical decisions.

Ridderbos’ work is not for the faint of heart. He expects a lot from the reader and assumes quite a lot about the readers’ knowledge of critical issues in interpreting the Gospel, of theological matters, and Greek grammar and syntax. Because he does not address introductory issues (such as authorship, date, and so on) in any systematic fashion, the student will have to ferret these out from the commentary, if they are matters of primary concern. Not likely to be a beginning students’ first choice, the commentary will be most useful to those who have a good working knowledge of the Gospel and the issues involved in its interpretation, and want to probe once more the theological depths of the Fourth Gospel with a sure guide. Here Ridderbos will not disappoint.