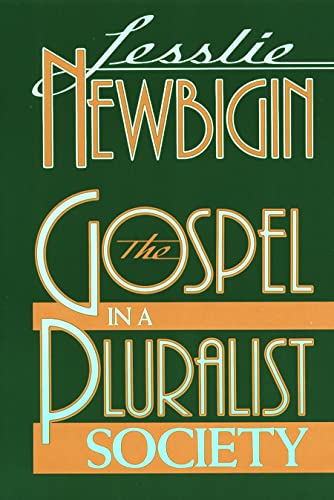 The Gospel in a Pluralist Society

These two books demonstrate the increasing maturity of contemporary reflection upon mission and evangelism, and in particular the benefits of a thorough engagement between ecumenical and evangelical theology.

Lesslie Newbigin has had an extraordinary life by any standards, as readers of his recent autobiography, Unfinished Agenda, will appreciate. His latest book complements the autobiography by providing, in rare fashion, the distillation of the wisdom of a lifetime. It is written for an informed but general readership, and avoids technical or scholarly digressions. Yet it sustains an argument with considerable intellectual power, and ranges over a wide theological domain.

The early chapters are chiefly concerned with the distinction between fact and opinion in post-Enlightenment thought, and the insidious tendency to place religious belief firmly in the latter category. Philosophically, Newbigin relies heavily upon the secular prophet, Michael Polanyi, and he demonstrates the relevance of Polanyi’s rich insights for theology. There is also a certain debt to Alastair Maclntyre. But what makes Newbigin so interesting is the deep correlation which he identifies between these modern social philosophers and streams of biblical thought.

The modern confinement of faith to the realm of mere opinion has made it even harder to anchor Christian belief in the historical events retold in the Bible. For Newbigin this is a disaster which must be reversed, and the central chapters of the book are concerned with the relation between God and history, which he sees focused in the incarnation: ‘the whole of Christian teaching would fall to the ground if it were the case that the life, death and resurrection of Jesus were not events in real history’ (p. 66). Yet this prompts the question, which presses with ever increasing urgency upon the contemporary church, of just why the historical anchorage of Christianity is so important. Newbigin’s answer is rooted in the historical givenness of human reality, and the fact that God always deals with people in their historical actuality, and especially in the network of communal relations in which human life is found. Rightly, he wants to erect a fundamental barrier to any move to construe the relation of God as primarily, or exclusively, with the individual soul.

What I missed at this point was an adequate—or, indeed, any—discussion of the atonement, and without this I found Newbigin’s assertions about the importance of historical event in the story of Christ less than fully convincing, and needing further development. This central section contains an interesting treatment of election, somewhat along the lines advocated by Karl Barth, which would also have been strengthened by a consideration of the atonement. Perhaps Newbigin is a little over-sensitive to any focus on the salvation of the individual, and this leads to a certain underdevelopment of the whole doctrine of salvation. Partly as a consequence, one is left wondering just how his theology relates to the various branches of ‘postmodern’ or narrative theology.

The final chapters contain a creative discussion of the relation of the gospel to culture, centred around a trenchant plea that the church should attempt to reclaim a role in the determination of ‘public truth’ as a key part of its evangelistic mission. It would have been helpful to hear how this role might vary in different situations, for example, where the church’s actual or nominal membership is either a majority or minority of the population. A fuller discussion of these issues would have helped secure Newbigin against the oft-repeated, and probably unfair, charge that he is influenced by a desire to return to a past Christendom.

Proclaiming Christ in Christ’s Way is a collection of fourteen essays in honour of the German churchman Walter Arnold, who helped to arrange the Stuttgart Consultation on Evangelism in 1987. Although varied, and somewhat uneven in quality, these essays share Newbigin’s concern for evangelism which addresses people in their historical context and total situation.

Issues of justice and peace are raised as aspects—or concomitants?—of evangelism, but there is a full recognition that we are not so much building the kingdom as experiencing it in a provisional and proleptic form. But there is much work still to be done here, especially in the area of political and economic analysis, where the models employed often seem superficial. As a result, there is a rather idealistic feel to some of the statements which are advanced.

Several writers concentrate upon the question of the adaptation of missionary strategy in particular cultural situations, but none is more effective than David Gitari’s reflection upon the experiences of the church among the nomadic peoples of Northern Kenya. Vinay Samuel contributes a perceptive essay on the underlying theological questions. Both insist that a process akin to the incarnation of the gospel in a culture is required, when those Christians in the context itself will be led to discern how aspects of the culture are to varying degrees challenged, tolerated, endorsed and transformed.

There is an unusual and suggestive essay by Swedish missiologist Per Harling on communication in music. He makes the somewhat startling claim that during the 1980s the time used for music-listening was twelve times the time in earlier decades, and that the presence of commercial music throughout life in the post-industrial society is enormously potent. Today almost no popular record is produced without having the lyrics printed on the cover, and to many young people this ‘cover poetry’ is the only kind of life-interpreting text they get during their adolescence. How should the church respond? Per Harling is content to pose the question, and to sketch one dimension of the answer in modern Swedish hymnody.

Both these books are to be warmly recommended as we move into what will be regarded in most denominations as a special decade of evangelism.