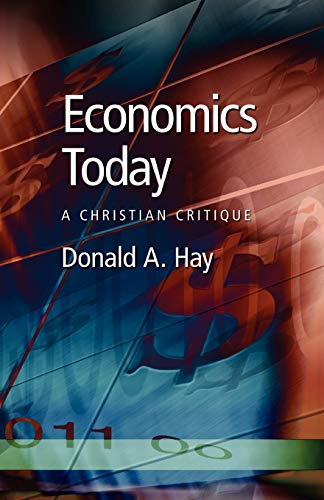 Written by Donald A. Hay Reviewed By Ian Smith
Ethics and Pastoralia

Although this book is written by an academic economist, and its primary target audience is that of the university economics student, it is also intended to be intelligible and significant for those interested in social ethics. The main contribution is the application of the method of social principles to economic problems. The method consists in an extensive examination of the biblical material relevant to social and economic life in order to derive principles, valid across time and space, to govern Christian thinking on contemporary economic issues. This thematic position occupies the middle ground between two popular alternatives: the rather loose appeal to biblical tradition or, its opposite, the direct application of scriptural detail.

Hay’s central organizing concept, discussed in the opening two chapters, is that of responsible stewardship. This notion underlies the set of principles he outlines. These may be briefly enumerated under three headings: creation and man’s dominion; man and his work; the distribution of goods. Man is accountable for his use of the created order, his personal resources and talents. Thus, responsible dominion precludes waste or abuse of what God has entrusted to women and men. The chief means of exercising stewardship is through productive work. Man has a right and an obligation, therefore, to work, understood broadly as a co-operative social activity. Further, everyone has a right to the basic needs of food, clothing and shelter. No one should consume more than is necessary, and the rich are under obligation to provide for the poor who are unable to sustain themselves by work.

The author stresses that though these principles are ideals, they are applicable beyond the covenant community to secular society. However, he is keenly aware that, in a fallen world, pragmatic concessions to first best standards are inevitable. Hay also adopts a critical attitude towards his principles, emphasizing their essential provisionality. He acknowledges scope for legitimate disagreement even at this relatively abstract level. Hay rejects, for example, the argument of Brian Griffiths that the biblical material requires private property and a market economy.

Chapter 3 analyses the methodological and philosophical basis of modern economics. Not surprisingly, he finds the utilitarian roots of economic theory inconsistent with a Christian view of man in community. A Christian alternative has radical implications for public policy recommendations and the agenda for economic research. The emphasis is shifted from consequentialist concerns with efficiency, growth and equality to actions and institutions that promote stewardship, useful work, protection for the disadvantaged and so on.

The final chapters seek to apply his derivative social principles to five general issues: the relative merits of market and planned economies, problems of macroeconomic policy, relations between the North and South, and the limits to economic growth. Policy prescription is largely absent due to space limitations. He notes that the prescriptive task is problematic due to intrinsic ethical complexities, but urges the need for such difficult judgments to be attended to (with cheerful tolerance).

As a contribution to the on-going evangelical social ethics debate, this book is to be welcomed. Hay’s informed economic analysis takes the reader beyond the naïve platitudes of popular discussion.