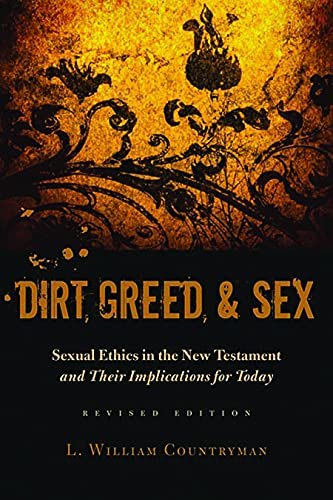 Dirt, Greed and Sex: Sexual Ethics in the New Testament and their Implications for Today

This is a fascinating and stimulating book, if also, in the final analysis, an unsatisfactory one. At first sight the title looks luridly sensationalist, a desperate attempt by author and publisher to get another book about sexual ethics noticed. But it is justified by the fact that Countryman sees purity and property as the two categories for understanding what the Bible says about the ethics. ‘Dirt’ represents how sexual practices regarded as impure are seen; ‘greed’ denotes a failure to respect the sexual property of others.

Clearly these are important concepts for understanding the biblical material in its cultural context, and Countryman analyses many scriptural passages in a fresh and interesting way. He accepts Mary Douglas’ thesis that the rationale behind the Israelite purity system is the ideal of what constitutes a whole, complete specimen of its kind. There should therefore be no mixing of kinds. Nor may one person combine mutually exclusive functions: when a man dresses as a woman or acts as a homosexual partner, he is performing a female role which is unacceptable. In intertestamental times Judaism splintered into different groups which adhered to purity laws with varying degrees of strictness, but the concept was still very much alive in NT times.

Jesus radically questions this way of understanding. In Mark 7 he declares all foods clean, and he subordinates physical purity to another kind of purity, that of intention. Countryman finds it striking how Jesus describes entry into the kingdom of God in terms of something unclean, i.e. being born (again). The emphases of the evangelists differ, but they are united in their view that ‘for Christians, physical purity is no longer a determinative element in their relationship with God’ (p. 94). Paul’s thinking is consistent with this. He regarded humility and peaceableness within the community as leading Christian virtues, not sexual purity.

What then does Countryman make of Romans 1:24–27? He thinks that Paul treated homosexual behaviour as an integral if unpleasingly dirty aspect of Gentile culture, but not actually as sinful. Paul uses it as an illustration in order to captivate the sympathies of his Jewish readers, confident that he would not alienate Gentile readers who already knew where he stood on the purity issue (i.e. that he defended their right to remain unclean in a physical sense). I found this one of the most unconvincing pieces of exegesis in the book. It fails to reckon with the strength of language used by Paul about such behaviour; it is also blind to the possibility of some underlying concept of moral order which lies behind his use of the words ‘natural/unnatural’, and which may well transcend culturally relative purity regulations.

Countryman then reexamines biblical material in terms of the property motif. This makes sense of OT condemnations of adultery, which was regarded as an offence against another woman’s husband (stealing his property) rather than disloyalty to one’s own partner. Paul’s exhortation to the Thessalonians to control their lusts so that no one take advantage of his brother (1 Thes. 4:6) is in keeping with such a view. Again Jesus radically changes things. His assertion that if either husband or wife divorce and remarry they commit adultery against their original partner represents a decisive levelling of status. Jesus gives both husband and wife a permanent and indissoluble claim upon the other. Surprisingly, Countryman fails to detect a similar mutuality in Ephesians 5:22–33, having eyes only for the subordation theme in that passage. But he thinks that Paul’s conservatism with regard to the relations of the sexes should be understood primarily as an adaptation to what he thought was the end time; in ethical theory Paul was not materially less radical than Jesus. Restraints on sexual behaviour are no longer motivated fundamentally by purity or property considerations but by love and concern for the peace of the community.

In chapter 12 Countryman attempts to apply his findings to the modern world. He sketches the outline of a sexual ethic intended to be ‘both intelligible and practical and also coherent with the gospel of grace’ (p. 240). This turns out to be thoroughly liberal and permissive. Bestiality should occasion little concern. Insistence on celibacy for homosexuals, where they have not been given such a gift, is contrary to the NT witness. Erotic literature and art has an important place in sexual education. Adultery is redefined in terms of the use of a sexual relationship for one’s own satisfaction with minimal regard for the partner (an important insight, to be sure). The door is tamely opened to abortion on the grounds that ‘The child who has actually passed through the birth channel seems qualitatively different from the one still in the womb’ (p. 255) and ‘No one should be obligated to bear children’ (p. 256). And what begins as a strong defence of marriage as a one-flesh union turns into a ready willingness to dissolve many marriages as not real marriages and to sanction trial periods of living together before recognizing many relationships as marriages. The principles which Countryman derives from his biblical survey need not necessarily lead to conclusions which echo current fashions so uncritically. Yet there remains a weakness at the heart of the exegesis which I have identified earlier: the lack of an underlying concept of moral order. It is linked to Countryman’s almost total neglect of Genesis 1–3. Sexual ethics needs to be grounded in an adequate theology of creation.