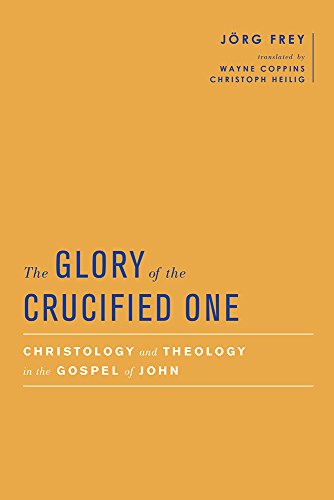 The Glory of the Crucified One: Christology and Theology in the Gospel of John

Jörg Frey is well-known for his research on John over the last twenty-five years and is likely to be more widely known to Anglophone New Testament students as the editor of the WUNT series published by Mohr Siebeck. In 2013, he released a volume of essays entitled Die Herrlichkeit des Gekreuzigten (ed. Juliane Schlegel, WUNT 307 [Tübingen: Mohr Siebeck]). The Glory of the Crucified One translates seven essays that appeared in the 2013 collection and is a valuable addition to the Baylor-Mohr Siebeck Studies in Early Christianity series. The book is not a straightforward translation of the entire German tome. Three of the 2013 chapters already appeared in English and would be redundant in a translated volume. Eight additional chapters were excluded to make room for four others from Frey’s most recent publications, along with a hefty introduction by Frey that is published here for the first time.

Frey’s introduction contains an autobiographical account of how his studies of the Johannine writings began and notes three of his particular research interests: the history of research, John’s context and background, and John’s theological claims. The eleven other chapters are organized into five parts. Part 1 consists of an essay that maps how Frey sees recent Johannine scholarship. It outlines five models for interpreting John and highlights his own multi-faceted approach to the Gospel that emphasises literary, historical, and theological readings. Part 2 contains three essays on the character of the Gospel. Chapters consider “the Jews” in John as well as the parting of the ways, the way in which John’s Gospel fuses the temporal horizons of the community’s present with the historical story of Jesus’s work in the past, and the background and function of dualistic imagery within the Johannine story. Part 3 follows with three essays on Jesus’s death, resurrection, and glory. Frey argues that John depicts Jesus as raised bodily. Such a claim has implications for how the cross is viewed with respect to Jesus and how readers’ eschatological hopes are to be framed. In particular, God’s glory has been made visible in the crucified Christ.

Part 4 follows with further reflections on John’s understanding of the incarnation, Jesus, and God. Frey points out that the image of the Word “dwelling among us” (John 1:14) taps into traditional discussions about God dwelling among his people, transfers eschatological imagery into Jesus’s ministry, and enables readers to understand the meaning of the divine presence in Jesus. Frey also devotes attention to God in the Fourth Gospel, who has often been neglected in favour of discussions of John’s Christology. The chapter concludes by arguing that for John God has revealed himself in Christ, has entered human history in Christ, demonstrates his love in the cross, overcomes human rejection in love, and transcends spatio-temporal limitations. John’s theological articulations represent an important step toward the Trinitarian thought patterns that were later formalised in the creeds. The volume comes to a close with reflections on how Johannine theology might be seen as the climax of New Testament theology.

While each of the essays can stand alone, the entire volume is a model of high-level New Testament scholarship. The chapters draw on a wealth of historical and contextual knowledge that are brought to bear on the interpretation of the primary text—John’s Gospel. The essays on incarnation, Christology, and the doctrine of God are particularly worth reading in this regard. Frey’s consistent attempts to locate his work alongside other researchers makes readers aware of where Frey sees himself in relation to other scholars and provides readers with a map of Johannine scholarship that is especially useful for English-speakers since it draws attention to German-language scholarship. Frey highlights the Farewell Discourses (John 14–17) as in many ways the apex of John and argues that the Gospel of John makes the story of Jesus present to its readers by fusing temporal horizons. The Jesus who meets the community in the present is the Jesus who is remembered in the Gospel. Although Frey raises questions about John’s value to scholarship on the historical Jesus because John fuses Jesus’s story in the past with the community in the present, it is worth pursuing this issue further to see whether and in what ways John may be used as a corroborating witness for research on the historical Jesus. The questions of scholarship are rarely exhausted, and Frey’s volume is to be commended for answering many questions while simultaneously raising further questions to be explored by others.

Two comments should be made in conclusion about the translation. First, the text is readable and accessible. The translation does not result in stilted prose but carries the reader smoothly along the paths of Frey’s lively thought. Second, with regard to chapter 7—the only chapter for which the present reviewer has compared the translation with the original—the translation faithfully follows the German text without sacrificing readability in English. Frey’s exegetical and theological comments are consistently worth engaging throughout the book, and the translation by Coppins and Heilig enables a broader audience of English-speakers to access these observations more easily than would be the case if readers instead had to read the text in a second language. This book is recommended for students and researchers of John as well as for the libraries that support research in biblical studies.