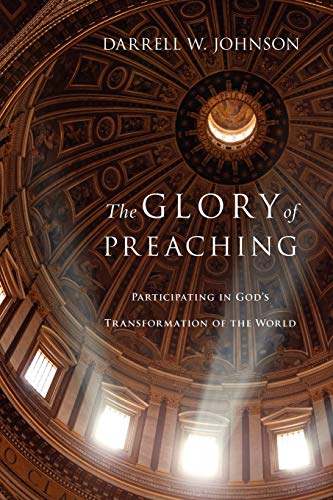 The Glory of Preaching: Participating in God’s Transformation of the World

What happens when we preach? Darrell W. Johnson, associate professor of pastoral theology at Regent College, makes three claims: (1) when God speaks, something always happens; (2) when a preacher speaks God’s Word, God speaks; and (3) when a preacher speaks God’s Word, therefore, something always happens. These claims form the foundation of Johnson’s theology of preaching. How does he explore these themes?

Chapter 1 opens Ezek 37 to answer why it happens. The bones came to life because of the power of God’s Word. His Word does not only inform—”it transforms” (p. 25). Johnson then tackles the question “Does it really happen always?” in chapter 2. After reviewing the context of Jesus’ parables in Matthew, Johnson asserts that the key to understanding the parable of the sower in Matt 13 is accurately understanding the verb syniēmi, which means to understand or to stand under (see F. Dale Bruner, The Churchbook: Matthew 13–28 [Waco: Word, 1990], 491). When people choose to stand under God’s Word when it is preached, something always happens in their lives.

Chapters 3–4 consider where and how it happens. Grappling with both the world of the Bible and contemporary culture, Johnson describes how every biblical text participates in five works. One of these, for example, is encounter: “an encounter with God in Jesus Christ” (p. 60). Where and how do preachers speak about this encounter? Johnson first depicts contemporary contexts in which preachers communicate the Word ranging from outreaches in city parks to Sunday morning services to community civic events. He then unpacks the meanings of the seven Greek verbs that refer to preaching, applying these verbs to various contexts. For example, kēryssō is rooted in a noun that refers to a messenger sent and authorized by an emperor to speak the emperor’s message (p. 83). Kēryssō, or heralding, argues Johnson, has a place both at public events and in Sunday morning services. By filling his book with illustrations, from SUVs to cobweb-filled sheds to the Matrix, readers have a model of how to communicate in various contexts. Throughout the book, Johnson strikes a balance between the academic rhetoric that echoes throughout seminary classrooms and the language of lay preachers resounding in church buildings, movie theaters, and store fronts.

Part Two delves into the mechanics of preaching. Perhaps his best advice here for preachers could be summarized as “Preach for the Ear” (ch. 6) and “Imply, don’t apply” (ch. 7). Chapter 6 demonstrates the principle of preparing sermons for the ear and not the eye. After all, the audience listens to rather than reads the text of a sermon. To illustrate this, he presents a paragraph prepared for the eye and then a second version of the same text rewritten for the ear. Johnson borrows from G. Robert Jacks’s Just Say the Word: Writing for the Ear to offer tips on how to prepare sermons for the ear, such as, “Write the way you talk, not the way you write” (p. 150) and “Speak in ‘breath bites’” (p. 152). Since Johnson often slips into a “preaching mode” during his book, his readers encounter many examples of preparing sermons “for the ear.” In this chapter and elsewhere, Johnson is so effective at summarizing others’ work that some readers may assess it as having the flavor of an annotated bibliography. This is a strength of this introductory book on homiletics. Johnson distills what might otherwise be difficult material, clarifying it while also directing preachers to further reading material.

Chapter 7 speaks to preachers who tend to make applications WWJD-style. If a preacher applies a text by urging listeners, “We need to make this work in our lives,” then the preacher is wrongly encouraging his audience “to be perfected by the flesh” (p. 166). People do not make it happen. God does. If preachers should not encourage listeners to “throw themselves on themselves” (p. 166), what then should they do? Johnson asserts that if preachers “are to give any imperative, any steps to take,” their steps should be within the “context of the text’s own inherent implications” (p. 163). Johnson poignantly illustrates implying the text in a manuscript of one of his own sermons on Matt 11:25–30, which is found in the epilogue.

The Glory of Preaching balances a fresh presentation of homiletics with tried-and-true approaches from experienced preachers. Johnson strikes the reader as a diligent student of the Word, an enthusiastic preacher, and an experienced coach who longs to see other preachers participate in God’s transformational work. This book can reignite the preaching of pastors, regardless of their preaching experience. It is also highly recommended for seminary students.