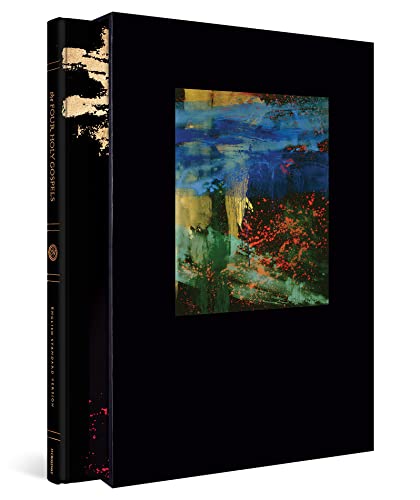 Virtually unprecedented in recent history, an individual artist has been commissioned to illuminate the four gospels in contemporary artistic idiom, and the leadership of Crossway Books, the commissioning agent, gave him “complete artistic freedom.” The artist, Makoto Fujimura, is well known as founder of the organization IAM (International Arts Movement, New York and Tokyo) and as a Presidential appointee to the National Council on the Arts (2003–2009) in Washington. Fujimura has contributed internationally as an ambassador for the arts, speaking with leaders in churches, businesses, and arts organizations as well as through his participation in American governmental policy-making for the arts. His own paintings are exhibited in museums and commercial galleries internationally.

President of Crossway Books, Lane T. Dennis, took a bold step in 2009 when he contacted the artist to commission the illuminations. Engaging a fine artist, not an illustrator, could easily move the project away from the taste of the majority of the publisher’s buyers. Moreover, hiring a practitioner of an art form marked by near-total abstraction to illuminate the Word of God might also easily result in alienation of the more conservative in the publisher’s constituency.

Yet The Four Holy Gospels is a success story from the beginning despite the risks involved. First, the quality of the art generated by Fujimura is of the highest order and is surprisingly embraced by both modern art aficionados and those whose artistic tastes are more traditional. Second, the artist himself is a winsome apologist for contemporary artistic style wedded to his passionate advocacy for the legitimacy of Christian faith within the secular arts community. The artist’s life speaks volumes and goes a long way to reconciling the apparent paradox of traditional Christian faith and avant-garde artistic sensibility.

Fujimura lives and works at Ground Zero in New York City—and survived, along with his young family, the devastation of the 9/11attack in 2001. He has written extensively about the experience and even recently stated that one of the main paintings for The Four Holy Gospels, entitled Tears of Christ (which serves as frontispiece and cover for the entire project), was directly inspired by that traumatic time in his personal life and in the national experience. Fujimura states, “Today we have an artistic language of waywardness and fragmentation, but we do not have a cultural language of homecoming.” Tears of Christ, taken as it is from John 11 and the shortest verse in the Bible, communicates deeply the spirit of the entire project: a vision of hope and homecoming amidst the ruins, akin to Isaiah 61:3–4:

to grant to those who mourn in Zion—

to give them a beautiful headdress instead of ashes,

the oil of gladness instead of mourning,

the garment of praise instead of a faint spirit;

that they may be called oaks of righteousness,

the planting of the Lord, that he may be glorified.

They shall build up the ancient ruins;

they shall raise up the former devastations;

they shall repair the ruined cities,

the devastations of many generations.

Fujimura completed five major paintings for this project—four to be used as the main plates for the introductions to each of the Gospels and a fifth (Tears of Christ) for the frontispiece. He created eighty colorful calligraphic characters as chapter heading letters, along with one hundred and forty page embellishments. All of the visual elements are tied to textual moments or emphases on a given page or chapter, and all of them harmonize sensitively with each other and the undefined “white space” of the page itself.

Japanese artistic sensibility is characterized by contemplative response to space, to time, and to nature—and a particular reticence with regard to human interventions therein. Consequently, the undefined spaces of a painting—the white spaces—become pivotal parts of the emotional and aesthetic experience for the reader/viewer. And the page embellishments Fujimura created for The Four Holy Gospels convey much of that tradition, employing drips, apparent accidental marks and strokes, and a playful quality that is nevertheless masterfully disciplined and seldom merely spontaneous. All is steeped in discipline, prayer and skillful practice.

Fujimura’s technique is complex––a hybrid of traditional Japanese and modern American painting practices. Nihonga,the traditional method, means simply Japanese-style (as contrasted with Western painting, called Yo-ga or Western-style). In Nihonga, the artist carefully grinds mineral pigments, mixes them to varying consistencies in animal hide glue, and applies them most often to mulberry paper or silk. Fujimura, who was born in Boston but raised and educated in both Japan and the States, has artfully joined the two traditions, employing traditional mineral pigments on many different sorts of surfaces in both traditional and innovative strokes. The particular virtue of the Nihonga technique is the lovely manner in which the pulverized mineral fragments refract ambient light, giving a crystalline glow to the colors, to the surface of the painting, and to the very space the art occupies.

Akin to the Japanese reluctance to intervene heavily in nature’s appearances, the artist applies colors in careful, lightly applied layers, allowing the paint to pool and slip across the surface of the paper and to intermix “wet-into-wet.” Often the final abstract image emerges mysteriously in and through these light touches, with what Fujimura calls grace time being enacted via the very act of painting—with no set “picture” in mind. “Grace time” is the literal translation of Charis-Kairos, a coined Greek termthat is also in the title of the book’s frontispiece, the full title being Charis-Kairos: Tears of Christ.

Like the Abstract Expressionists of the New York School (ca. 1940s and 50s), Fujimura believes the act of painting itself has significance, and the art object that results is, in a very real sense, a fossil of that free act.

This may seem a far stretch from the traditional text-and-image relationship we are accustomed to in the Western traditions of art. And it is. But this approach—blending traditional Nihonga and Abstract Expressionist modern painting—brings a vitality and beauty to Fujimura’s illuminations, allowing this volume to breathe new life into visual theology. Furthermore, the blending of Eastern and Western sensibilities has much to offer by way of trusting in the Holy Spirit’s leading in both art and in speech. Real conversation can emerge only when those involved refuse to over-determine outcomes and each listens responsively to the other. The Eastern reticence to intervene forcefully is a great boon in correcting our own overly “chatty” dispositions with regard to the mystery of the Word made Flesh. In Col 1:15–19, Christ is called the “true eikon” of the invisible God—the same God whom no human being may look upon and live. So Fujimura’s very refusal to define and delimit in his imagery communicates what is fitting for the holy subject he attempts to evoke.

One might ask why it is important on the 400th anniversary of the King James Bible to render the text in the ESV and illuminate it with a contemporary hybrid of Japanese and modernist American fine art—instead of more familiar sorts of illustrations for such an august translation. Regarding the translation, the KJV was created as an easily readable version for a then-contemporary readership. Regarding the art, juxtaposing abstract illuminations with sacred words seems only right given the intentions of the artist and his commissioning agents, namely, to “let your light shine before others, so that they may see your good works and give glory to your Father who is in heaven.”

Shining one’s light requires that it indeed be one’s own light—not a generic sort of illumination fulfilling static expectations of an audience—but the honest, earnest expression of love for God and God’s glory that can be seen only in the fitting form mediated through an individual person. In this case, Makoto Fujimura has indeed let his light shine in order that God may be glorified. And proof of this is the fine example of this man of God who unstintingly gives of his time and talent for the furtherance of the gospel and for the illumination of The Four Holy Gospels in a contemporary light, which is the task of every succeeding generation as we seek to translate those accounts to our own people in our own time. Those who painstakingly forged the KJV four hundred years ago for their generation would be happy to know that ours has been faithful in doing the same. Thanks to Crossway and to Fujimura, we have a fine example of this very thing.