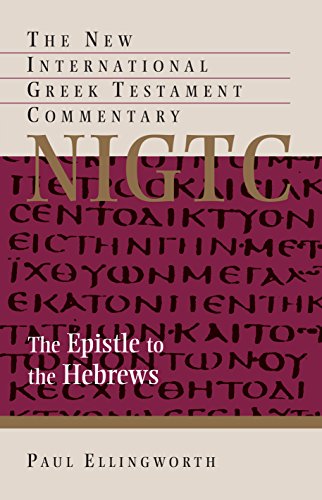 The Epistle to the Hebrews: A Commentary on the Greek Text (New International Greek Testament Commentary series)

For many years a regular contributor to the Biblical Translator and other journals, Ellingworth has written numerous articles on various NT passages and related discussions. He serves as a translation consultant with the United Bible Societies and holds honorary posts in the Universities of Aberdeen and Edinburgh. He wrote A Translator’s Handbook on Paul’s First Epistle of Paul to the Corinthians (1985) with H. Hatton and A Translator’s Handbook on the Letter to the Hebrews (1983) with Eugene A. Nida. With a lifelong interest in Hebrews, Ellingworth has studied this epistle and has now published two commentaries in quick succession: a concise commentary on The Epistle to the Hebrews in 1991 and his magnum opus Commentary on Hebrewsin 1992.

Ellingworth’s last commentary is in the New International Greek Testament Commentary series and by its nature is a technical work. It is indeed a goldmine of information for any NT scholar who has an interest in this epistle. The list of abbreviations and the bibliography alone, comprising together nearly a hundred pages, are worth the price of the book. The commentary itself includes 650 pages and is followed by almost 30 pages of indexes of subjects, authors and Greek words discussed.

The introduction to the commentary covers more than 80 pages, with extensive discussions on authorship, readers, destination, date, source and background, structure and genre, theology, purpose and text. Although the section on theology covers a broad range of topics, a thorough discussion would have been appreciated on the priesthood of Christ in relation to Melchizedek’s priesthood and contrasted with the Levitical priesthood. A discussion on the doctrine of the priesthood in the context of redemptive revelation would enhance ‘The Theology of Hebrews’ (pp. 63–77).

Ellingworth takes the reader through the Greek text of Hebrews in a word-for-word approach. He examines the text, grammar and interpretation of each individual word. The author copiously notes the views of ancient and modern authors with all their possible nuances in exegesis. He is the first to admit that his commentary is highly technical, pitched to the level of fellow scholars to debate the explanation of the Greek text. Ellingworth readily provides theological arguments throughout his commentary. But he also knows limits, as is evident from one of his remarks: ‘The wider theological discussion lies beyond the scope of this commentary’ (p. 426).

After looking at the alternatives to the exegesis of a given passage, Ellingworth is usually cautious and modest in stating his own position. He generally follows John Calvin’s prudent advice: ‘The best rule of sobriety is, not only in learning to follow wherever God leads, but also when he makes an end of teaching, to cease also from wishing to be wise’ (p. 76). Applying this wisdom, Ellingworth customarily presents his view by stating what the author of the epistle seems to say. For instance, when he discusses the meaning of the terms who or some (3:16), Ellingworth writes, ‘In the light of 11:40, the author’s hope seems to be rather the ultimate inclusion of God’s “resting-place” of faithful members of God’s people, of the author’s generation together with OT saints’ (p. 230).

The epistle has a number of cruxes, among which is the contents of the Holy of Holies (9:4). Does the author of Hebrews point to the altar of incense or the incense-burner? After both listing and discussing the options, Ellingworth chooses one of them and wisely comments: ‘[The author’s] main concern was not with details of furniture (cf. v. 5b) but with the separation between the outer and inner areas (v. 8)’ (p. 426; and see p. 427). Further, he explains that the location of Aaron’s rod was not in the ark of the covenant (9:4) but ‘the rod was placed alongside or before the ark’ (p. 429).

Perhaps the explanations of some passages should be augmented, for example in respect to the ‘loud cries and tears’ that Jesus offered in the garden of Gethsemane and from the cross at Calvary (5:7). The few references to these two places that Ellingworth furnishes (pp. 288–9) ought to be fully explained in the light of Jesus’ high priestly work and sacrifice. Next, a discussion of the phrases none of you and no one (3:13; 4:1, 11) should centre on the corporate responsibility of the entire Christian community. And last, commenting on the present tense of the verb to enter (9:6), Ellingworth states: ‘The present probably does not suggest that the temple was still standing’ (p. 433). But does this observation say anything at all about the epistle’s date?

This is an excellent commentary for the scholar who knows Greek. The material, however, is too far advanced for the student pursuing initial theological studies. Nevertheless, the content of the book serves as a challenge and stimulus to learn Greek. Students of the Bible who have no knowledge of Greek are urged to spend the time and effort to become acquainted with tire original language of the NT. Then they will be able to benefit greatly from the wealth of material Ellingworth has made available in this superb volume.