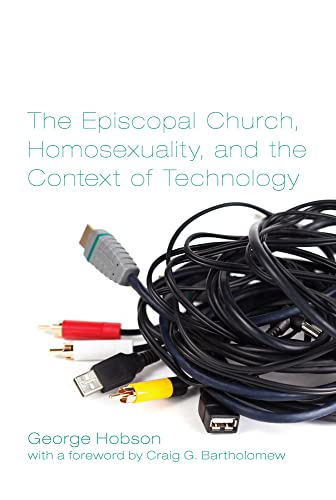 The Episcopal Church, Homosexuality, and the Context of Technology

In current debates about same-sex attraction, gay marriage, and the traditional view, it is increasingly clear that the social and historical background is all important. One of the most plausible arguments for departing from thousands of years of tradition is the civil rights narrative. Most of us know people, or have family members, who have lived in a closet until it became permissible to come out and be … free. In a high profile “exodus” in 1991, the Rev. Peter Gomes, Chaplain at Harvard University, proclaimed himself to be a practicing homosexual, to the consternation of some, and the delight of others. “I am a Christian who happens as well to be gay,” Gomes declared, adding that, “Those realities, which are irreconcilable to some, are reconciled in me by a loving God” (Mary Jordan, “A Chaplain Comes Out Swinging,” The Washington Post, 8 August 1992, http://tinyurl.com/hhpbr77). The occasion was the publication of a rather thoughtful conservative student magazine which had suggested there was a better way than a same-sex lifestyle. Gomes resolved to devote his life thence forward to addressing the religious causes of homophobia.

As is well-known, even by folks outside the church, in 2003, the first practicing gay priest, Gene Robinson, was elected a bishop in the Protestant Episcopal Church in the United States, by a vote of 62 to 45. Robinson had been heterosexually married, but divorced his wife in 1986. His ordination became a cause célèbre inside and outside the entire Anglican Communion. He later divorced his partner, Mark Andrew, in 2014, citing, in a call for sympathy, that “life is hard, and it just keeps on coming, ready or not.”

For those of us committed to defending the traditional view, we have commonly experienced a kind of stammering. Faced with the civil rights narrative, how could we decently propose “heteronormativity”? Faced with a man of the cloth for whom life has been hard, how can we take a position that seems cold and insensitive? And now, after the United States Supreme Court’s Obergefell et. al. vs. Hodges decision on June 26, 2015 that recognized the legality of same-sex marriage, we appear not only against civil rights, a God of love, and cold-hearted, but also outside the law.

Perhaps the most surprising aspect of these radical changes is the speed with which they took place. Twenty years ago most of these developments would have seemed impossible, except to the most sanguine supporters of same-sex unions. So, what happened? George Hobson tells the story in a most compelling way. He connects the tidal wave to technology. That is, he describes the change of attitudes in many western people to a social context which has witnessed a sea-change in the definition of the human self, of which technology is a primary exhibit. While the civil rights parallel appears compelling, it is actually quite misleading. Many African Americans actually resent the comparison. There has been homophobia and gay-bashing, of course, even in the church. Hobson acknowledges these and calls for repentance. But a deeper narrative concerns the shift in our very concept of the self.

Charles Taylor has argued that the West has moved, not in twenty years, but in five centuries, from what he calls the “porous self” to the “buffered self” (The Secular Age [Cambridge: Belknap, 2007]). In the Middle Ages it would have been unthinkable to deny the basic reality of a God who defines who we are, because, being porous, people could not help but let this truth permeate their being and worldview. But gradually, in a process he calls reform, the self has become resistant to such influences, because it has a self-directed strength, allowing it to receive blows, to be buffered, but without passive acquiescence. And so we are now in a world where not only is God not unthinkable, but he is merely an option, one among many. In short, we can choose who we want to be. In a similar way, George Hobson argues that technology has supported an autonomy of the self. We can be whatever we want to be, because we have the technique at hand to do so. Although he is clearly influenced by Jacques Ellul, the French sociologist who was a pioneer in the study of technology’s false promises, Hobson does not eschew the wise and judicious use of this God-given blessing. But he examines technology as a significant side-effect of a deep and radical philosophical change, the shift from the biblical anthropology, which tells us we are made after God’s own image, to the world of Nietzsche, where we can be the Übermensch, the overman who leads us from our alienation to a place of meaning, based on the power of the human will.

The point not to be missed is that we are facing a secular kind of anthropology, one that prizes choosing the person we wish to be, regardless of how we were made, that is, regardless of the framework we may have inherited. Hobson takes us through the pages of Genesis and comments on its view of humanity. Male and female are both equal and different. Such unity and diversity constitute the beauty of mankind made after the divine image. Among other fascinating supports he cites the classic study of Western literature Mimesis by Erich Auerbach. As readers of his illuminating literary analysis will remember, Auerbach begins by comparing the two different concepts of heroism, the Homeric and the Mosaic. Whereas Odysseus is celebrated for his pedigree, Abraham is remembered because he walked with God. Therein lies the glory of the human condition, according to Scripture.

The Episcopal Church, Homosexuality, and the Context of Technology contains rich considerations of biblical theology, the history of ideas, and interactions with current literature on same-sex attraction. The somewhat cumbersome title should not mislead us. Although there are references to the recent decisions in the American Episcopal Church and to this denomination’s particular liturgical practices, the book is a broad appeal for a better understanding of the issues. It is not only sharply critical of the modern turn of events, but theological, and indeed pastoral, in tone. Consequently, either directly or by implication, it covers the larger questions of human identity, which includes gender, children’s education, support of gay people as human beings, and the like. It would be a shame if this book became lost between the cracks. Hobson declares his desire to dialogue with anyone who is open to discussion. As Craig Bartholomew says in his Foreword, “one could not wish for a better dialogue partner” than George Hobson. So, will we be swept-up unthinkingly by the plausible liberationist narrative, or are we willing to interact with a most thoughtful presentation of the historic view on marriage?