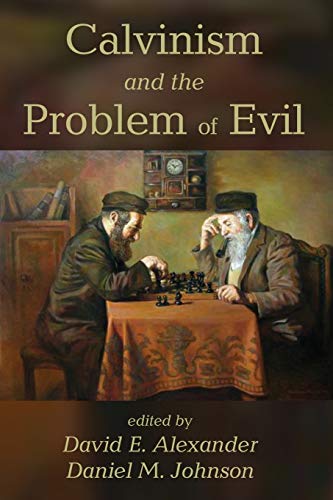 Calvinism and the Problem of Evil

In the book, Calvinism and the Problem of Evil, David E. Alexander and Daniel M. Johnson, eds., have collected a group of first-rate scholars to evaluate claims for and against the historic Calvinist position on the problem of evil. This volume evaluates the following theses: (1) libertarian freedom, or Molinism, provides the best paradigm for Christian philosophers to address the problem of evil (p. 1); (2) Calvinism makes God the author of sin, therefore it is philosophically and morally unacceptable to address the problem of evil (p. 16); and (3) alternative theories to Calvinism must be fairly weighed in terms of their philosophical perplexities and advantages (p. 228). Throughout the book, some of the contributors are sympathetic to the historic Calvinist position, so they defend that model. On the other hand, others (who do not personally affirm the Calvinist position) point out what they consider to be weaknesses of the view, and offer their recommendations to strengthen the arguments in favor of the Calvinist interpretation.

Concerning the first thesis previously mentioned, Alexander and Johnson introduce the book by discussing libertarian and compatibilist accounts of human freedom and preparatory issues related to determinism, free will defenses, and evidence for Calvinism (pp. 2–5). They claim, “Many Christian philosophers feel that they need a libertarian view of free will in order to handle the problem of evil, and philosophers have perhaps felt that need more keenly than theologians because they are more often engaged with non-Christian and anti-theistic philosophers and their arguments” (p. 2). The authors respond to this present-day trend against Calvinism, noting, “It isn’t as if Calvinist responses to the problem of evil have been thoroughly worked out and decisively refuted, though; for the most part, they haven’t been tried, at least in the contemporary literature” (p. 2). Therefore, this book seeks to justify the historic Calvinist position in the contemporary debate related to God being the author of sin, the first sin by Adam, and the specific axiological problem of evil.

To address the book’s second thesis, it is better to provide some of the traditional solutions offered by Calvinists to refute the claim that God is the author of sin. Alexander and Johnson suggest that historic Calvinists tend to (1) deny altogether that Calvinism entails that God causes or intends sin; (2) claim that it would not be contrary to God’s goodness if he did cause sin; and (3) utilize a tu quoque (e.g., you also) strategy, which argues that alternative non-Calvinist theories entail the same objectionable properties as Calvinism (p. 6). The scholars in this book incorporate these classic solutions and develop new arguments to defend Calvinist solutions to the problem of evil. The greatest strength of the book is its clarifications and development of arguments by interacting with present-day theories and literature. The following points serve as examples of both.

First, Greg Welty appeals to the Westminster Confession of Faith, both in its positive and negative claims, to demonstrate that historic Calvinism suggests (1) God ordains whatsoever comes to pass; and (2) the negative claims or “protecting clauses” entail: “(i) ‘neither is God the author of sin,’ (ii) ‘nor is violence offered to the will of the creatures,’ (iii) ‘nor is the liberty or contingency of second cause taken away . . .’” (p. 58). This first type of argument demonstrates that some libertarians misrepresent the historic confessional stance of Calvinism. In brief, sometimes non-Calvinists are not actually critiquing Calvinism, but their understanding and false interpretations of Calvinism.

Second, several authors attempt to clarify their terminology by noting the various definitions of “determinism.” They note how in the contemporary literature there is a distinction between natural or this-world determinism and divine determinism (p. 22). There is also a distinction between different types of causation (e.g., a-causation or divine causation and b-causation or intramundane causation) and models of providence (e.g., the Domino Model of Providence verses the Authorial Model of Providence) to explain why divine causal freedom does not entail that God is the author of sin (pp. 204–10). Each of these distinctions are made to recognize there are several kinds of determinism and models of providence Calvinists should and should not be committed (p. 204). James Anderson notes, “Calvinists need not be committed to material or physical determinism [causal determinism included]: the thesis that every event, including human decisions and actions, is determined entirely by prior physical events in conjunction with physical laws” (pp. 204–5). The Calvinist position should therefore not be confused with the claims associated with their position by non-Calvinists.

Third, since there is a Creator-creature distinction, divine causation is wholly different than creaturely causation. “Divine causation is sui generis and is thus related only analogically to creaturely causation.” Therefore, Anderson goes on to note, “For this reason, the use of phrases such as ‘first cause’ and ‘sufficient cause’ shouldn’t mislead us into thinking that Calvinism is committed to what we might call the Domino Model of Providence” (p. 207). Anderson also suggests that Aristotle’s notion of akratic action can further explain the relationship between the Divine first cause and Adam’s sin in the garden (pp. 217–220). The value of this type of approach is that it attempts to synthesize the best of Calvinist philosophical theology, found in the works of individuals such as Jonathan Edwards, with the great theological and exegetical treatises comprised in the works of Martin Luther, John Calvin, John Owen, and the Westminster divines.

Fourth, Calvinists can and have appealed appropriately to divine mystery, skeptical theism, and divine glory defenses. However, several treatments in this book uniquely recognize and advance the Moore Switch as a distinct Reformed way to address the problem of evil (p. 15). The Moore Switch argues that the evidence for the existence of God is strong enough that the right way to react to our inability to understand God’s reasons for allowing evil is not disbelief, but to conclude that God must have a good reason and has chosen not to reveal it to us. For example, some of the authors suggest that Reformed epistemology’s claim to immediate knowledge of God grants enough strong evidence in favor of the existence of God that any skeptical conclusions to the contrary function as a reductio ad absurdum refutation of at least one of the premises for the problem of evil argument (pp. 15, 17, 50–52, 273–78). This distinctly Reformed epistemological approach, coupled with the traditional arguments for the existence of God, serves to demonstrate that the preponderance of evidence favors the existence of God, even though we do not understand the reasons God allows evil to persist.

The third thesis of this book suggests alternative theories must also be evaluated on their own terms according to their advantages and disadvantages. Greg Welty uses to his advantage a tu quoque argument against Molinism, arguing that its model of divine causation is “sufficiently analogous to [Calvinist] sufficient causation, such that Molinism inherits all the alleged Calvinist liabilities anyway, with respect to divine authorship of sin, responsibility, and blame” (p. 57). Consequently, the Molinist paradigm offers no moral advantage over the Calvinist position. Even though Molinism rejects divine causal determinism, it “nonetheless holds to a weaker form of divine determinism” (p. 224). Anderson agrees with Welty, suggesting, “On both the Calvinist and Molinist accounts, then, God decreed that Adam would sin and that decree infallibly determined that Adam would sin” (ibid). To sum up, these tu quoque types of arguments, alongside the other arguments and proper distinctions, seem to alleviate many of the libertarian, or Molinist criticisms against the Calvinist position.

Nevertheless, Alexander and Johnson’s work is not without its own problems, even if they are merely surface level. First, this book markets itself as a text that offers a markedly Calvinist response to the problem of evil. But the problem is that some of the authors do not present or defend a Calvinist response to the libertarian alternatives. The editors admit “most of them (though not all of them) defend Calvinist responses to those arguments” (p. 2). This diversity amongst the authors sometimes presents a clouded view of Calvinism to its audience and could potentially confuse its readers (or objectors) about what constitutes Calvinism’s response to the problem of evil. This volume would be strengthened by highlighting which arguments or persons deviate from the historic Calvinist position (perhaps in the introduction or in the particular chapters). This clarification could also ward off any misrepresentations or false characterizations of the Calvinist position by non-Calvinist alternatives interacting with the book. Second, for the most part there is an evenness of style on the part of the editors. But in other places there is not. For example, in some chapters they capitalize the masculine pronouns referring to God (p. 138) and in other chapters they do not. Some authors use Roman numeral outlines, and other authors do not. This book would be strengthened if later editions fixed these slight editorial features.

First things first, however. Alexander and Johnson (along with the other contributors) provide a highly detailed philosophical defense of historic Calvinism. They also offer several sophisticated criticisms of incompatibilism, or libertarianism, that coincide with the biblical text and historic Reformed Confessions and Systematic Theologies. Philosophers of religion who embrace Calvinism owe a great debt of gratitude to Alexander and Johnson for synthesizing the multi-faceted tenets of Reformed theology into a philosophical defense of Calvinism and the problem of evil. For those philosophers of religion who do not embrace Calvinism, I am certain this book will present a new array of arguments to wrestle with in their defense of alternative positions. Regardless of one’s philosophical or theological position, this book deserves to be on the shelf of all students interested in the problem of evil, the problem of divine and human responsibility, and historic Calvinism.