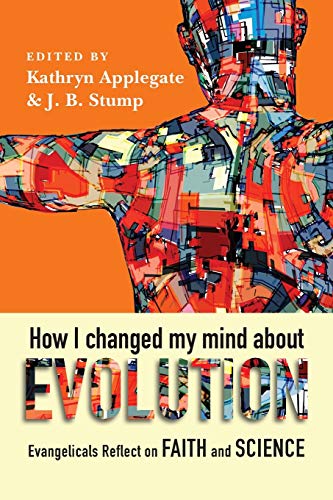 How I Changed My Mind about Evolution

There is something uniquely compelling about a personal testimony that goes far beyond simple logic and evidence. Stories of transformation provide emotional reassurance in the face of uncertainty. Stories give us examples of people making difficult choices and living to tell the tale. It is no surprise then that the first book from a new collaboration between Intervarsity Press and the BioLogos Foundation is a collection of testimonies.

Edited by Kathryn Applegate and Jim Stump, How I Changed My Mind about Evolution presents the stories of 25 evangelicals and their favorable views on evolution (contributors include scholars like N. T. Wright, Richard Mouw, James K. A. Smith, Oliver Crisp, and Tremper Longman III). The authors include most of the usual names associated with BioLogos, including founder Francis Collins, current president Deb Haarsma, and biology fellow Dennis Venema. The book contains nothing surprising or novel to readers already familiar with BioLogos or Collins’s The Language of God (New York: Simon & Schuster, 2006). The authors agree that evolution poses no fatal challenge to Christian theology, and some would claim that evolution enriches Christian theology and experience.

With that in mind, what can be said about this book’s message that has not been said many times before? Indeed, reviewing someone’s personal testimony seems oddly invasive and inappropriate, but above these personal elements, the reader will find broader themes that recur in many stories. These themes of theology, intellectual satisfaction, and personal conflict are well worth examining, regardless of one’s own position on the question of evolution. In the interest of full disclosure, as a young age creationist, I am strongly opposed to the BioLogos position and the message of this book. Even still, there is much to be gained by carefully hearing the message of these brothers and sisters in Christ.

One of the most striking themes from the very beginning of the book is the pressure these authors feel to choose between science and faith. The reader again and again encounters this contrast, as if accepting young age creationism is equivalent to rejecting science itself. Put in other terms, evolution is science in the same way that 2 + 2 is 4. As a scientist and a young age creationist, I obviously find this to be a false dilemma and deeply insulting. If I follow their logic, I must conclude that I have rejected science altogether and have no intellectual integrity because I accept young age creationism. I suppose most creationists would stop at this offense and decry the falsity of the message, but these authors seem so profoundly moved by this dichotomy, I have to wonder why they believe this. Why do they think that young age creationism necessarily entails rejection of science?

This notion of creationism-as-orthodoxy is the second major theme that informs these authors’ experiences. The book contains several anecdotes of condemnation received by those who question creationist ideas. At the very least, a number of these authors were fearful or worried about how other Christians would react to their doubts about young age creationism. Indeed, a major theme of the entire book is overcoming this stigma and trauma of being an evangelical that questions creationism and accepts evolution. After all, the gospel as recorded in the New Testament says nothing about accepting a particular date of creation or even the historicity of Adam and Eve. Evangelicals surely need a better way to discuss important issues that are not gospel issues without blunt condemnation.

The final major theme is the reasonableness of evolution. In this, the authors and I are in close agreement. Despite the beliefs of many young age creationists, there is a decent case to be made for evolution based on a reasonable interpretation of scientific evidence. The repeated claims that “there is no evidence for evolution; all evidence supports creation” is completely false, despite their popularity. Given the compelling case for evolution and the hostility with which questions about creationism are met, the reader should not be surprised that these authors are willing to consider the “fact” of evolution, despite the occasional theological misgiving.

It is important to acknowledge that this brief sketch does not capture every essay in this collection, and some authors might even object to specific themes identified herein. Nevertheless, these themes do recur frequently in the creation/evolution debate. What lessons can we learn from them? First, young age creationists seem to be doing a poor job of presenting our position. Too many of these authors have an honestly mistaken perception of what young age creationism is. Second, many young age creationists need to change some of their rhetoric. Denigration of evolution and hostility towards those we disagree with should not be part of this conversation.