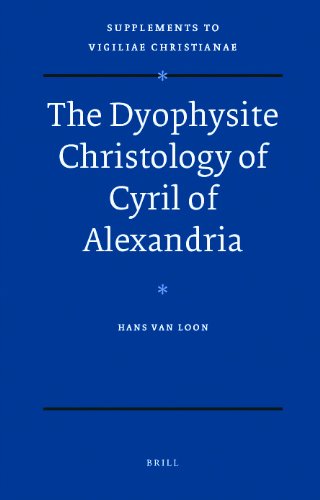 The Dyophysite Christology of Cyril of Alexandria

In the aftermath of the Council of Chalcedon in a.d. 451, the Christian Church split, as some bishops rejected Chalcedon’s dyophysite (“two nature”) teaching, and upheld instead a miaphysite (“one nature”) Christology. The central historical figure in this split was Cyril of Alexandria, who presided over the Council of Ephesus in a.d 431 and successfully had Nestorius deposed by the council. The way this story is often told is that Cyril actually held to a miaphysite Christology (as a crypto-Apollinarian), but was forced to alter his position to dyophysitism in order to appease Nestorius’ allies in the Formula of Reunion in a.d 433. Then with the further support of Pope Leo’s Tome, Chalcedon codified this dyophysite Christology, passing it on forever to the Eastern Orthodox, Roman Catholic, and Protestant churches, in distinction from the churches that reject Chalcedon, known today as the Oriental Orthodox, including, among others, the Coptic Orthodox and the Ethiopian Orthodox churches. These miaphysite Christians who disagree with Chalcedon therefore see themselves as the upholders of Cyril’s true legacy, consisting of his miaphysite doctrine prior to his critical compromise with John of Antioch in a.d. 433.

In the present volume, Hans van Loon attempts to rewrite this narrative. His task is to investigate exhaustively and systematically the christological writings of Cyril from the first two years of the Nestorian controversy (pp. 429–30) in order to determine whether Cyril’s Christology is miaphysite or dyophysite in the period prior to any supposed concessions made to the Antiochenes. The present study began as van Loon’s doctoral dissertation at the Protestant Theological University in Kampen, the Netherlands.

Van Loon’s argument proceeds as follows. He first considers Cyril’s usage of Aristotelian logic in his early Trinitarian writings and provides the best discussion of this question to date, arguing that Cyril was well aware of Aristotelian logic as filtered through the neo-Platonic commentators on Aristotle (chs. 2–3). Van Loon notes that he made some logical missteps in his Thesaurus but apparently improved his knowledge by the time he composed his Dialogues on the Trinity. Van Loon then comes up with a series of small, capital-letter English terms (see the table on pp. 200–202), which he presents as the equivalents of Cyril’s technical metaphysical vocabulary, including ousia, hypostasis, physis, prosopon, and idios. Key to his thesis is his argument that the terms hypostasis, physis, and prosopon are not synonyms for Cyril, as is often asserted in the secondary literature.

After meticulously setting up his argument by defining his terms and surveying the secondary literature—spending 250 pages doing so!—van Loon finally dives into the heart of his argument by examining Cyril’s christological writings from the first two years of the controversy. The texts he includes are De incarnatione, Contra Nestorium, the Orationes to the imperial household, and a variety of Cyril’s letters (see the chart on p. 262). For each text, he summarizes the content of the work and then looks at every occurrence of the above-mentioned key terms (chs. 5–7). Chapter 8 recapitulates and concludes the study.

Van Loon presents a compelling case that Cyril’s Christology from his earliest works was dyophysite and that the archbishop did not fundamentally alter his position in the dialogues with the Orientals, though certain aspects of his terminology and emphasis shifted over time. Some of the analysis in the chapters devoted to Cyril’s key terms seems too brief and cursory due to the large amount of primary text surveyed, and van Loon’s strongest work is in the last chapter of the book, where he looks in more detail at several disputed passages and summarizes his argument. The phrase that figures most prominently in the debate over Cyril’s Christology is his famous formula “one nature [mia physis] of God the Word incarnate.” Though Cyril is often presented as “championing” this phrase and backing away from its use only with reluctance, van Loon points out that in the writings prior to 433, it occurs only three times. Two of these times it shows up when the archbishop quotes a passage from an Apollinarian letter, which he thought was Athanasian, but in these instances he gives no apparent significance to the formula. The one remaining time the phrase occurs, it is in Cyril’s own language, but he immediately explains it using the dyophysite illustration of the body and soul of a human being. Therefore, the phrase can hardly be said to be Cyril’s favorite, and he certainly did not champion it. It was only after the Formula of Reunion in 433 that some of Cyril’s allies began to make such a fuss over it, and he had to give it more attention.

Furthermore, according to van Loon, when the archbishop does refer to the incarnate Son as a physis, he means not the divine nature, but the “composition of the two natures of the Word and the body,” resulting in one “separate reality” (p. 524). Thus, Cyril affirms the abiding distinction between the deity and humanity in Christ and is even willing to allow for a separation of the two so long as the separation remains one only of contemplation and not in reality (p. 532). Therefore, his agreement with the Antiochenes actually represents the position he had always held: there are “two natures” in Christ. In his own writings he typically, though not always, avoided speaking explicitly of the “human nature” in Christ, due to his concern to avoid all traces of Arianism, but so long as the unity of Christ was not in jeopardy, he had no problem with such language.

Van Loon masterfully engages with Cyril’s works from this period. If his book is anything, it is thorough. However, sometimes he excessively summarizes Cyrilline works. The book could have been considerably shorter without weakening its thesis. However, on the positive side, those who want an overview of Cyril’s works from these years, some of which have never been translated, now have it in this volume. Moreover, this study engages only very slightly with any fourth-century patristic sources. An even more nuanced understanding of Cyril’s Christology might be possible if one considered his works in light of the fourth-century texts he drew upon as resources (e.g., Athanasius, Gregory Nazianzus, Didymus). The book is largely free of typographical errors, though it appears that “sinful” (used three times on p. 569) should be “sinless” instead.

Despite these criticisms, van Loon persuasively shows that Cyril is hardly the miaphysite theologian he is usually taken to be. Accounts of the fifth century that present him as such need to be revised. Though the overriding emphasis of his work is on the unity of Christ, he still presents a dyophysite Christology that is largely in keeping with the Chalcedonian definition drawn up seven years after his death. Any future studies of Cyril’s Christology will ignore van Loon’s work to their own detriment.