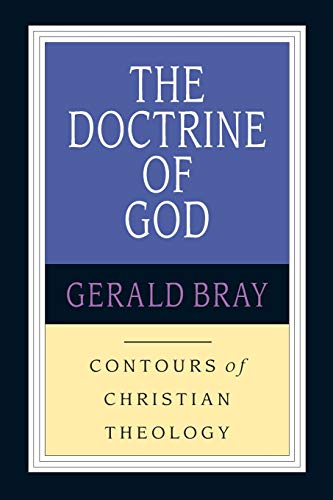 The Doctrine of God

The Doctrine of God by Gerald Bray is an appropriate volume to introduce a new series, Contours of Christian Theology, which will cover the main themes of theology from an evangelical perspective, but not as a substitute for existing textbooks and reference manuals. If this volume (which is written by the series editor) is any guide, Contours will be more explanatory and provide insights into the conceptual framework and context of the doctrines covered.

The opening chapter, ‘Our knowledge of God’, is in fact a short history of the development of Christian theology, with an emphasis on its philosophical foundations. Although it is in harmony with the general approach in the rest of the book, as the introduction this chapter requires careful reading. It could form the basis of a separate volume in itself which would make a worthwhile addition to the series.

For the purposes of this book, the doctrine of God has been restricted to ‘his personal, trinitarian subsistence’, leaving matters related to his nature, including ‘all aspects of his being in relation to things outside himself, such as proofs for his existence, creation, providence and predestination, to other volumes in the series (p. 9).

But even so, the division is imperfect, with discussion of several of these topics being integral to the theme of this book.

The major content is found in four chapters dealing with the nature of God, the Trinity, and the persons of God. In a book that is committed so strongly to recovering a fully trinitarian doctrine of God, it is inevitable that Christology should also be discussed, but, given the importance of the topic in today’s Christian world, it is strange that the person and work of the Spirit is not given a more critical place in the argument.

The overall treatment is broadly historical in form with full attention paid to philosophical developments. Biblical material is woven into the exposition, sometimes in discrete sections, but readers will often need to turn to other sources for detailed and comprehensive chapter and verse references.

The author’s main concern is to stress how important it is for our knowledge of God to distinguish the essence of God from the persons of God, and to show that the biblical, trinitarian doctrine of God which is distinctive of Christian theology could only appear when ‘the concept of person was detached from its place as one of the attributes of God, and made into a principle in its own right’ (p. 155). Much of the book is an exposition of the consequences of this distinction, and how this process can be seen at work in different types of theology (including some of the most obscure, such as the filioque controversy and the doctrine of co-inherence or perichoresis), appearing at its clearest and most important form in the work of the Reformers (pp. 199ff.).

The final chapter, devoted to ‘Constructing an evangelical theology for today’, is most intriguing in a book of this kind. The evangelical perspective is clear throughout the entire work, with the biblical teaching always being taken as a matter of fact authority, and a clear, often strongly worded, identification made of the distinction between the biblical evangelical position and the views of other traditions.

But in the climax of his argument, Bray works out from the evangelical insistence on a personal appropriation of the divine revelation of God in Christ and calls for a theology that accepts the historical Scriptures as a theological unity, challenges the modern world in the light of Scripture and is thoroughly theocentric. In the process, he engages in an insightful discussion of time and its relation to revelation, eternity and transcendence, and emphasizes the need for a fully personal and trinitarian formulation of the doctrine of God.

Overall, The Doctrine of God is a mature and well-rounded presentation, although occasionally the argument is highly compressed with copious references for further reading supplied in the notes and bibliography. It is noticeable that although this is intended as a contemporary work, the author has focused comparatively more attention on earlier periods, and has referred only briefly to pressing issues of today such as feminist theology and the charismatic movement (process theology excepted). Gender exclusive language has also been used (p. 226).

The Doctrine of God would serve well as a suitable text for advanced students, opening up for them in an interesting and comprehensive way the conceptual world and inner dynamics of Christian theology. With its suggestive observations about revelation and personal knowledge of God, it also proposes an approach to a distinctive element of evangelical theology which should be considered seriously.