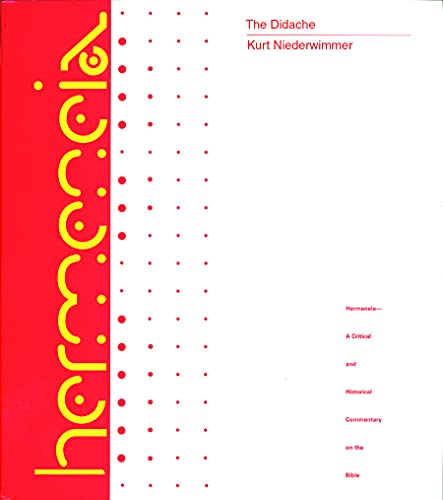 Neiderwimmer’s commentary on the Didache is the third Hermeneia Commentary on the Apostolic Fathers. These are early Christian writings close in time to the writing of the NT. Although theologically distinct from the canonical writings by virtue of standing outside the canon, historically they are close to them and therefore of great help for NT interpretation and the reconstruction of Christian origins.

First published in 1883, the Didache is a document of about the same length as Galatians, but there can be little certainty as to its date, its purpose or its provenance. There are also significant questions about the integrity of the text; different parts of the Didache appear to contradict each other, and scholars have presented different theories as to how it was edited over time.

Fundamental to Neiderwimmer’s analysis is his source critical approach, which posits a strong distinction between the Didachist’s source and his own redaction and expansions. Neiderwimmer sees the text as the work of one compiler, the Didachist, who was an early second century Jewish-Christian church leader, possibly a bishop. He may have around 120. He had sources which he compiled, expanded and interpreted to produce a kind of book of rules to order the life, worship and leadership of his local church community.

Neiderwimmer views the Didachist as fundamentally conservative. He preserves and protects old traditions but applies them to the developing current situation of his community. In so doing the Didachist is keen to reconcile differences, and Neiderwimmer uses this to explain apparent contradictions in the text over the Eucharist, for example, and the reception of itinerants.

There are four sources, possibly very ancient, and they preserve the archaic traditions of a particular local community. These sources are (1) an originally Jewish text, the Two Ways, an exhortation for the reader to choose the way of life and not the way of death; (2) a (written or oral) archaic liturgical tradition concerning baptism and the Eucharist; (3) a (probably written) archaic tradition concerning how to receive itinerant charismatics; and (4) an apocalyptic description of the end time, the ending of which is lost.

The Didachist’s own contribution may be seen primarily in his concern to Christianise the material with which he works. Thus for example it is the Didachist who by a redactional insertion at 7.1 turns the Jewish Two Ways tradition into baptismal catechesis. and who adds Jesus tradition.

Perhaps of most interest for Themelios readers will be Neiderwimmer’s discussion of the witness of the Didache to the emerging Jesus tradition and to the canonical Gospels. This is dealt with at length in his introduction, as well as in the relevant sections of the commentary. Neiderwimmer helpfully summarises previous contributions before giving his own judicious analysis. Useful synopses set out material from the Didache alongside the Synoptic Gospels and other early Christian writings.

All possible echoes of or parallels to Synoptic tradition are to be found in material which Neiderwimmer attributes to the Didachist’s own activity. The Didachist may have known Matthew and Luke, although Neiderwimmer cautiously refrains from a definitive judgement on this ‘especially complicated’ question. On four occasions, all in redactional passages, the word gospel is used. It refers not to the missionary proclamation of the life and death and resurrection of Jesus, but only ever to his words. These words of Jesus are the gospel, and they both bring salvation and regulate the life and behaviour of Jesus’ followers through binding rules that they must obey. From this gospel—sayings of Jesus either derived from or paralleled in Synoptic tradition—can be derived rules for daily prayer, for dealing with apostles and prophets, for conduct within the community, and for prayer, almsgiving and the whole of life.

This is an excellent commentary and a joy to use. It is now the standard work in English, although not sufficiently up to date to be the final word. The 1998 English translation is of the second German edition of 1993, itself a barely altered reprint of a 1989 original. A great deal of work has been published since then, but although most of it is included in the bibliography there is no interaction with it in the text of the commentary. Clayton Jefford, for example, has produced a monograph (1989) and edited an important collection of essays (1995). His name occurs five times in the index, but on each occasion the reference is to a footnote in which the series editor has noted the relevance of a contribution by Jefford or his collaborators to a point under discussion. This aside, this remains an excellent commentary.