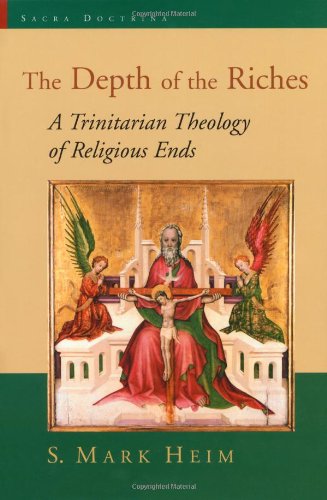 THE DEPTH OF THE RICHES: A TRINITARIAN THEOLOGY OF RELIGIOUS ENDS

This is an important and stimulating book, handling complex issues in a clear and attractive style. Mark Heim is a leading writer on Christianity and religious pluralism, and here we have his mature thinking on the subject. For this, if for no other reason, it deserves to be taken seriously.

He writes as ‘a convinced inclusivist’ (9), but clearly wishes to bridge the inclusivist/pluralist divide. Theologians have never engaged seriously with the question as to whether there may be more than one legitimate religious end. The distinctive Christian goal is salvation conceived as communion, but he holds that there are other legitimate ends, even, for instance, nirvana, to which Buddhism is the appropriate path. He says, ‘Religions are an integral part of God’s providential purpose, a reflection of God’s universal love’ (268).

He argues that, within a Trinitarian framework and a conviction that Christ is unique and that he alone can take us to salvation conceived as communion, the goals of other religions can be—even must be—accommodated. Because of the distinctiveness of the Christian goal, Christians may engage in evangelism, but other religions have much to teach us about other religious ends, for ‘Christ has a mission to the church out of and through the world religions’ (147).

In discussing the Trinity, he says, ‘there is no uniform divine substance or essence’. What there is one of in God is not a ‘stuff’ but a ‘communion’ (9). Communion being the essence of God, ‘distinctive religious ends sought and realised in other religious traditions are grounded in apprehension of and connection with specific dimensions of the divine life of the triune God’ (9). So the doctrine of the Trinity makes possible a theology of religions.

What then of life after death? There are not just two possible destinies, and in any case to him hell is not punitive but privative. He finds a model for the after-life in the complex eschatology of Dante’s Divine Comedy, and conceives of varied destinies, some closed but others open (somewhat after the fashion of Purgatory), for some people may still proceed ‘higher up and further in’. His thinking has clearly been greatly stimulated by Dante, but he also engages with the views of modern writers such as Panikkar, Ninian Smart, Konstantine and Zizioulas.

Has he made his case? I do not think so. He treats specific Scriptures seriously, but does not deal with the authority issue as such. Moreover, his use of the Bible is highly selective. For instance, he comments on Romans 2:12–16 but not on 1 Corinthians 10:18–22, one passage among many that present major problems for his thesis. His Christology is unsatisfactory. He says, for instance,

‘God and Jesus are one incarnate person, yet they are one person by communion, not by fusion into a third entity’ (56).

So, by avoiding Monophysitism, it seems he has embraced Nestorianism.

Some aspects of his presentation are argued carefully, but he makes some important statements without justifying them at all. For example, at one point he says, simply in brackets,‘all are God’s children’ (76). Some important conclusions he draws from his particular construction of the doctrine of the Trinity are highly questionable. To link Trinitarian diversity and religious pluralism, even in the sophisticated way he does, raises more problems than it solves Is it really true that ‘the Trinity is a map that finds room for, indeed requires, concrete truth in other religions’ (167)? One reader, at least remains quite unconvinced.