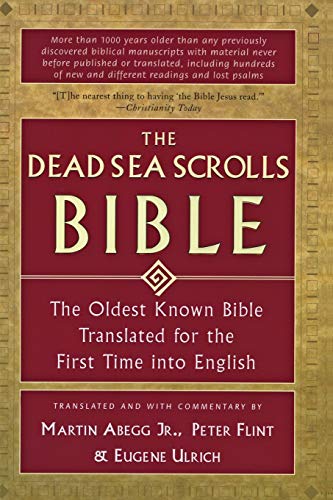 The ‘advance international claim’ which opens this book demonstrates that many leading Qumran scholars see it as tremendously important. And rightly so. We have been well served with translations of the non-biblical materials for a long time now—the many editions of Vermes, two from Martinez and that of Wise, Abegg and Cook. But this volume, by three world-renowned Qumran specialists, is the first to present a translation of all 225 biblical manuscripts from Qumran (plus twelve from Masada, Wadi Muraba’at, Nahal Hever and Wadi Seiyāl). The book is divided into ‘Torah’, ‘Prophets’ and ‘Other Books’. The authors also include Jubilees under ‘Torah’ and 1 Enoch under ‘Prophets’ because the Qumran community might well have given these two works canonical status (xvii), and Ben Sira, the Epistle of Jeremiah, and Tobit under ‘Other Books’.

The format is very simple, yet manages to convey a great deal of information. There is a brief introduction and a ‘How to Use this Book’ section, both very clear. Then comes the main section, the translations of the Qumran OT texts. At every stage the authors compare the Qumran text with the other three major manuscript groups, the Masoretic family, the Septuagint and the Samaritan Pentateuch. Every difference is italicised and footnotes give variant readings. Every few pages there is a brief discussion of particularly informative variations between the traditions, e.g. where the Qumran evidence solves an outstanding problem (e.g. 160 on Deut. 8:18; 312 on Is. 29:5). Each book has a brief introduction, discussing the most interesting variations and noting important citations in the non-biblical Qumran texts.

This volume shows that the biblical manuscripts from Qumran contain a few striking additions to the Masoretic text which might have a place in the OT as Scripture, e.g. short paragraphs at 1 Samuel 11:1 and Numbers 20:13. Another interesting matter is the very different order of the Qumran Psalter. In general, however, there is a striking similarity with the Masoretic text, considering that these Qumran texts are over a thousand years older. Nevertheless, for some books the Qumran manuscripts agree more closely in places with the Septuagint (e.g. Samuel, 214) and/or the Samaritan Pentateuch (Numbers, 126). The authors generally accept (against, say. L.H. Schiffman) that there was a considerable plurality of versions of the Biblical books in the intertestamental period (e.g. 260 on Samuel and Kings; 483 on Daniel). On the other hand, they note that by the second century AD the OT text had been standardised (4).

The introduction makes several important comments: e.g. that the best attested Biblical books from Qumran are Psalms, Deuteronomy and Isaiah, which are also the three most quoted in the NT (xvii). However, there are also some misleading points regarding canon. The authors claim that ‘lateness’ of composition and ‘unorthodoxy’ are not reasons for the exclusion of the apocryphal books from the Protestant canon. ‘The real reason … is more complicated’ (viii). But having said this, the authors then make a sweeping generalisation that ‘Early Christians accepted the Greek Septuagint, which contains these additional books’. There are serious problems with this kind of historical reconstruction when one considers how Paul and other NT authors are theologically opposed to concepts prominent in the apocryphal books. Some will also be unhappy with the judgements that the authors make on the dates of the manuscripts, since the ability to date copies from the style of script is contested by many.

Doubtless this book will instantly become a reference work, particular useful to anyone interested in the Qumran community and the textual history of the OT. Actually it will be essential for anyone engaged in research in biblical studies of any kind. Although it is already very big, a larger bibliography would have been appreciated: it extends to only three pages. Also there is no index: the book might have benefited from a list of all sizeable excerpts not found in the Masoretic text. But these are small quibbles, and the authors are to be commended for the production of what is an extremely useful tool for research.