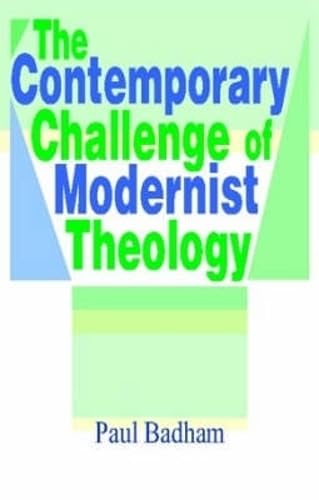 The Contemporary Challenge of Modernist Theology

Many believe that liberalism is, if not dead, just about given up the ghost. However in this work Paul Badham illustrates that liberalism still has a stronghold on many and for many theological students still presents a challenge.

The aim of the work is to show a middle path between traditional Christianity, and the radical interpretations of the likes of Don Cupitt. Thus modernist theology is classically liberal, in that it maintains a theistic belief whilst discarding much of what is seen as supernaturalism. The endorsements of the book by John Hick and Martyn Percy should give most readers a hint as to what to expect. Interestingly, his opponents include fundamentalists (and so evangelicals). Barthians, and Don Cupitt!

In the course of his exposition of modernist theology, Badham discards miracles, the doctrines of the atonement and hell, and the infallibility of the Bible. Whilst he is entirely at liberty to do so, it is slightly frustrating that he claims very few Christians now believe in such things. The fastest growing churches in the world admit to such beliefs, and it is therefore plainly wrong to make such claims. Not that the truth of such beliefs are confirmed by popular opinion. It Just seems that Badham is out of touch with worldwide Christianity.

Similarly, Badham claims that no scholar continues to believe that the messianic passages of the OT apply to Christ (25), or that ‘almost all modern Christians who will talk about the atonement agree with Barth’ and his reinterpretation (41). He also claims that most Christian physicists do not believe in supernatural miracles (74); that few modern scholars believe the words of John’s gospel (83); that the infancy narratives are unanimously agreed to be Jewish Midrash (84) … and the list could go on.

So there are two levels to engage with this work. Firstly, that Badham is arguing from false understandings of the way that things are. Secondly, that Badham is putting forward a liberalism for the new century which holds most of the beliefs of the old liberalism. The arguments are well known, and will not be rehearsed in this review. It is a shame that Badham seems to have paid little attention to the developments of the past 30 years—although he is up-to-date with scientific advantages and inter-religious dialogue, much more thinking has been carried out from other perspectives.

Ultimately this is a frustrating book. If you wish to know what modernist theology is, this is an excellent statement. Otherwise, for a living and life transforming theology that avoids generalisations, look elsewhere!