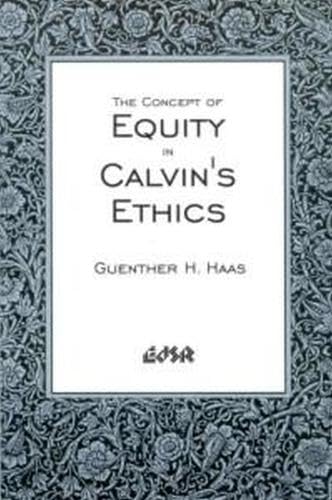 The Concept of Equity in Calvin’s Ethics

Calvin’s works are such a vast ocean that one is always grateful for clear guides that chart its reaches and trace its currents. The present work, which began life as a Toronto dissertation, lays out, in a mode more expository than analytical, when and how Calvin speaks of ‘equity’ in ethical contexts. The author’s conclusion is that this concept is ‘the theme of central importance in Calvin’s social ethic, in a similar way that union with Christ lies at the heart of his theology’, but I doubt if the book justifies the definite article in preference to the indefinite. This is partly because the edges of the concept remain somewhat fuzzy: is it to be discerned whenever Calvin uses the equivalent Latin or French noun (aequitas, equité), and only then, or in all uses of cognate forms also (e.g. the adjective aequus), or also in other vocabulary, such as the ius/iustitia family?

A survey of earlier discussions of the concept, from Aristotle to Aquinas, helpfully distinguishes four main understandings of equity: 1. The correction of positive law, especially when its generality is inadequate (Aristotle); 2. An interpretive principle of law in effecting justice (Roman, Stoics); 3. Natural law or right (the same, and Augustine); 4. Mitigation of law out of love or mercy (Augustine and Justinian). Haas finds all but the first in Calvin’s expositions of scriptural law, which illustrates the versatility of the concept in the Reformer’s works. Furthermore, I do not think Haas gives adequate weight to Calvin’s appeal to equity, in the third sense, to criticise some provisions of Pentateuchal legislation. He is aware of these instances, but seems reluctant to take their full measure, perhaps partly because they have implications for Calvin’s view of Scripture and show that the content of his notion of equity is, at least in part, non-biblically determined.

Less satisfactory is Haas’ survey of four Reformers ‘with whose teaching Calvin was familiar, and who had some influence of Calvin’s thought’—Zwingli, Bucer, Luther and Melanchthon. This is too vague, and actual dependence is not investigated, although Haas is surely right in general to look to classical-humanist inspiration. But a research project remains to be tackled on Calvin’s sources.

The central expository chapters are well organised and lucidly written, require no knowledge of original languages and focus heavily on biblical law. Brief looks at equity in state and in church and in connection with usury round off the book. Its strength lies in its balanced and careful systematic (no questions about development in Calvin’s thought) presentation of Calvin’s teaching. It is sympathetic without being uncritical. Haas detects incoherence in Calvin’s invoking ‘two types of equity’ to vindicate the twin decrees of election and reprobation. But what predominantly emerges here is Calvin’s versatility in deploying ‘equity’ to a variety of integrating, harmonising and sublimating ends in interpreting legal and ethical parts of Scripture.

The book is likely to interest students investigating Calvin on law, along with John Hesselink’s monograph.