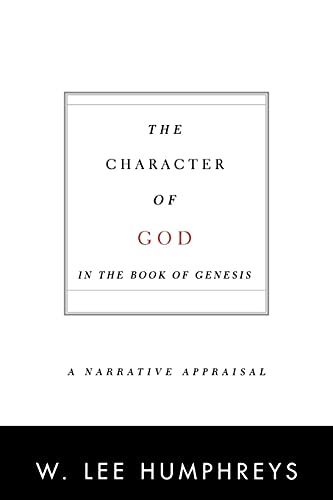 THE CHARACTER OF GOD IN THE BOOK OF GENESIS: A NARRATIVE APPRAISAL

A short introduction explains the book’s methodology: to appraise God as the central character who interacts with most of the other primary characters in the story world of Genesis. Humphries rearranges Robert Alter’s ‘scale of means’ for character appraisal into three pairs (in an ascending scale of value): (1) External descriptions and what other characters say; (2) Actions and speech; (3) Inner thoughts and the narrator’s evaluation. The role of the reader in constructing (generally subconsciously) a ‘paradigm of traits’ and the implications this has for Humphries’ own reading of Genesis is fully acknowledged. The character ‘God’ who thus emerges is more a construct of the reader who engages the text of Genesis than the Supreme Being to whom prayer and allegiance are offered and about whom theological textbooks are written. The influence of this ‘God’ character on contemporary readers is restricted to the power of the story.

The narrative appraisal begins by examining ‘God in the Story of the First Humans’. God’s activity as ‘sovereign designer’ (Gen. 1:1–2:4a) is juxtaposed with Yahweh. God’s role as ‘struggling parent’ (Gen. 2:4b–3:24) and ‘disciplining father’ (Gen. 4). For all the radical distinctiveness that he detects between the first (God as king) and second (God as parent), Humphries maintains that, like the two creation stories themselves, these two depictions of God should be held in tension. while this conclusion is certainly commendable, Humphries’ emphasis on the differences serves mainly to undermine it—especially so in his over-reading of the text to portray Yahweh God as someone whose knowledge, foresight and aptitude are certainly limited.

The following chapter, focusing on ‘God in the Story of the First Human Communities’, covers the rest of the primaeval narrative (Gen. 5–11), in which God is depicted as ‘the Destroyer and Sustainer’ (Gen. 5–9) and as ‘the Jealous God’ (Gen. 10–11). Once again, an over-reading prompts Humphries to envisage a God who is limited in knowledge, and whose power struggle with the humans he has created is reflected in his frustrated attempts to reassert sovereignty over them. Perhaps no other chapter more clearly exposes the danger inherent in Humphries’ approach: without the constraints of a biblical-theological framework, the depiction of God in Genesis will inevitably lead to a distorted image of God, most probably a God who is all too human in his actions and reactions.

The next five chapters are devoted to the patriarchal history. Humphries highlights several helpful insights into the plot’s development, as well as all the major characters it involves. However, there is a marked tendency to exploit every possible tension or ambiguity in the text, and to read more into what is said (or left unsaid) than is warranted. Consequently, the ‘God’ who emerges seems—to this reader, at least—rather less deserving of respect and worship than the God traditionally worshipped by Jews and Christians.

Each of the chapters concludes with a table setting out how God is characterised in the Genesis text covered thus far. While not unhelpful, it may have been more judicious to include only the full table (as an appendix) and make more reference to it at appropriate points in the main body of the discussion.

In a concluding chapter the various perspectives on the character God in Genesis are drawn together, to yield ‘a complex and at points conflicted character’ who ‘receives recognition of the sovereignty he first demonstrated in creation, but only as he is created in turn by his creations in images that serve their own designs for their lives’ (255–56).