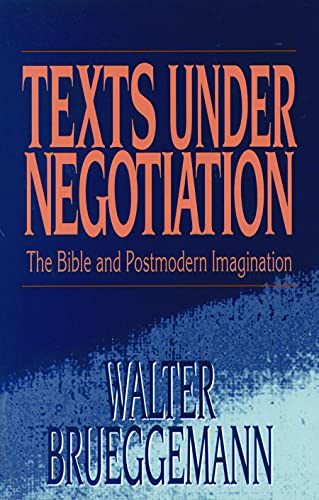 The Bible and Postmodern Imagination: Texts under Negotiation

This short but significant book, by one of the most stimulating of contemporary biblical theologians, is an invitation to Christians to do their biblical theology in a new way. Many Christians feel doubtful, if not straightforwardly hostile, about some of the wider changes in contemporary culture that are generally labelled as ‘postmodern’, for so often tire changes seem negative and undermining towards long-accepted truths. Brueggemann, by contrast, is positive towards the general trend, for he sees it as an opportunity for evangelical affirmation of the creative possibilities that are offered by God, the scriptural witness to which is too often dulled or silenced. Brueggemann affirms the central importance of imagination and lifestyle for appropriating this new reality, for what we know and how we live are inseparable. As ever, Brueggemann’s breadth of reading opens up whole areas of contemporary debate about which most biblical scholars may be poorly informed. There is a freshness and vitality here that must be read to be appreciated.

Despite tire obvious value of the book, however, there is much that strikes me as one-sided and insufficiently thought through. The easy rhetoric against ‘white, male, Western, colonial hegemony’ is more likely to polarize than to persuade. The corresponding dismissal of concern about ‘political correctness’ as ‘almost exclusively a conservative reactionary device to fend off criticism and change’ is simply tendentious, given the lack of careful attention to the question of criteria whereby movements and changes can be assessed as better or worse. And although Brueggemann cheerfully asserts that one can no longer tell a ‘big story’ and must rather tell specific local ones, I doubt that the situation is so simple (and it is odd that Jewish modes of particular and ‘irrational’ readings of texts are extolled while a Christian concern for catholicity is ignored). It is all very well to try to enable the biblical text to speak in a fresh way ‘without too much worry about making it palatable either to religious orthodoxy or to critical rationality’. But the fact that the six texts chosen ‘almost at random’ by Brueggemann to illustrate his thesis not only ‘challenge our commonly assumed world’ but also do so in a way congenial to a left-wing socio-political consciousness may make one wonder whether there may not yet be some (undeclared and unscrutinized) big story that is significantly guiding the use of the biblical text.

Nonetheless, despite considerable reservations, the issues that Brueggemann raises are crucial for the future of theology, and must be seriously engaged with. It would be a supreme irony if conservative scholars, after so long resisting the influence of the Enlightenment on biblical studies, should finally have so accepted much of that Enlightenment agenda that when a Christian scholar proposes abandoning that agenda they defend it as though they were defending the faith.