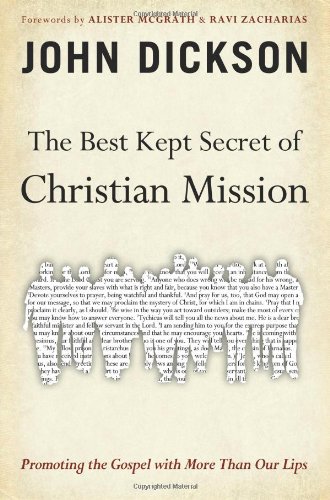 The Best Kept Secret of Christian Mission: Promoting the Gospel with More Than Our Lips

The best-kept secret of Christian mission, according to John Dickson, is that “the Bible lists a whole range of activities that promote Christ to the world and draw others toward him” (p. 22). To underscore his thesis, Dickson emphasizes two common errors in understanding the Bible’s teaching on mission. First, Christians have often thought of mission as limited to verbal proclamation of the gospel (“evangelism”) without sufficiently emphasizing the diverse activities Scripture connects to the task of mission. Second, there is often a failure to distinguish the general responsibility the Bible gives to all believers from the special responsibility given to a subset of believers with the calling of “evangelist.” For Dickson, these errors lead to some Christians being wrongly pressured to act as evangelists, though they may not be called and gifted for this role. As a result, such believers may lack the joy they should take in mission and neglect the ways they should be involved in mission.

Dickson attempts to unlock this secret by describing six specific ways the Bible calls all believers to be involved in mission: promoting the gospel (1) with prayers, (2) with money, (3) through the works of the church, (4) through Christian behavior, (5) through public praise, and (6) in daily conversations. Each of these activities receives a chapter wherein Dickson carefully explains how Scripture explicitly links the activity to the gospel’s advance and personal conversion. Readers are encouraged to see these activities not as peripheral to Christian mission, but the heart of it—thus applying their hearts for mission in these various ways.

The six chapters on ways to promote the gospel comprise about half the content of the book. Remaining chapters (interspersed throughout the book) introduce, conclude, and support the book’s main idea by focusing on related issues. They discuss subjects like reasons for involvement in mission, the challenge of pluralism, the content of the gospel, and the role of the evangelist. A closing parable effectively demonstrates how a community of believers practicing biblical principles highlighted in this book might come together to influence unbelievers toward Christ.

A spate of books have been released on the subject of mission in recent years, and it is appropriate to ask where Dickson’s book fits among them. Unlike many volumes written about mission, Dickson is not writing for an audience of pastors, church planters, or biblical scholars (though all would likely benefit from reading the book), and thus his focus is not on interacting with other literature on the subject. Instead, his intended audience seems to be believers in general, and his focus is on interaction with the biblical text, especially the gospels and Pauline epistles, seeking to show what Scripture says about mission for all Christians. Though Dickson never uses the word “missional,” his message is essentially that all Christians ought to live missionally in the sense of living the whole of their lives with a commitment to God’s mission.

This book implicitly wades into the waters of “mission as evangelism” vs. “mission as social action.” Both sides of that debate might find reason to criticize Dickson. Emphases on good works and Christian behavior might dismay some who rigorously hold to evangelism’s priority, but his identification of “promoting the gospel” as the goal of those activities might be too narrow for the social justice crowd. Likely, both camps could benefit from reflection on the passages Dickson brings to the forefront.

Like any book, this one is open to criticism. While calling all believers to be deliberately faithful to mission, the lack of emphasis on the Great Commission (Matt 28:18–20) and Jesus’ other final commissions (e.g. John 20:21; Luke 24:46–49; Acts 1:8) is conspicuous. The omission is explained on page 34, where Dickson makes passing mention of his belief (which he acknowledges as controversial) that only the “broad thrust” but not the specifics of the Great Commission apply to all followers of Jesus. But this position is not essential to the central argument in the book. In fact, if the Great Commission applies to all believers, this actually strengthens Dickson’s argument about the importance of all believers diligently promoting the gospel in a variety of ways.

Another potential criticism has to do with the book’s organization. Dickson’s understanding of the distinction between all believers and the specific role of “evangelist” is foundational to his argument. However, this distinction goes undeveloped until chapters 9 and 11. Much of the earlier material, especially on different ways of promoting the gospel, could be strengthened had these later ideas been introduced earlier.

As a whole, this is a valuable book that should be widely read. As a pastor, I’ve often struggled to recommend a book providing a good introduction to mission. Many books focus on evangelism and can be helpful as far as they go, but fail to communicate that the mission of a believer is more comprehensive than specific opportunities to verbally share the gospel. Other books do a marvelous job of expounding missiological strategy or a biblical theology of mission, but are too technical for most non-scholars. I’ve hoped for a book that would help church members see that mission is not simply a ministry of the church, but the pursuit of their whole lives; that verbal proclamation of the gospel is essential but is not the entirety of mission—in other words, a book teaching a biblical view of mission.

At last, I have found The Best Kept Secret of Christian Mission teaches a biblical view of mission in a manner accessible to anyone in the church I am privileged to serve. I am thankful for the way Dickson combines exegetical and historical depth with the engaging tone of a pastor and evangelist. Scripture is handled well, being exposited and illustrated in ways that allow it to speak for itself. This is now the first book I would recommend to a believer seeking to understand what it means to live with a mission, and any pastor or Christian leader would do well to buy it, read it, and reflect on it.