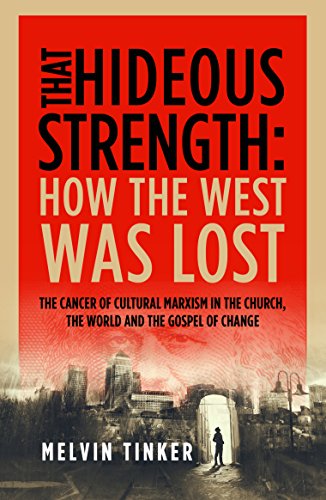 That Hideous Strength: How the West Was Lost: The Cancer of Cultural Marxism in the Church, the World and the Gospel of Change

Melvin Tinker’s That Hideous Strength: How the West was Lost is a clever little book. I say “little” because it is not much more than 100 pages in length. This not only makes it a quick read but, as it’s been well-written by a pastor-preacher with an eye to his flock, an easy read too. I say “clever” because, despite its brevity and accessibility, the book not only covers a wide sweep of complex terrain but also provides a deep and penetrating analysis of how the west was (or is being) lost, as well as a timely admonition to Christians to heed their master’s call “to stand against the world in order to win the world” (p. 21). In terms of both purpose and approach, Daniel Strange (who authored the book’s Forward) helpfully describes it as “a creative exercise of looking at the world through the Word and focusing on an ideology at war with God and his life-giving blueprint for life” (p. 14).

As lovers of C. S. Lewis’s writings will be aware, Tinker’s main title is borrowed from the third book in Lewis’s space trilogy—That Hideous Strength, first published in 1945. (Interestingly, Lewis’s title was itself drawn from a line in a sixteenth century poem by Sir David Lyndsay which described the Tower of Babel as follows: “The shadow of that hideous strength / Six mile and more it is of length.”) Tinker’s first chapter is, therefore, given over to an exposition and application of Lewis’s book, in order to help us see “the way a new totalitarianism is being introduced into Western society and the way the church has colluded with it” (p. 20).

But Tinker’s deeper concern is that we learn the lessons embedded in the incident that gave rise to Lindsay’s lines—the Tower of Babel itself. This is the burden of chapter 2. For Tinker, the Babel episode functions “as a parabolic lens through which we can view and come to understand what has been happening in our society and how it may be countered by the Gospel of Jesus Christ” (p. 34). Moreover, it illustrates three related ways in which human beings try to unmake and remake the cosmos: communalism (i.e., solidarity in rebellion), constructionism (i.e., the attempt to de-god God) and connectivity (i.e., unity in language and action). The net effect is “a blasphemous human ‘let us’ over and against the Holy ‘let us’ of the Triune God” (p. 43).

In chapter 3, Tinker turns to an exposé of “neo-Marxism, sometimes called cultural Marxism or libertarian Marxism” (p. 45), which he defines (care of the Marxist philosopher, Sidney Hook) as a “philosophy of human liberation” which seeks to “emancipate man from repressive social institutions, especially economic institutions that frustrate his true nature … so that he can overcome his estrangements and express his true essence through creative freedom” (pp. 45–46). He first takes us back to the Italian Marxist, Antonio Gramsci, and the importance of his idea of cultural “hegemony.” He then turns to the Critical Theory of the Frankfurt School, paying particular attention to writings of Herbert Marcuse—notably, Eros and Civilization (1955) and “Repressive Tolerance” (1965).

Tinker’s interest in Eros and Civilization is due to the fact that it fuses “neo-Marxism with a version of neo-Freudianism in order to turn the power of the libido into a revolutionary force” (p. 53). Marcuse thus called for “the throwing off of all traditional values and sexual restraints in favour of ‘polymorphous perversity’” (p. 53). Tinker’s interest in “Repressive Tolerance” is due to the fact that the kind of tolerance Marcuse advocates “cannot be indiscriminate and equal with respect to the contents of expression, neither in word nor in deed; it cannot protect false words and wrong deeds which demonstrate that they contradict and counteract the possibilities of liberation” (cited on p. 49). The net result is “a new totalitarian-tolerance” (which is, in fact, profoundly intolerant) and “the all-pervading political correctness of our age” (p. 49).

This naturally leads Tinker to a consideration of “The Gender Agenda” (chapter 4). He begins by outlining the strategic plan articulated in Marshall Kirk and Hunter Madsen’s After the Ball: How America Will Conquer its Fear and Hatred of Gays in the 90s (New York: Doubleday, 1989), noting the speed and success with which it has been implemented, and the radical revolution in societal attitudes that has been the result. He then draws attention to the way in which “the main cultural transformers have been brought to bear to achieve this revolution” (p. 67)—e.g., advertising, TV series, social media. As to the latter, he notes that “the revolution has become much easier with a lynch mob mentality being able to be whipped up with ease via Facebook, Twitter and the like” (p. 71). All of this is in the service of the larger neo-Marxist agenda—to create not merely a classless society but one in which all creational differences are erased, including gender.

However, there are two related institutions that stand in the way of the full flowering of this prospect: the family and the church. Will they be able to provide the resistance necessary? This is the question that drives chapters 5 and 6. As Tinker sees it, “the end game of the neo-Marxist agenda is the destruction of the family” (p. 73). For those who doubt it, Marcuse is explicit on the point. The “polymorphous sexuality” he promotes “would lead to a disintegration of the institutions in which the private interpersonal relations have been reorganized, particularly the monogamic and patriarchal family” (cited on p. 73). But Tinker’s greater concern is with the way in which the church has colluded with this agenda and “increasingly adds its own confused voice to the confusing voices of the Babel culture in which it finds itself” (pp. 83–84).

Is it then too late for the church? And, if not, what needs to be done? This is question of chapter 6. To answer it, Tinker takes us back to the account of the Tower of Babel. The good news of Babel is that “despite humankind’s attempt to redefine and reconfigure reality—to ‘de-god God’—it is God in his glorious omnipotence and infinite wisdom who remains Lord. He subverts all our attempts to subvert, and his great reality, which lies behind all realities, will win out” (p. 91). How then should the church respond to the challenge of that “hideous strength” in its current cultural Marxist form? Tinker’s advice is threefold: by faithfully commending God’s truth, by gospel-centered cultural engagement, and by courageous refusal and refutation. (Those who want to know how Tinker expounds each of these points will just have to buy the book!)

On the final page, Tinker takes us back to Lewis’s novel and reminds those who know it that final victory was accomplished not by clever human maneuvering or a powerful human leader but (as in the case of Babel) “by a special intervention of God” (p. 117). Therefore, it is for this, above all, that he urges us to pray today.

Some readers may question either the validity or helpfulness of invoking the specter of cultural Marxism, particularly as it is a contested category in the minds of some and has been employed in a highly conspiratorial fashion by others (Anders Breivik’s Manifesto comes to mind). Nevertheless, in my view, Tinker’s use of the category is more than defensible, and the links and parallels he draws between various twentieth century neo-Marxists proposals and a range of current cultural and political phenomena is difficult to deny.

Is That Hideous Strength beyond criticism then? Not quite. I, for one, would have welcomed footnotes, endnotes or some other way of discovering on what page(s) of the various “Works Cited” (which are helpfully listed at the end) the book’s many citations may be found. It also contains the odd misnomer (e.g., “Sex in the City” should be “Sex and the City,” p. 67), typo (e.g., “sapientail” should be “sapiential,” p. 96) and mis-spelling (e.g., “Guiness” should be “Guinness,” p. 117). But these are minor blemishes, which in no way detract from the book’s force and clarity. Tinker’s That Hideous Strength thus deserves the many strong commendations it has received and will greatly benefit all who read (and indeed, re-read) it.