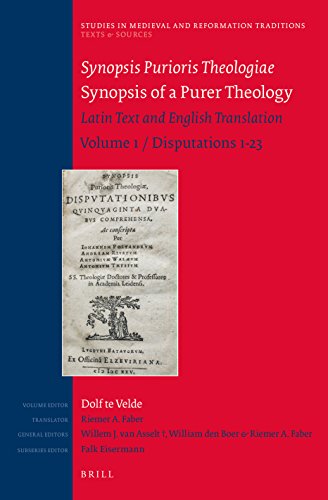 This Latin-English edition of the Synopsis of a Purer Theology makes available for the first time in English one of the seminal works of seventeenth century Reformed Scholastic theology. As the editor notes, this work was the standard handbook for students of Reformed theology in the seventeenth century Netherlands. It was published five times throughout the course of the seventeenth century (1625, 1632, 1642, 1652, and 1658), and once in the nineteenth century (pp. 1, 17). Readers will be intrigued to know that the final nineteenth century edition was actually edited by Herman Bavinck in 1881. Bavinck’s own work, Reformed Dogmatics, was recently translated into English over four volumes, and has become one of the standard systematic theological textbooks in Reformed seminaries. Bavinck’s editor, John Bolt, points out that Bavinck frequently cited the Synopsis and firmly planted himself in the historic Dutch Reformed tradition (Herman Bavinck, Reformed Dogmatics, Volume 1: Prolegomena, ed. John T. Bolt, trans. John Vriend [Grand Rapids: Baker Academic, 2003], p. 11). Therefore, readers of Bavinck’s systematic theology would do well to follow his example and drink deeply from Bavinck’s own theological fount as they engage with his Reformed Dogmatics.

This first of three projected volumes contains the first twenty-three of the Synopsis’s fifty-two disputations—with the remaining volumes slated for publication in the next few years (pp. xii, 5). These disputations are preceded by an excellent introduction by the work’s editor, Dolf de Velde, who provides not only an overview of the contexts of the work, but a window into the work’s historical and theological context. This section will be an invaluable resource to any who are unfamiliar with post-Reformation scholastic disputation. For example, there we learn that the Synopsis was actually the result of a full cycle of faculty disputations that took place between 1620 and 1624 at Leiden University, and, consequently, sometimes called the Leiden Synopsis (p. 1). The four contributing professors—Johannes Polyander (1568–1646), Antonius Walaeus (1572–1639), Antonius Thysius (1565–1640), and Andreas Rivetus (1573–1651)—each took turns constructing doctrinal treatises that were used to instruct students in their “thinking power and skill in debate and discussion, and to help them digest what they learned” (p. 4). Even though each author composed his disputation independently, the work has a significant measure of theological unity, as was a deliberate intention of the authors (p. 27).

Turning to the disputations themselves, rather than giving a point-by-point summary of these theses—something the introduction does quite well—readers will be better served by looking to some high points of the treatise. Perhaps the most striking feature of these disputations is that they are saturated with Bible references. The authors were committed to the primacy of Scripture and this volume begins and ends with a treatment of the importance of the Word of God (disputations 1, 18–23). Another prominent feature of the work is the authors’ dependence on the writings of earlier Reformed theologians. For example, Polyander’s treatment of archetypal and ectypal theology (p. 33) bears a striking resemblance to Franciscus Junius’s formulations in theses 6–9 of his 1594 work A Treatise on True Theology, which was translated into English just this past year. Similarly, as the footnotes demonstrate, Thysius’s superb treatment of the divine incommunicable attributes—the simplicity, immutability, infinity, eternity, and immensity of God—in disputation 6 accords with the Italian Reformer Girolamo Zanchi’s earlier work (pp. 165–69, especially p. 165). Likewise, Thysius’s exposition of the self-authenticating quality of Scripture in disputation 3 is analogous to John Calvin’s classic treatment of the subject (Institutes 1.7.5). These features serve to confirm Richard Muller’s influential thesis that there was a congruency of thought between Calvin and later Calvinists. The authors also acknowledge their dependence on a number of early church theologians, especially Augustine. For example, Augustine’s influence is apparent in Rivetus’s disputation “On Original Sin” (p. 373), and Thysius’s treatment of the four states of humanity. And the latter’s exposition is analogous to our contemporary notions of creation, fall, redemption, and restoration (pp. 15–16, 416–31).

Riemer A. Faber’s translation of the Latin original is lucid and promotes the four authors’ collective goal of preserving a unified voice. Faber’s translation not only makes the work accessible to English readers, but the appended glossary of particularly important Latin terms allows non-Latinists to understand the scholastic theological terminology of the original text (p. 19). The footnotes display the editor’s impressive breadth of scholarship, and allow the reader’s to link the primary text with the historical and theological context. A careful reading of the footnotes reveals the extent to which the authors of the Synopsis are responding to contemporary Roman Catholic, Anabaptist, Libertine, Socinian, and Spiritualist challenges to Reformed Orthodoxy in the seventeenth century (p. 2). For example, the authors defend biblical truth from Socinianism’s attacks on orthodox understandings of the Trinity and the sufficiency of Scripture, and Catholic views regarding the authority of extra-biblical church traditions posited by the influential Jesuit theologian Robert Bellarmine (1542–1621) (pp. 201, 209). Finally, since the disputations were crafted in the wake of the quarrels in the Netherlands that culminated in the Synod of Dort in 1618–1619, an indirect aim of this work was to defend Reformed Orthodoxy from the encroachments of Arminianism. Of course, this is a crucial reminder that theological study must not be divorced from its historical context.

This volume will likely take its place on the shelf of those who are eager to study Reformed Scholastic theology in its original historical context. Most importantly, it allows contemporary readers to access the treasure throve of Reformed thought in the seventeenth century (much of which is still only available in Latin), without having to do all the “heavy lifting” of translation. Further, having a well-edited critical edition of this important primary text will permit readers to more easily trace the networks of Reformed thought across generational and geographical lines. Of course, one setback of the work is that it is extremely expensive. Although readers at some academic institutions will have electronic access to the book via BrillOnline, perhaps the publisher will eventually make this excellent resource available to a wider readership. We should expect that the two subsequent volumes will display the same high level of scholarship exhibited throughout this first edition, and that this volume (and eventually set) will be an invaluable resource to all who are interested in seventeenth-century Reformed Scholastic theology and history.