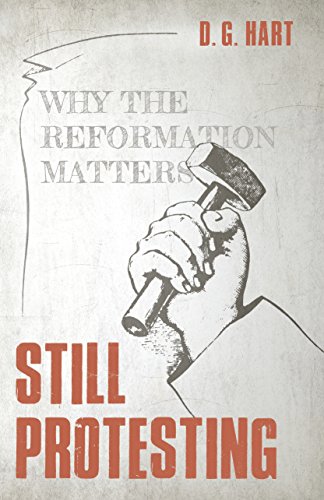 Still Protesting: Why the Reformation Matters

Can Protestants and Roman Catholics be allies in the culture wars being waged against the Christian faith and values? This is the question that the historic seminar of “Evangelicals and Catholics Together” gathered to address in the spring of 1994. Leading scholars signed and published a statement that explained the need and “responsibility for Evangelicals and Catholics to be Christians together in a way that helps prepare the world for the coming” of Christ. The advancement of ecumenicism has grown even stronger today, as evidenced in the dramatic decrease of Christians who identified as Protestant in a 2017 Barna poll. In response, D. G. Hart seeks to remind readers of “the enduring strengths of historic Protestantism” and the vital need to recover its teachings, arguing that “debates that divided the two sides of Western Christianity still matter” (p. xiii).

This book stands as a defense of Reformed Protestantism and its teachings on salvation, worship, and the institutional church, in the current context where an increasing number of Protestants are converting to Roman Catholicism. Hart contends that the gulf between the two cannot be bridged if one truly cares about “the holiness of God, the demands of His law, human sinfulness, and the reality of eternal punishment for disobeying Him.” (pp. xii–xiii). In this well-written and at times biting work, Hart unapologetically calls Protestants to stand against Rome’s teachings by holding fast to the historic Protestant biblical teachings, particularly the sufficiency of Christ for salvation.

Published shortly after the 500th anniversary of the Reformation, this book is a timely addition to the corpus of works written on Protestant/Catholic relations in the twenty-first century, which include Christian Smith’s How to Go from Being a Good Evangelical to a Committed Catholic in Ninety-Five Difficult Steps (Eugene, OR: Wipf & Stock, 2011) and Mark Noll and Carolyn Nystrom’s Is the Reformation Over? An Evangelical Assessment of Contemporary Roman Catholicism (Grand Rapids: Baker Academic, 2008). In contrast to these works, however, this volume sets out to support historic Protestantism’s relevance for today. Hart is an elder in the Orthodox Presbyterian Church and Distinguished Associate Professor of History at Hillsdale College, and has authored important works on church history and the Reformation tradition, including Calvinism: A History (New Haven: Yale University Press, 2013). In this work, the former dean of academic affairs at Westminster Seminary in California lives up to Barton Swaim’s characterization of him as “a cantankerous conservative, a stalwart Presbyterian and a talented polemicist with a delightfully perverse sense of humor” (“The Eating of Sausages,” Wall Street Journal, 19 August 2013, https://www.wsj.com/articles/the-eating-of-sausages-1376947602).

In this concise work of 207 pages that includes a helpful index, Hart utilizes Reformed and Catholic documents and reputable secondary sources to make his case for the enduring relevance of historic Protestantism. The introduction opens by positing that the arguments of scholars such as Christian Smith “are not sufficient to overcome the enormous problems in Roman Catholicism” (p. 7). Chapters one through five examine significant aspects of the Reformation including the reason for the Reformation, the authority of Scripture, the doctrine of justification by faith alone, the reforming of church governance, and the doctrine of vocation. In the second half of the book (chs. 6–10), Hart defends Protestantism against major Catholic objections including its newness and divisions, its lack of aesthetics, and its agency of the woes of modernity and liberalism.

This volume is a particularly helpful resource for Protestants considering Catholicism. Chapter three and the conclusion serve as a powerful call to continue to stand firm in the Protestant tradition for the sufficiency of Christ. Hart persuasively demonstrates that “the gospel, truthfulness of Scripture, and danger of idolatry are still as much at stake in Roman Catholicism as they were at the time of the Reformation” (p. 195). Another highlight of the book is chapter five, “Vocation: Spirituality for Ordinary Life.” As Hart adeptly shows, the Protestant doctrine of vocation resolved the daily tension ordinary believers felt regarding holy activities and common ones, enabling everyone to “serve God and love their neighbor in regular activities” (p. 84). Hart helps the reader recognize the spiritual value of worldly vocations and the application of salvation to all areas of life.

In Still Protesting, Hart evidences his reformed perspective by focusing on the flaws of Roman Catholicism, building his defense of Protestantism primarily on the defects of Catholicism. The author offers an excellent reminder of the enduring theological truths of historic Protestantism. He, however, shies away from acknowledging some of its missteps, tending to see it through rose-colored lenses. While a concise book such as this cannot cover every issue that has divided Protestants and Catholics, it is surprising that Hart does not give a more extended treatment to the key theological concerns of papal infallibility and the sacraments, particularly transubstantiation. It is also interesting that Hart, being trained as a historian, relies heavily on secondary sources, including Thomas Bokenkotter, Brian Kelly and Mark Noll, to explain the historical and theological context. Yet, this is appropriate for a book aimed more at the layperson than the academy. Hart’s words can be biting at times. For example, calling contemporary Roman Catholicism “incoherent if not schizophrenic” (p. 165) may cause some readers to dismiss him. In this, Hart has taken to heart not only Luther’s theological views but also his polemical voice. This tone may best serve a Protestant audience already convinced that Rome “erred about the things of God” (p. 196).