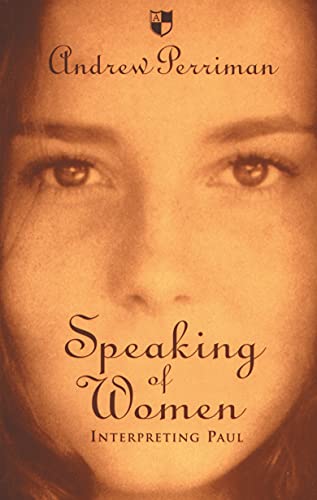 Many evangelical works have been published recently arguing that women can fulfil every ministry in the church, and that husbands do not have a unique leadership role. Andrew Perriman advocates this position but jettisons many popular egalitarian arguments. He denies for example that the word kephale means source and that Ephesians 5:21ff. calls for ‘mutual’ submission. He does not believe that 1 Corinthians 14:33b–35 is a non-Pauline interpolation, or a quotation from the Corinthian church that Paul is contradicting. He does not believe that authenteo in 1 Timothy 2:12 means to instigate violence, or to misuse authority nor doe he believe that the prohibition in 1 Timothy 2:12 is given primarily because women at Ephesus were teaching false doctrine.

Perriman’s thesis is altogether simpler. Paul called for wives to submit to their husbands; he called for the women in Corinth to be silent in the public meetings of the church (except when they were standing, with heads covered, to pray or prophesy); he prohibited the women at Ephesus from teaching in the assembly. Paul was being consistent with the patriarchal culture of the day: he wished to avoid both the confrontation between Jewish and Gentile believers and the needless offence to outsiders. In accepting all this, Perriman refrains from hermeneutical gymnastics that leap over the ‘plain sense’ of the text. Instead he argues that the patriarchal culture of Paul’s day was a temporary condition. He provides an exegesis of the Pauline texts which, he claims, indicates that ‘at the back of Paul’s mind’ was the possibility of a world in which the stain of patriarchy had been washed away. Male leadership was inevitable in the New Testament age. Paul regulated it, ameliorating it as far possible by exhorting husbands to love their wives as Christ loved the Church. But society accords equal rights to women now, and it is only appropriate that the church follow suit. If we lag behind the Church may well languish as an irrelevant anachronism.

The overall argument is clear. But what about the detailed exegesis? With regard to 1 Corinthians 11:3, the passage has to do with propriety in worship, not authority, says Perriman. But can it not relate to both? With regard to the word kephale (1 Cor. 11:3, Eph. 5:23) Perriman argues at length that it does not have connotations of authority: it signifies prominence or pre-eminence. But he fails to prove that the persons referred to, as kephale. had no authority. The fields of meaning overlap. Perriman’s case has already been broadly made by Richard Cervin, and refuted by Wayne Grudem in the appendix of Recovering Biblical Manhood and Womanhood (1991, 425–49), The weakest section is on Ephesians 5:21–24, ‘No inference, therefore about the logical status or the character of the man’s headship is drawn directly from the headship of Christ’ (56). But this statement is only possible because at this point Perriman ignores verses 25–33. The section on 1 Timothy 2:12ff. is also problematic. Paul seems to be saying that the prohibition is based on creation. Perriman argues that verse 12 is a parenthesis, so that the prohibition against women teaching is not creationally mandated—just a necessary response to the prevailing local conditions. The brackets are vital to the argument, but stubbornly hypothetical.

So with regard to both marriage and ministry, ‘Paul regards the authority of the man over the woman not as a theological absolute but as a given cultural reality’ (204). We should not preserve an outdated (patriarchal) pattern of leadership that will prove a stumbling point in the modern world. In marriage, we can speak ‘either of a joint headship or of a division of headship, depending on how responsibilities are apportioned within marriage’ (209–10). The husband does not ‘have to feel that he must take ultimateresponsibility’ (210). The modern world has moved beyond a hierarchical understanding of gender. Perriman suggests that Paul, if alive today, would have welcomed this. But the world has also moved beyond respect for any authority whatever. Do we then accommodate to that and reject all authority structures?

This book is a persuasive and consistent argument for egalitarianism. although egalitarians may not welcome the rejection of several cherished interpretations. Does it succeed? Perriman does not attempt to evaluate the ‘practical experiments in egalitarianism’ that have taken place in family and church (11) although he says such a task is necessary. He fails in the dual aim of taking on board the concerns of the complementarians (11) and arbitrating between the two sides (11). This is because he equates submission with being dominated; and in rightly rejecting a ‘chain-of-command’ type marriage he goes straight over to the roleless marriage (the logical fallacy of the excluded middle: there is a complementarian middle way!) He treats male leadership as something negative: but complementarians—including women—view it positively. On the Titanic nine men died for every one woman, because the husbands gave their lives for their wives and children. Was that the ‘stain’ of ‘outdated patriarchy’? Or was it an illustration of Christ-like servant leadership: being willing to take ultimate responsibility but also to make the ultimate sacrifice?