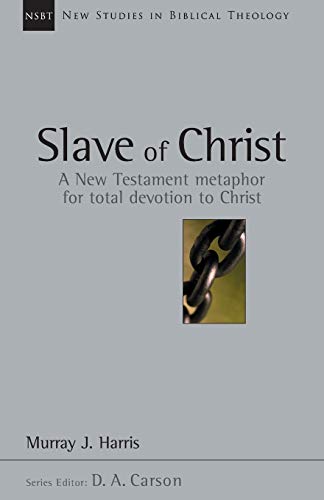 Slave of Christ, A New Testament Metaphor for Total Devotion to Christ (NSBT No 8)

Professor Harris, an eminent NT exegete, has written a lucid account of the NT concept of slavery as it relates to those who chose to follow Christ. Whilst not a terribly endearing title, the book provides a comprehensive study of the importance of the spiritual implications of being a ‘slave to Christ’. It begins with an apologetic concerning the translation of the Greek doulos, (lit., slave) which in most English translations of the NT is rendered servant. Harris argues that as a result, the positive metaphor of slavery has been lost. It is at this point that those with an acute sense for justice of oppressed people might be tempted to dismiss the book as offensive in its suggestion that there be anything good about slavery. The book has to be read as a whole and is not intended as a ‘dip in’ theological reference book on the exegesis of terms based on the doul– stem.

The first section of the book deals with the literal and physical aspects of slavery, as it was in first-century CE Mediterranean societies. The latter section concerns the way the NT uses the metaphor to relate to the believer’s spiritual freedom and includes themes such as lordship, ownership and privilege in the context of devotion to Christ.

The subject is highly emotive and Harris tries sensitively to argue for a return to a Biblical and cultural understanding of doulos. He is emphatic that slave imagery cannot be eradicated from the NT as it formed part of normal culture in the Graeco-Roman and Near Eastern societies. The problem, as Harris himself concedes, is that the overriding image of slavery is abhorrent to most people where the general impression is that of enforced obedience, loss of freedom, and cringing subservience.

Overall the book is written very well. Readers seeking to study in-depth should have to hand a NT, preferably a parallel Greek/English text version. There are occasions when the arguments appear weak to support the author’s thesis. For example, the suggestion that an author is writing about the positive notion of slavery in the minds of NT converts is at best presumed, and is only qualified by such phrases like: ‘there is no reason to believe otherwise’. However it is imperative to read the book as a whole. Reading exclusively the sections that highlight the negative view of slavery in relation to Israel’s slavery in Egypt or comments concerning the believers status as ‘no longer being slaves’ (John 15:15 and Gal. 4:7) is bound to be misleading.

Harris surprisingly does not conclude that English translations should render doulos as ‘slave’, as E.J. Goodspeed and the NRSV translations do. Instead consistent exegetical and hermeneutical principles should be applied to the proper understanding of the relevant Pauline and Petrine passages. For example, the paradox of positive slavery is not so much focussed on the individual, but on the master. Christ himself in respect of his total devotion to his Father in heaven. Any abject submission to a master, born of fear, is not a reflection of a NT-based Christian doctrine.

Harris wants readers of his book to understand that being a disciple of Christ does not mean having individual autonomy, but means, having been bought at a price, belonging to Christ—who is both master and friend. This book will be appealing to theological students. The comprehensive index and bibliography affords further study that students beginning biblical exegesis will find most helpful. The underlying devotional emphasis means that the book will also be a valuable resource for churches too.