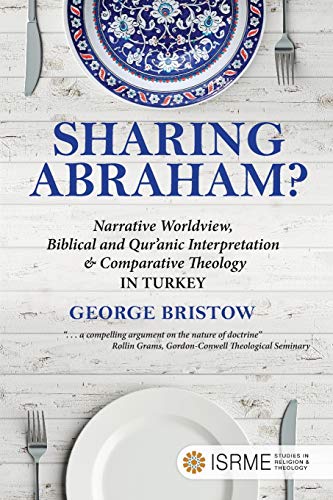 Sharing Abraham? is the published version of George Bristow’s well-written Ph.D. dissertation accepted by Vrije Universiteit Amsterdam. Bristow demonstrates competence in both Old and New Testament. The dissertation also bears witness to his mastery of Islamic studies and Turkish culture, though I am less qualified to evaluate his competence in these areas.

Bristow’s purpose is to lay “groundwork” for and explore “the possibilities of employing the biblical and Islamic Abraham stories for interfaith encounter and Christian witness in Turkey” (p. 1). This subject was worth exploration because Abraham is important for the narratives and worldviews that undergird both Christianity and Islam. Furthermore, Abraham has special significance in Turkish tradition. Bristow approaches this subject within the context of the overarching narratives presented by both the Bible and the Qur’an.

Chapters 1–2 set the stage for what follows. First, Bristow evaluates various groups who advocate “Abrahamic Dialogue.” Using such dialogue to blur the sharp differences between the Christian and Islamic worldviews is neither accurate nor ethical. If both sides are true to their respective faiths, they must allow for persuasion.

A careful analysis of the Islamic and Christian worldviews highlights sharp differences across three polarities: (1) Creation-Fall/Tawhid, (2) Redemption/Prophethood, and (3) Consummation/Afterlife.

First, Creation-Fall/Tawhid. The complexity and a condescension of the God of the Bible is contrary to the Islamic doctrine of the absolute oneness of God (Tawhid). Allah does not enter his creation. Furthermore, the biblical fall brings a radical disruption of God’s creation that requires redemption. The sin of the qur’anic Adam requires right guidance to counter forgetfulness.

The second polarity, Redemption/Prophethood, corresponds to the above understanding of evil. In the Bible, God comes into the world to provide a salvation through one people, the children of Abraham. His coming culminates in Christ and provides redemption for the world. In the Qur’an, God sends prophets to various peoples with “right guidance.” Muhammad brings this same “right guidance” for all.

The third polarity, “Consummation/Afterlife,” flows from the second. Both the Bible and Qur’an affirm bodily resurrection and eternal bliss or punishment. In the Bible, however, at the “consummation” of the history of redemption, God demonstrates his faithfulness by returning and establishing a new heaven and earth free from evil. According to the Qur’an, the final judgment fulfills the prophetic word whereby those whose good works outweigh their evil deeds go to God in paradise; others are cast into hell. The biblical emphasis on God’s dwelling among his people in a new creation is distinct.

This analysis of competing worldviews provides a framework to compare the accounts of Abraham in the Bible and the Qur’an. In chapters 3–4, Bristow analyzes Abraham in Genesis and the New Testament. In chapters 5–6, he explores Abraham in the Qur’an and in Turkish tradition. While chapters 3–5 are based on the study of texts, chapter 6 records the results of face-to-face dialogue with nine mainstream Turkish Imams.

In summary, little overlap exists between the biblical and qur’anic Abrahams. The Bible presents a coherent Abraham narrative focusing on God’s faithful fulfilment of his promise. The Qur’an uses Abrahamic stories to illustrate the need to affirm God’s oneness and the day of judgment. The primary Abrahamic events in the Qur’an are (1) disputing with idolaters in Mesopotamia, (2) the angelic visitation, (3) building of the Kaaba, and (4) the offering of Abraham’s son. Bristow’s Turkish dialogue partners refer to fourteen extra-qur’anic Abraham stories that slightly embellish the qur’anic accounts. These dialogue partners focus on the incidents without biblical parallel, the struggle against idolatry and the building of the Kaaba.

Bristow explores the significance of these conflicting Abrahamic accounts in chapter 7. Concerning the Creation-Fall/Tawhid polarity, the qur’anic Abraham is a sinless prophet who discovers the oneness of God through creation and struggles against idolatry. In the Bible, God reveals himself to Abraham, makes a covenant with him, and proves himself faithful by keeping his promises.

Regarding the redemption/prophethood polarity, the biblical God communicates intimately with Abraham as the progenitor of the people through whom he will redeem the world. According to the Qur’an, Abraham is the model prophet who proclaims the absolute oneness of God and provides a perfect example of submission.

Chapter 8 draws conclusions concerning the potential of “Abrahamic Dialogue.” Such dialogue has limited use because the two faiths do not offer two versions of the same Abrahamic story but two different, even contradictory, stories. Reducing Abraham to an example of obedient faith, apart from the eschatological significance of the Abrahamic promise, suggests a false sense of commonality with the Islamic picture of Abraham as an example of obedient surrender.

Nevertheless, Bristow’s discussions about Abraham provide an opportunity for interfaith dialogue that produces clarity of understanding. Bristow’s narrative-worldview framework, with its three polarities, proves helpful for comparing “nonoverlapping biblical and qur’anic narratives” (p. 176). Although Abraham does not provide as good a starting place for gospel witness as might be expected, these discussions afford opportunity to present Jesus as the fulfillment of the Abrahamic promise. Bristow’s study underscores the need in Islamic contexts for interpretation that grasps the grand narrative of the Bible with an awareness of the qur’anic challenge to the biblical worldview. However, the divergence of the two worldviews, especially the way one links Abraham closely with Muhammad and the other with Jesus, exposes the flaw of trying to use the Qur’an as an authority in “contextual” Christian witness among Muslims.

This book is well-researched, well-written, and persuasive. My criticisms are minimal. Its repetitiveness is characteristic of dissertations. Footnotes would have been more user-friendly than endnotes. Despite several useful appendices, there is no index.

Everyone working within an Islamic context should read Sharing Abraham?. It is profitable for anyone wanting to understand differences between Muslim and Christian worldviews. This type of comparative interpretation enriches our understanding of the biblical text.