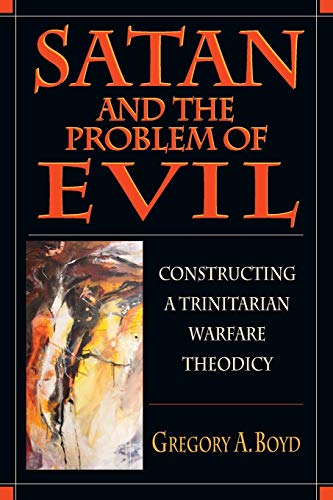 SATAN AND THE PROBLEM OF EVIL

This book is the second in a projected trilogy, the first volume of which was God at War (IVP, 1996). In the current volume Boyd develops what he calls a Trinitarian Warfare Theodicy, worked out in conscious opposition to what he terms the ‘blueprint worldview’. This includes those views, particularly Calvinism, which claim that there is a divine reason for every event that occurs in the world. The problem such a view presents for Boyd is principally that this cannot adequately deal with evil. In solidarity with Ivan Karamazov, Boyd claims that a deity who has a reason for every evil act is not worthy of worship.

However, Boyd thinks there are scriptural and philosophical reasons for rejecting this picture. In its place he offers the Trinitarian Warfare Worldview. This is predicated on the notion that God is at war with Satan, against whom there is a cosmic struggle for the souls of mankind. According to Boyd, if this spiritual warfare is taken seriously, it will solve several important problems for theodicy, including the problems of natural evil, and why God allows certain evils to take place, rather than preventing them.

The theodicy makes several important philosophical assumptions. The first is the belief that all human agents have libertarian free will. We are the ultimate explanation of our actions, not God. Second, God’s sovereignty is limited. For free choices to be really free, God must take risks in creating this world. Not the risks of middle knowledge, where God knows all possible outcomes in the future, but the risks of openness theism, where there are ‘might’ counterfactuals. That is, there are things I might, or might not do, of which God has no certain knowledge. Thus, I have the power, as Satan and all other agents have the power, to frustrate the plans of God (albeit in a limited capacity). Third, and as a result of this, Boyd believes that God does not have a reason for all things, especially evil things, because he does not ordain all things, and does not even know whether some things will occur or not. In fact, God is sometimes genuinely surprised by the things we do, things he could not have foreseen. This also explains why there are some evils God cannot prevent from happening and is powerless to undo.

This is a very thorough piece of work, containing several detailed appendices in addition to the main text. Boyd has mastery over a considerable range of material and manages to communicate complex arguments that are philosophical, theological and exegetical, in a way that is at once readable and interesting. And the central thesis, the Warfare model, is certainly a different take on the theodicy question (at least in the current debate). However, as one who stands in the ‘blueprint’ tradition, I remain unconvinced by Boyd’s defence of openness theism and libertarianism. Boyd claims that the ‘blueprint’ view cannot adequately account for evil. Only an open, risk taking, God will solve this problem. But does a limited God, blind to certain choices I may or may not make, present a more satisfactory solution?