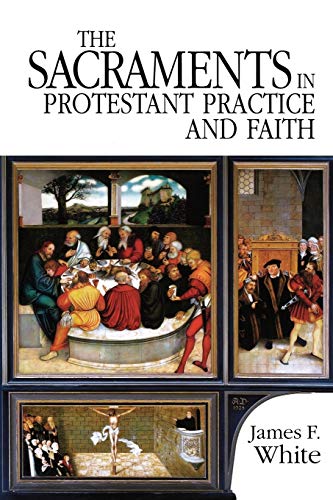 Sacraments in Protestant Practice and Faith

Dr White, who has recently been appointed to the faculty of Drew University, has taught liturgical studies for over forty years. In this brief survey he gives students an introduction to the sacraments as they have been expressed in the five major Protestant traditions—Lutheran, Reformed, Anglican, Methodist and (Ana) baptist. He begins with Augustine and does not attempt to assess the Biblical evidence one way or another, although he does indicate how the different traditions have relied on Scripture for their own interpretation and sacramental practice. Careful readers will note that the title has been subtly constructed to read ‘practice and faith’, rather than the other way round, which probably reflects the fact that it is matters of practice which are of most significance to Protestants and not questions of faith, on which they are generally less divided.

After a brief survey of the medieval tradition, including the vexed question of the number of sacraments, Dr White concentrates on baptism (including confirmation) and the eucharist. In the case of the former, baptismal regeneration (which divides most Protestants from Rome), takes a back seat to the more immediate and practical problem of infant versus believers’ baptism. Dr White presents both sides of the issue as fairly as anyone can, and indicates to what extent modern ecumenical discussions have been able to bring the different sides together. His conclusion is that we all need to take a hard look at our own church’s current practice, though he admits that this is unlikely to solve the underlying difficulty in the foreseeable future.

In dealing with the eucharist, Dr White notes that all Protestants reject the medieval doctrine of transubstantiation, and that there is a wide variety of meanings which attach to the practice in Protestant churches today. Here there is much less division than in the case of baptism, though Dr White, who is writing from an American context, feels obliged to give more than adequate treatment to such matters as the use of a common cup and/or fermented grape juice. He mentions thanksgiving, commemoration, communion and even sacrifice as features of eucharistic interpretation, and gives substantial space to the liturgical changes which have occurred in the twentieth century. Non-American readers must remember that in dealing with these changes it is the American scene that he has in mind. What he says about Methodists and Baptists cannot be assumed to apply elsewhere, though that is less true of Anglicans and Lutherans, with the Reformed group somewhere in the middle.

A concluding chapter covers the so-called sacramentals—penance, extreme unction, marriage, and ordination (confirmation having been discussed in the context of baptism), and even adds Christian burial, which must be something of a first. It certainly makes us think again about the meaning and importance of participation, which is a recurring theme elsewhere in the book.

For the evangelical reader, the main thing to notice is that the book never discusses the main protestant emphasis, which is that the sacraments are an extension of the ministry of the Word. This is particularly true in the case of the eucharist, and is of great importance when discussing such practices as the admission of young children to the sacrament. Evangelical churches which practise infant baptism see it as a means of evangelism, whereas holy communion is a challenge to those already baptised to commit their lives to Christ. Admittedly, this way of thinking has faded out to such an extent nowadays that even many evangelicals themselves are scarcely aware of it, and it hardly ever figures in ecumenical discussions. But it remains a central part of conservative Protestant belief, and as such it should have received at least some treatment in a book like this.

Dr White writes very fluently and his facts tend to be correct, though his statement (26) that ‘confirmation tended to disappear among most Protestants, except Anglicans’ will cause a few raised eyebrows among Lutherans, for whom it is an even more important ‘rite of passage’. But on the whole what he says is reliable, and that is no small achievement in a short book which covers so much ground. In conclusion we may commend it as a useful introduction to its theme, though non-Americans will need to supplement what it says about the twentieth century from other sources closer to home.