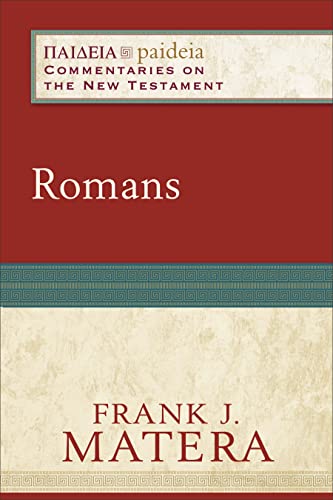 The Paideia commentary series is aimed at students and seeks to provide an accessible treatment of the final form of the biblical text with particular attention to the text in its literary and rhetorical units, leaving finer exegetical points and interaction with the secondary literature to other commentary series. Frank Matera provides the Paideia volume on Romans. Matera is professor of New Testament and Andrews-Kelly-Ryan Professor of Biblical Studies at The Catholic University of America. He has also written a volume on preaching Romans, released just a few months before the commentary.

The format of the series is already established for him, so Matera works through Romans with the usual breakdown set in the Paideia series, handling each larger thought unit by discussing (1) introductory matters; (2) the train of thought; and (3) key theological issues.

In light of the abundance of work on Romans, especially what has been produced in the past generation or so, we will be quick to forgive a response of yawning ambivalence on the part of students and pastors who learn of one more Romans commentary. Given the very specific intended audience, however, Matera’s work certainly merits attention. This series as a whole aims at M.A.-level students, seminarians, and upper-level undergraduate students interested in biblical and theological studies, and Matera provides a marvelous volume for students just beginning to seriously engage the book of Romans.

With whom does Matera align in his reading of Romans? New Perspective, Old, or some third option? Does he read mainly against the backdrop of the Greco-Roman world, or early Judaism, or both? Does he see Romans as written to Jews, Gentiles, or both? At times it is a bit difficult to tell such things, not least due to the brevity and the treatment of units rather than individual verses and words. More than this, though, Matera writes with a gracious balance that resists the parochial tribalism that tends to infect much biblical scholarship. For example, although Matera is a Roman Catholic teaching at a Roman Catholic institution, one is hard-pressed to find overt evidence of this in the commentary. As far as New Perspective issues, Matera does not consistently settle one way or the other. The important and debated passage, Rom 9:30–10:4, exemplifies this. Regarding Israel’s pursuit of the law “not of faith but of works” (9:32), Matera understands “of faith” as “an approach that trusts and relies on God” and “of works” as “human striving and exertion” (p. 242). Yet he then goes on to interpret Israel’s mistake as articulated in 10:3 (establishing “their own” righteousness) as failure to see that in Christ “God was breaking down the barriers that separated Israel from the nations in order to bring all to salvation” (pp. 244–45). The reading of 9:32 sounds like the Old Perspective, that of 10:3 like the New Perspective.

For a few quick hits to get a sense of Matera’s convictions about Romans on a macro level: the doctrine of justification “has been and remains central to Romans” (p. 23), and the “central theme” that courses through Romans is “God’s saving righteousness” (p. 27), by which Matera means “God’s saving justice as revealed in Christ for the salvation of all, Gentile as well as Jew” (p. 13). Romans 7 describes not the experience of a Christian but the experience of someone not in Christ from the vantage point of someone who is in Christ (pp. 166–67). “All Israel” in Rom 11:26 is ethnic Israel past, present, and future (p. 273).

In any commentary on a portion of Scripture as heavily analyzed as Romans, a reviewer will find numerous disagreements. One might puzzle, for example, at Matera’s reading of “resurrection from the dead” in 1:4 as the general resurrection rather than Christ’s resurrection (p. 30), his non-committal stance on issues such as pistis christou in 3:22, 26 (pp. 93–94) or the relationship between ethnic Israel and the church (pp. 119–20, 278–79), his punting on identifying the distinction between “good” and “righteous” in 5:7 (p. 134), or his conflating of obedience (hupakoē) with faith in 6:16 (p. 155).

Such idiosyncrasies are more than compensated, however, by page after page of sage and sober explanation of the biblical text. Matera’s discussion of imperatives and indicatives, for example, is wise and penetrating (pp. 161–63). What stands out above all in this commentary, however, is its clarity. In a scholarly universe in which abstruse syntax and difficult-to-trace reasoning are often mistaken for erudition, Frank Matera refuses to play such games. He marvelously attains Calvin’s supreme literary goal of “lucid brevity.” Bible students young and old are in his debt.

For seasoned readers of the Bible or well-trained pastors who already own a copy of Cranfield, Fitzmyer, Moo, or Schreiner, one need not invest in Matera’s good work. For students just beginning to build their libraries and their understanding of Paul’s most magnificent letter, however, Matera’s new work, perhaps along with John Stott’s Romans volume in The Bible Speaks Today series, will prove clarifying and rewarding.