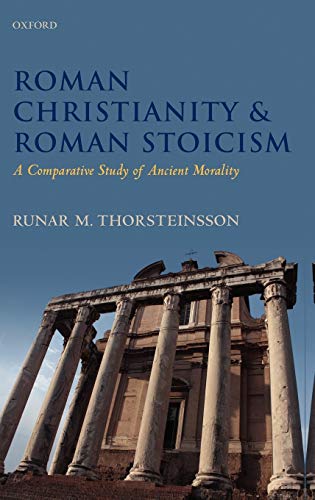 Runar Thorsteinsson’s book comparing Christianity and Stoicism in Rome in the first two centuries a.d. is a substantive contribution in what is a rapidly expanding field of scholarship comparing the NT and Hellenistic moral philosophy.

To introduce his book, Thorsteinsson notes that from the earliest period of Christian history, Stoicism and Christianity were thought by many to have striking similarities, especially regarding ethics. However, he also notes that in the last century and a half many scholars have begun comparing Stoicism unfavorably with early Christianity, particularly in arguing that Stoicism is wholly self-centered. In contrast, Thorsteinsson insists that a truly historical-critical point of view demands that Stoicism and early Christianity be compared apart from preconceived notions of whether one perspective is ethically superior.

In order to engage in a systematic comparison, Thorsteinsson examines the writings of three Stoics (Seneca, Musonius Rufus and Epictetus, in chs. 1–4) and three early Christian letters (Romans, 1 Peter and 1 Clement, in chs. 5–8), all of which he argues are associated with Rome in some way in the first century.

The main argument in chapters 1–4 is that Roman Stoicism has an exalted view of love, caring for others, and a basically other-minded focus, an ethic grounded in the Stoic view of universal humanity and human participation in the reason/divinity that holds the universe together. While there are differences among the three Stoics surveyed, they are united in their focus on doing good to others. Furthermore, contrary to misconceptions, many Stoics emphasize the theological grounding of ethics.

Chapters 5–8, on Roman Christianity, emphasize that the central ethic of the believing community is love directed toward others within that community. While there are differences in the three writings surveyed, these are ultimately inconsequential.

Chapter 9 compares the ethical teachings of the two systems, which Thorsteinsson finds to be strikingly similar: he notes that both emphasize worship as the proper mode of human life, that both prize logical thought and practical virtue, that both systems base their ethics on imitation (of Christ and of the Stoic sage, respectively), and that both emphasize love and non-retaliation. However, chapter 10 highlights the major difference between the two systems: whereas Stoicism teaches universal love (based on its view of universal humanity), Christianity circumscribes love to within the believing community, although urging other virtuous stances toward outsiders (respect, patience, etc.).

In appreciation, Thorsteinsson’s book helpfully removes several misconceptions about the kind of Stoicism contemporary with Paul. He has shown clearly that Roman Stoicism has a very important social component, and that even virtues such as loving one’s enemies are present in important Stoic figures. However, this aspect of Thorsteinsson’s book ends up being something of a double-edged sword for his argument. Throughout his book Thorsteinsson insists that Roman Stoicism is just as outwardly focused as early Christianity and that scholarly disapproval of Stoic ethics stems largely from a Christian bias among scholars. Ironically, however, Thorsteinsson appears to have actually (although unintentionally) adopted a Christian view of morality as well. While this reviewer is certainly not opposed to doing this, it does seem strange that Thorsteinsson attempts to vindicate Stoicism by showing that it too is just as morally respectable as early Christianity, all along appearing to accept that Christianity is the moral standard by which all else is judged! The inherent inability of a strictly historical-critical interpretation to even assess the goodness or badness of an ethical system becomes obvious in this approach.

Problems also emerge in Thorsteinsson’s approach to comparing Stoicism and Christianity. From the outset he is intent on showing the similarities between the two systems, since he believes older approaches inappropriately focused on differences. One wonders, however, why a comparison should focus on similarities or differences. Should not rather the two bodies of literature be interpreted according to the specific interests of the texts themselves and then compared? Thorsteinsson is indeed able to show high-level, structural similarities between the two systems (e.g., both are socially oriented), but in so doing he manages (for the most part) to mask massive dissimilarities on points of detail. For example, even though he occasionally notes dissimilarities such as the Christian view of Christ as savior, Thorsteinsson appears to view such dissimilarities as basically insignificant. One wonders, however, if the way in which Paul grounds his ethical exhortation in the believer’s spiritual death and resurrection with Christ (in Rom 6, for example) can be discarded in the interests of showing that both Paul and Stoicism inculcate socially directed attitudes in their followers. Other examples could be multiplied, including the importance of Christ’s and the believer’s resurrection in Romans, as well as eschatological judgment (see Rom 2:6, etc.), both of which are ideas that would have been nonsensical, or even immoral for a Stoic, but which are foundational for Christian ethics. In essence, a focus on high-level, structural similarities at the expense of the details of the two ethical systems is bound to obscure the differences and similarities between Stoicism and Christianity as much as scholarship that is focused almost exclusively on differences.

In sum, this book is an interesting presentation of the moral worlds of Roman Stoicism and Christianity, the similarities of which have long been noted. However, it must be said that Thorsteinsson often overstates the similarities (which are real, but which usually do not go beyond such high-level ideas as both systems being oriented toward the welfare of others) at the expense of some of the most fundamental differences between the two systems of thought.