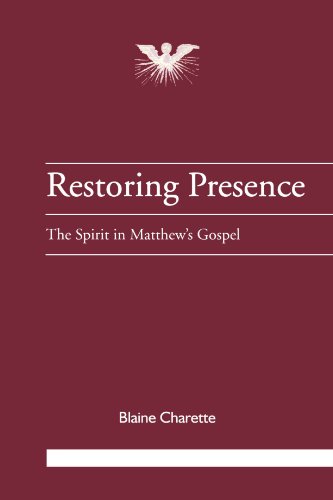 This is a well written and enjoyable book which starts from the observation that Matthew’s Pneumatology has been neglected. Charette’s stated purpose is not to argue that Matthew’s contribution to Pneumatology is as significant as that of Luke or John, but to demonstrate that there is in Matthew a thoughtful and carefully nuanced description of the Spirit’s activity. Thus he notes that although Matthew’s Gospel pays less attention to the Spirit than does John’s, yet it goes beyond Mark and compares favourably with the contribution to Pneumatology found in Luke’s Gospel.

Charette’s thesis is that Matthew tells the story of God’s eschatological redemption in which Spirit plays a decisive role. Matthew’s perspective is shaped by that of the OT.

Three main chapters each discuss one of three themes which Charette identifies as programmatic in Matthew 1:21. These are christology (Spirit and Messiah); soteriology (Spirit and redemption); ecclesiology (church and messiah).

Chapter one concerns the relationship between Matthew’s christology and pneumatology. It demonstrates that it is the Spirit of God who gives both impetus and direction to the messianic mission, and that this can be seen clearly in the activity of the Spirit at key moments in the life of Christ, such as his conception (1:18, 20), baptism (3:16) and temptation (4:1).

So too Charette argues in chapter two that when at 27:50 Jesus is said to give up his spirit, that this is in fact a reference to the Spirit. He finds here a prolepetic reference to Pentecost: just as John and Luke both show that Jesus gave the Spirit to be God’s presence among his people for the period after the risen Christ was exalted to heaven, so too Matthew describes a similar progression.

Chapter three takes this further. God’s Spirit has not only gone from the dying Jesus to those who would follow him, but so too it has left the temple through the torn veil. Whereas once the Jerusalem temple was the place of God’s presence, now the eschatological community replaces the temple by becoming the eschatological temple. This means that Christian disciples carry on the prophetic and charismatic ministry of Jesus, empowered by the same spirit through whom he worked, enabled by that Spirit to reflect the practice, righteousness and integrity of Christ.

Whether all Charette’s arguments can bear the weight put upon them is uncertain. It seems difficult to see Matthew 28:19 as a reference to baptism in the Spirit, for example (at least in the way that the phrase is usually understood in Evangelical/Charismatic/Pentecostal usage). His reference to the Spirit as having departed from Israel relies on Jeremias, and Charette does not include in his bibliography an influential article by Levenson (NTS 43) which makes this position difficult to defend. Also absent is any reference to an article by Keck (FS Meeks, 1995) which argues strongly against Charette’s emphasis on the Spirit as present in place of Christ. Keck suggests that it is precisely the continuing presence of a Jesus who does not leave his disciples, which means that he neither promises nor imparts the Spirit (28:20) and Charette (to this reviewer) does not overturn this exegesis.

Overall therefore Charette’s thesis does not always convince—yet this remains a gripping book which warms the heart as well as challenges and feeds the mind. Theologically speaking, it seems impossible to deny that God was and is at work by his Spirit in the ways that Charette suggests. Yet it is not clear that all his exegetical decisions are of equal value, nor that all of his theology can be constructed from an exegetical reading of Matthew.