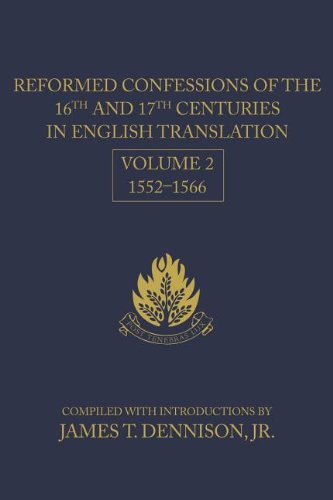 James Dennison Jr., academic dean of Northwest Theological Seminary in Washington and professor of church history and biblical theology, has now produced the second of his projected four volumes of Reformed confessions of the sixteenth and seventeenth centuries. Volume one compiles Reformed confessions from 1523 to 1552, and volume two from 1552 to 1566, many of which are translated into English for the first time. The English-speaking world now has access to numerous Reformed confessions that serve as a window into the history and theology of the Reformed tradition internationally. The thirty-five confessions are arranged chronologically, and Dennison introduces each with a brief sketch of its historical background and significance. While readers will recognize standard confessions of the Reformed faith such as the Belgic Confessions (1561), Heidelberg Catechism (1563), and Second Helvetic Confession (1566), many, if not most, of the confessions will be new to many even in the Reformed tradition. Confessions in volume two include:

While justice cannot be done to each of these confessions in this review, several deserve mention. First, the Confession of the Italian Church of Geneva (1558), which Dennison translates from the Latin, is an important inclusion. In May 1558, Calvin wrote to Peter Martyr Vermigli explaining the difficulties being experienced by the Italian congregation in Geneva, specifically over the doctrine of the Trinity. The theology of Michael Servetus was resurrected by the Italian anti-Trinitarians Giorgio Biandrata, Matteo Gribaldi, Paolo Alciati, and Giovanni Valentino Gentile. While Calvin listened to Biandrata in personal interviews, it became obvious that at root was an anti-Trinitarianism that was beginning to spread like a disease in the Italian church. Therefore, the Confession of the Italian Church in Geneva was written “because some . . . have deviated from the pure and true faith . . . as to the one and simple essence of God and the distinction of the three persons” (p. 113). Such deviation was apparent with Gentile, for example, when he argued for a “Trinity of persons of decreasing potency from the Father to the Son to the Holy Spirit” (p. 112). Gentile was not shy in his rejection of Calvin’s doctrine of the Trinity. Yet the Italian Church followed Calvin by arguing that the person of the Son is “still the true and natural Son of God, having thus united the two natures . . . still preserving the properties of each of the two natures” (p. 114). Here we see only the beginnings of the anti-Trinitarian battles that would characterize the Reformed churches (cf. Synod of Torda and Synods of Gyulafehérvár and of Marosvásárhely).

A second noteworthy confession is the Guanabara Confession (1558). In 1555, Nicholas Durand de Villegaignon founded a French colony on the island of Dieppe in Guanabara Bay, Brazil. Villegaignon wrote to Calvin requesting ministers from Geneva and extended a welcoming hand to persecuted Huguenots. Villegaignon received Calvin’s support in the commissioning of Pierre Richer and Guillaume Chartier, Calvinism’s first overseas New World missionaries, and in 1557, a Calvinist church was established. Unfortunately, the entire enterprise went wrong when Villegaignon became antagonistic with the Huguenots’s Calvinistic theology and decided he would return to the Roman Catholic faith. Fifteen Huguenots were expelled, and though they made their way back to Europe, five of them returned to Brazil instead. However, after wandering through the jungles of Brazil, they were arrested by Villegaignon, who “demanded that they respond to certain theological questions he posed by way of a confession” (p. 118). Sadly, with one exception, the signatories were all executed by drowning. Despite this tragedy, the Guanabara Confession is a testimony to this day of the zeal Calvinism has had in seeing the free offer of the gospel spread to unreached territories.

Many other confessions make Dennison’s volume valuable. For example, the French Confession (1559) demonstrates the influence that Calvin’s theology had on the National Synod of the Reformed Churches of France in Paris. The confession, drafted in the midst of persecution, was sent to Calvin for his endorsement as it closely followed his Institutes. Disagreement continues over whether Calvin authored the “augmented version or whether he enjoyed the collaboration of Beza and Viret” (p. 140). Other valuable contributions in Dennison’s volume include the Geneva Students’ Confession (1559), the Confession of Faith in the Geneva Bible (1560), and Theodore Beza’s Confession (1560) at Poissy (1561), all of which exhibit the influence Calvin’s theology had on his disciples. Scholars will also be pleased to see the insertion of the Hungarian Confessio Catholica of 1562 (over two hundred pages), a robust example of Calvinism’s theological penetration into Hungary.

Dennison’s second volume is a significant contribution to the ongoing study of Reformed theology. Volume two not only includes the most common Reformed confessions still used today but also rare confessions often forgotten but nonetheless important to understanding the history and development of Calvinism internationally.